NEW ALBANY, Ind. (CNS) — Defending the religious rights of the Catholic Church against the government’s contraceptive mandate is tied to the church’s ministry to those in need, Baltimore’s archbishop told a New Albany audience Nov. 29.

The church’s worship life and its faith-driven ministries to the poor and others cannot be separated from one another, Archbishop William E. Lori said in a presentation to members of Our Lady of Perpetual Help Parish, the parish of his youth.

Like many people around the country, he was visiting family for Thanksgiving. He spent the holiday with his parents, Francis and Margaret Lori, who are members of St. Anthony of Padua Parish in Clarksville. 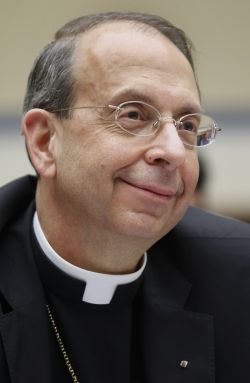 Bishop Lori is pictured during a Feb. 16 hearing on Capitol Hill in Washington. (CNS photo/Bob Roller)

His presentation, “The Defense of Religious Liberty and Service to the Poor,” took place just days after the U.S. Supreme Court chose to take up two legal cases brought by for-profit companies that challenge the Health and Human Services’ mandate that all employers, including most religious employers, provide employees with insurance coverage of contraceptives, abortifacients and sterilizations.

The court will take up the cases of Hobby Lobby, an Oklahoma-based, family-run arts-and-crafts chain, and Conestoga Wood Specialties, a Pennsylvania family-run company that makes cabinets. The companies’ Christian owners object to all or part of the mandate on moral grounds.

Archbishop Lori explored his topic in light of Pope Francis’ “unmistakable emphasis … on the role of the church in serving the poor.”

He described the challenges of those in need in Baltimore, how he lives close to them and how the Catholic Church there serves them in, among other ways, a homeless shelter for women and in a soup kitchen close to his home.

“Is there any way the church could be the church and not respond, not only with prayers and personal concern but also with practical assistance?” Archbishop Lori asked. “Who would ever want to endanger such an operation in the face of such great need?

“Yet as the church has struggled against the Health and Human Services’ so-called preventive services mandate, this question has come to the fore.”

He went on to note that the Catholic Church is “looking for every legal avenue to provide good health insurance to our employees that is also in accord with the church’s teaching while robustly carrying forward our ministries of service.”

The HHS mandate includes an exemption for some religious employers that fit its criteria and has an accommodation for others that allows some employers to use a third-party to provide the contraceptive coverage they find objectionable, but Catholic entities say the accommodation still does not solve their problem over being involved in providing coverage they reject for moral reasons.

Multiple lawsuits working their way through the courts have been filed to fight the mandate on behalf of church entities, religious colleges and faith-based institutions.

In trying to show that the effort to defend religious liberty is tied closely to the church’s ministry to those in need, Archbishop Lori recalled an address given in 2009 by the future Pope Francis in which he said that the church, in caring for the poor, must treat them like subjects, not as objects “‘targeted by paternalistic and interventionist action of the state and other organizations.'”

“When we view those we are privileged to serve not as objects of our largesse but rather as subjects,” Archbishop Lori said, “then the importance of religious liberty becomes clear. Subjects — human beings — have rights and liberties. Objects — commodities, statistics and trends — do not.”

He also noted that, because the people served by the Catholic Church through its ministry of charity are human subjects, the church must seek their “integral human development,” which includes nurturing their relationship with God and protecting their “transcendent dignity.”

“As we seek to meet the immediate needs of the poor and vulnerable, as we seek to promote efforts that bring about authentic human development,” Archbishop Lori said, “we do no one a favor by compromising religious freedom, by acquiescing to the creation of a society where more and more the government can privatize religious faith or otherwise discourage it by promoting an aggressive secularism.”

In fact, he said, religious liberty and the ministry of charity are closely interrelated.

“The same Gospel that impels the church to offer compassionate care to others also constrains it from acting in ways contrary to human dignity,” Archbishop Lori said. “And just as the church is enjoined by the Gospel to work toward integral human development, so too, it is called to conduct that work with integrity, without moral compromises that would undermine the very basis of its works of mercy, charity and justice on behalf of those most in need.”

He noted that the HHS mandate seeks to drive a wedge between the church’s faith and worship, on the one hand, and its service to those in need on the other.

“But that’s not what it means to be Catholic,” Archbishop Lori said. “As Pope Francis has said, we can’t be ‘part-time Christians.’ We must ‘live out our faith at every moment of every day.'”

In addition, he warned that the mandate could pave the way for future restrictions of religious liberty.

Finally, he noted that the mandate endangers the church-related ministries that serve those in need by “imposing steep fines on schools, hospitals and charities that choose not to act against their convictions. These fines would greatly burden these ministries and their ability to serve those who rely on them.

“As you can see, our struggle against the HHS mandate is not about the small print,” Archbishop Lori said. “It is about protecting the church’s ability to serve the poor in dignity and truth, in proclaiming and acting upon the Gospel, as Pope Francis has said, ‘in its entirety.'”

NEXT: With ‘ministry of presence,’ friars offer holiday shoppers hospitality