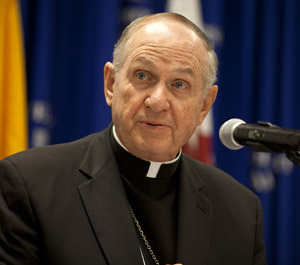 WASHINGTON (CNS) — The interim multilateral accord that could put the brakes on Iran’s nuclear development program is a steppingstone for a long-range deal that “enhances genuine peace in the region,” according to Bishop Richard E. Pates of Des Moines, Iowa, chairman of the U.S. bishops’ Committee on International Justice and Peace.

In a Nov. 27 letter to Secretary of State John Kerry, Bishop Pates lauded the “tireless efforts to negotiate an agreement that allows continued dialogue with Iran on this crucial issue.”

“I understand that this accord provides a six-month period for further negotiations and confidence-building measures. The goal is to reach a more comprehensive agreement that would settle the crucial questions related to nuclear enrichment and nuclear nonproliferation,” the bishop added. “We welcome this step and hope that this interim agreement will allow all parties to negotiate further (and) build mutual confidence and trust.”

The interim agreement, reached Nov. 24, is intended to restrict Iran’s nuclear program to peaceful purposes. The five countries that are permanent members of the U.N. Security Council — the United States, Russia, China, the United Kingdom and France — as well as Germany negotiated the deal with Iran.

Some in Congress, wary of making a deal with Iran, have advocated increasing sanctions. President Barack Obama, in affirming the tentative deal, pledged no new sanctions would be levied, although current sanctions would remain in effect. Iran, though, will get an estimated $6 billion in temporary sanctions relief for signing the pact.

“We will continue to aggressively enforce our sanctions over the next six months, as we work to determine whether there is a comprehensive solution that gives us confidence that the Iranian nuclear program is for exclusively peaceful purposes,” said Kerry in Switzerland, where the negotiations took place. Further talks for a permanent, long-term accord would need to take place in the next six months.

In his letter to Kerry, Bishop Pates said, “A diplomatic solution with Iran is greatly preferable to military action, which could have unpredictable and negative repercussions for the region.”

David Kenner, in a Dec. 1 essay for Foreign Policy magazine, said the Iran accord is in keeping with Obama’s desire to halt the spread of nuclear weapons.

Kenner noted that early in his presidency, Obama “told a crowd in Prague that he would work toward ‘a world without nuclear weapons.’ Now, it may just be the cause that defines his administration’s foreign policy legacy.” Early in his first term, the New START treaty, which led to joint nuclear weapons reductions with the Russians, was approved; Kerry was then chair of the Senate Foreign Relations Committee, which shepherded the treaty through the Senate.

The Iran accord comes on the heels of a separate deal Obama signed off on negotiated between Russia and Syria that would gradually destroy Syria’s stockpile of chemical weapons.