Catholic leaders repeated call to Congress to help poor throughout 2013 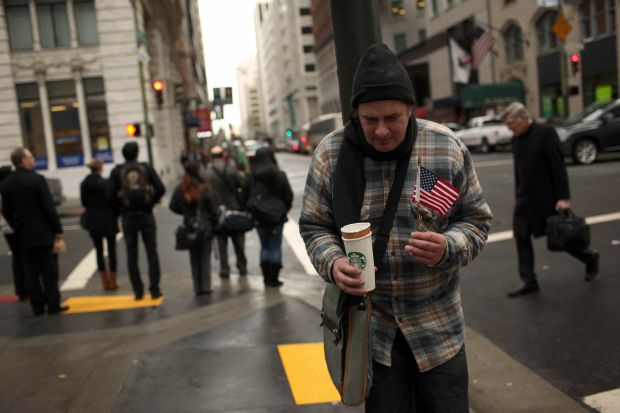 WASHINGTON (CNS) — Fallout from the partial government shutdown in October and another looming round of automatic spending cuts in January kept congressional leaders busy at year’s end to finalize a budget deal Republicans and Democrats could live with.

Through a tumultuous 2013, the U.S. Conference of Catholic Bishops and other Catholic advocates, including Catholic Charities USA, continued to press for a budget that does not adversely affect poor people.

It’s a message that Catholic leaders have consistently delivered in recent years under the banner of a “circle of protection” as concerns over growing federal debt led to proposals that discretionary spending on nonmilitary programs be cut in the face of the country’s growing debt.

The USCCB helped form the Circle of Protection coalition in 2011 to make sure budget policies protect programs serving poor, vulnerable and elderly people.

On Dec. 10, congressional leaders announced a budget deal aimed at averting another government shutdown and stopping a second round of automatic budget cuts set to begin in mid-January. The two-year deal, announced by Sen. Patty Murray, D-Wash., and Rep. Paul Ryan, R-Wis., chairs of the Senate and House budget committees, respectively, caps spending at slightly more than $1 trillion in each of the next two years — a slight increase.

The House passed the package two days later. The Senate approved it Dec. 18.

The deal signaled at least a temporary truce on the budget between Democrats and Republicans. Both houses of Congress managed to pass the Budget Control Act in 2011, which implemented a round of across-the-board cuts in military and nonmilitary programs early in 2013. However, serious disagreements remained and they led to a 16-day partial government shutdown in October.

Under the agreement, $63 billion in a second round of across-the-board cuts in military and non-military programs set for mid-January would be eliminated. The proposed budget also would reduce the deficit by a modest $23 billion by continuing the 2 percent reduction in payments to Medicare providers through 2023.

The budget deal now will allow Congress to focus on the growth in entitlement and health care that have been the major drivers of the country’s growing debt.

Representatives affiliated with the Tea Party had opposed any deal that increases government spending, leaving House Speaker John Boehner, R-Ohio, to rally moderate Republicans to join Democrats in supporting a budget bill. Passage in the Democrat-controlled Senate was expected.

The final budget bill measure does not extend unemployment benefits for the long-term unemployed that were set to expire beginning Dec. 28. Democrats wanted to extend benefits to give federally paid payments to jobless people after their 26 weeks of state benefits expire.

Republicans in the House were not opposed to extending the benefits, but said they had no plans to pursue legislation on their own. AP reported that House Democrats “suppressed” their disappointment those benefits were not being extended so the measure could move on to the Senate for a vote, and President Barack Obama’s expected signature.

Father Larry Snyder, Catholic Charities USA president, has been among the Catholic advocates calling for the extension of unemployment benefits in the face of a slow economic recovery.

In Dec. 13 statement, Miami Archbishop Thomas G. Wenski, the new chairman of the U.S. Conference of Catholic Bishops’ Committee on Domestic Justice and Human Development, commended Ryan and Murray for embracing civil dialogue and setting aside partisanship in crafting a modest replacement to sequestration.

“Millions of working families across the country and around the world struggle to survive and achieve stability. While this agreement is an important first step to accomplishing that, more needs to be done,” the archbishop said. “Congress and the administration still face serious and consequential decisions regarding appropriations for fiscal year 2014.”

Archbishop Wenski reiterated Catholic leaders’ call for a “circle of protection” around the vulnerable.

He urged “wise bipartisan leadership in targeting this limited sequestration relief by drawing a circle of protection around programs that protect poor and vulnerable people at home and abroad, advance the common good, and promote human life and dignity.”

“Targeted properly, this funding can also provide some certainty to charitable and social service organizations planning their budgets, and hopefully create more jobs with decent wages,” he added.

In November, the chairmen of two USCCB committees reiterated the central message of the Circle of Protection in letters to the leadership of the congressional budget committees, Bishop Stephen E. Blaire of Stockton, Calif., then chairman of the bishops’ Committee on Domestic Justice and Human Development, and Bishop Richard E. Pates of Des Moines, Iowa, chairman of the Committee on International Justice and Peace.

Their core message: Every budget decision in Congress “should be assessed by whether it threatens human life and dignity” at home and abroad. The letter continued, saying that the “central moral measure of any budget proposal is how it affects ‘the least of these.'”

“Government and other institutions have a shared responsibility to promote the common good of all, especially ordinary workers and families who struggle to live in dignity in difficult economic times,” the letter added.

NEXT: Push for measures to limit gun violence continues despite roadblocks