Push for measures to limit gun violence continues despite roadblocks 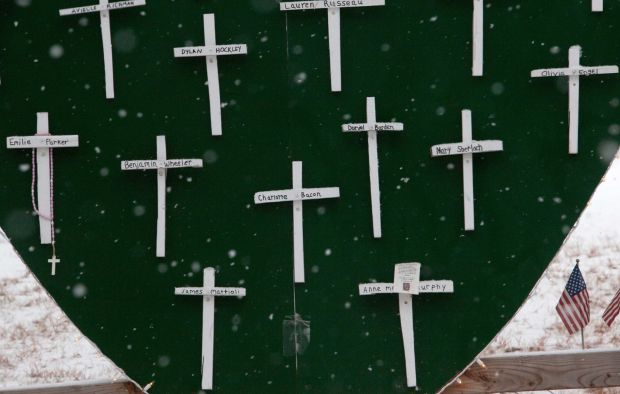 Snowflakes float over part of a memorial for the victims of the Sandy Hook Elementary School shooting in Newtown, Conn., Dec. 14, the first anniversary where 20 children and six adults were killed by gunman Adam Lanza. (CNS photo/Michelle McLoughlin, Reuters)

WASHINGTON (CNS) — The Senate’s inability last spring to pass a bipartisan plan to expand gun background checks despite strong nationwide sentiment in favor of it is motivating a broad coalition of advocates to promote gun violence prevention laws.

From grass-roots petition campaigns to sign-on letters from organizations such as Faiths United to Prevent Gun Violence, the efforts are focusing on members of Congress who have consistently opposed such legislation.

Vincent DeMarco, national coordinator of Faiths United, knows how difficult the effort can be given the strong influence of pro-gun rights groups on Congress even in the wake of the violence of Dec. 14, 2012, in which a lone gunman killed 20 children and six adults at Sandy Hook Elementary School in Newtown, Conn.

The advocacy groups want to see several provisions aimed at reducing gun violence enacted at the federal level. They came close in April when amendments to a firearms measure garnered 55 votes in the Senate. Sixty votes were needed for passage under Senate rules, however.

The amendments would have expanded background checks for gun purchases under a compromise deal reached by Sen. Joe Manchin, D-W.Va., and Sen. Patrick Toomey, R-Pa., both of whom are Catholic. Other provisions of the bill called for increased penalties for gun trafficking, reinstituting the assault weapons ban and restricting civilian access to high-capacity ammunition magazines.

Similar measures are in a bill drafted by Rep. Peter King, R-N.Y., and Rep. Mike Thompson, D-Calif., who also are Catholic. Their Public Safety and Second Amendment Rights Protection Act was sent to the House Subcommittee on Crime, Terrorism, Homeland Security, and Investigations April 30. No hearings have been scheduled.

The measures in both pieces of legislation were cited in a Dec. 9 letter to Congress from Faith United and 54 faith leaders including 15 Catholic representatives.

Among the signers were Archbishop Thomas G. Wenski of Miami, chairman of the U.S. bishops’ Committee on Domestic Justice and Human Development; Father Larry Snyder, president of Catholic Charities USA; and Sister Patricia Chappell, a Sister of Notre Dame de Namur, who is executive director of Pax Christi USA.

“We have an obligation to protect life and that obligation trumps the desire that some have in our society for dangerous and life-threatening amusements,” Father Snyder explained to CNS Dec. 18 when asked why he signed the letter.

“If you look at what we’re asking for from Congress, to me, they are just very common sense things,” he continued. “The majority of Americans already support background checks, so why is it so difficult (to get this passed)?”

The letter comes with no federal legislation on the horizon while gun violence, at times marked by mass shootings in public settings, continued in the year since the events in Newtown.

The premise is not unfounded.

The Centers for Disease Control and Prevention reported in May in its National Vital Statistics Reports that 31,672 people died by some type of firearm in 2010, the most recent year for which data has been compiled and analyzed. The total includes homicides, suicides, accidents and legal interventions.

Because of a lack of movement at the federal level, grass-roots groups have turned their efforts to state legislatures. In a report issued in early December, the Law Center to Prevent Gun Violence and the Brady Campaign to Prevent Gun Violence said that eight states enacted significant laws while 13 states took smaller steps to implement gun safety legislation.

Laura Cutiletta, senior staff attorney at the Law Center to Prevent Gun Violence, said the effort in the states has been aided by a group of mothers who have organized since the Newtown shootings. Moms Demand Action for Gun Sense in America, which celebrated its first anniversary Dec. 15, has made its presence known in legislatures across the country, she said.

“It’s the network we now have across the country (that is making a difference) and it happens to be moms who responded around the country. It’s because there are boots on the ground everywhere,” Cutiletta told CNS.

Maryland’s new gun law in particular has been cited by advocates. As of Oct. 1, Marylanders must meet fingerprinting and training requirements before buying a gun. The law also bans 45 types of assault rifles and magazines that hold more than 10 rounds, and includes steps that make it more difficult for mentally ill people to obtain a gun.

DeMarco credited the Maryland Catholic Conference for its role in the law’s passage.

Despite the widespread Catholic involvement to reduce gun violence, at least one Catholic is opposed to what he considers to be an infringement upon Second Amendment rights.

Known for his marksmanship in defending an Italian village from marauders in the 19th century, St. Gabriel Possenti is the patron saint of handgun users.

“Bishops have a right to speak out on moral issues, but their authority doesn’t extend to political issues in which they have no understanding,” Snyder told CNS Dec. 17.

“The bishops, who I hate to criticize, don’t know what they’re talking about. I think they’ve fallen victim to a lot of errant propaganda by people who wish to see Americans disarmed,” added Snyder, who said he worked for the National Rifle Association from 1966 to 1974.

The NRA did not respond to requests for an interview.

Gun violence prevention advocates said, however, the Newtown incident has galvanized the public to support sensible limits on gun ownership.

“Newtown, to me, is like the Birmingham (Alabama) police riots during the civil rights era,” DeMarco said. “Newtown woke up the country. The same kind of momentum is there on gun violence prevention.”