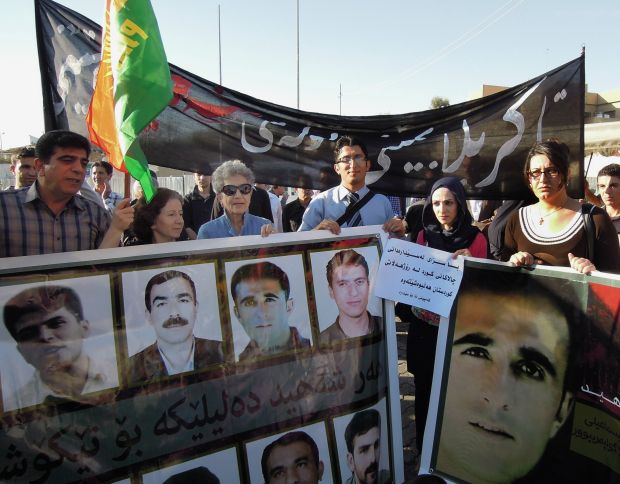 MARYKNOLL, N.Y. (CNS) — After decades of missionary service in Tanzania and Kenya, Maryknoll Sister Rosemarie Milazzo is paving the way for peace in Iraq, a country long marked by ethnic and political unrest.

She returned Nov. 27 from a three-month stint to support the rights of ethnic Kurds in the Middle East.

In a Dec. 4 interview with Catholic News Service at the Maryknoll Sisters motherhouse, Sister Rosemarie said, “You can’t call yourself a Christian if you don’t spend as much time and money on making peace as is spent on making war.”

Sister Rosemarie said she was called to “active peace work” in 2009. Now, she spends three months in Iraq each year as a witness, activist, mediator and listener with Christian Peacemaker Teams, an international organization. “We go to places of lethal violence and bring nonviolent methods of peace-making,” she said.

Most recently, Sister Rosemarie was part of a four-member international team based in Sulaimani, in the autonomous Kurdistan region of Iraq.

Living and working out of rented office space across the street from a mosque, the group documented human rights violations against women and ethnic Kurds, accompanied villagers living in conflicted border areas, protested against oil drilling on traditional farmland and joined local partners in Iraq to demonstrate against violence and injustice throughout the region.

In addition, the team served as independent monitors to a contested election in Kurdistan.

It also gave sanctuary to women in imminent danger of violence and death. “Sharing our space with them enabled me to get to know them well and hear their stories. I am humbled by their courage and their struggle to protect their children as well as themselves,” she said.

Sister Rosemarie said the presence of international witnesses at court proceedings, demonstrations and polling places seems to offer security and remind authorities that issues resonate beyond local borders. “It adds more weight in favor of victims, because we are an international human rights group,” she said.

She described multiple visits to Hajji Hussein, a Kurdish businessman imprisoned in Iraq for bribery. The husband and father of five was arrested, tortured, found innocent and released, Sister Rosemarie said. He sought medical treatment in Germany but was re-arrested on a restatement of the same charge when he returned home voluntarily.

“He denies the bribery and any connection to a bigger plot. The court case keeps getting postponed. I left him in prison,” Sister Rosemarie said.

“We write up these cases and disseminate the information widely. The publicity will keep him from being harmed,” she said, optimistically.

Sister Rosemarie said her group was asked to participate in a demonstration against atrocities in Iran. Kurdish people “carried pictures of relatives hanged in Iran and spoke passionately about their loved ones. They brought a golden noose and burned it as a symbol,” she said.

“I met one woman who told me that two of her sons were in prison. She did not know if they were dead or alive. I could feel her pain and when I held her, she told me that she was heartbroken, but also very proud that her sons were willing to die for their country,” Sister Rosemarie said.

There are other dramatic reminders of the fighting in the region, Sister Rosemarie said. When she visited internally displaced people several years ago in a border village that had been attacked, dinner conversation was punctuated by a man across the table who “pulled off his prosthetic leg. He said, ‘I lost a son, a brother and a leg in the bombing,'” she recounted.

Sister Rosemarie said the Kurdish people in Iraq, Turkey, Syria and Iran would like to unite as a sovereign state.

She met with Syrian refugees living in United Nations camps run by the Kurdish government and also those living in cramped private homes with relatives.

“There are 20 people in little houses with no electricity, but it’s worse in the tents in the camps,” she said. “It’s always very difficult for refugees. You want to keep your family together.”

She said Syrian refugees are not allowed to have work visas, so they have no income. Although they would prefer to live with their families, the government wants them to stay in camps and restricts distribution of certain items, such as kerosene, to refugees in the camps, she said.

Sister Rosemarie met French monks and German women religious who fled Syria to avoid becoming a danger to the community they served. In Kurdistan, she said Christians are allowed to practice their religion freely. While in Sulaimani, she worshipped at a Chaldean Catholic church, but was inspired by the call to prayer five times a day from the mosque in her neighborhood. “I always felt it was a call to prayer for me, too, so I stopped what I was doing to join in prayer.”

She said the concept of women religious does not translate easily, but the Muslim Kurds thanked her for her efforts. “They have great respect for someone who would choose to be a church person and choose not to marry and have children and grandchildren. I felt welcome and stretched” by participating in a group that relies on human commonalities to communicate and break through barriers, she said.

Sister Rosemarie said she is mindful of security, but committed to continuing her ministry of presence. “Whatever these people go through, we go through. We’re equally vulnerable. We do walk in places others might not be comfortable, but it’s a privilege.”