Best gift in life is encountering Christ, pope says at start of Advent 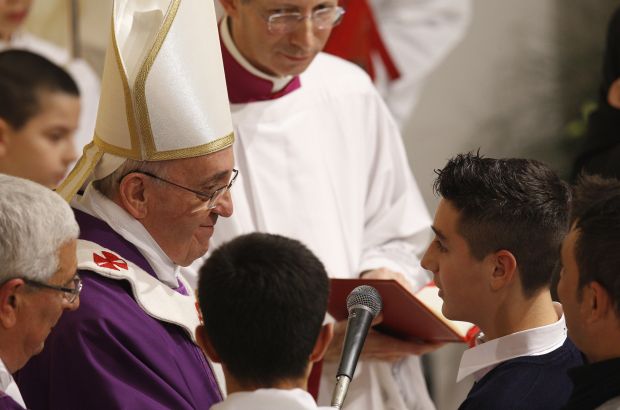 Pope Francis greets a young man after administering the sacrament of confirmation to him during Mass at the Parish of San Cirillo Alessandrino in Rome Dec. 1. (CNS photo/Paul Haring)

VATICAN CITY (CNS) — The best present in life is encountering Jesus — an encounter that will last a lifetime, Pope Francis said.

A Christian’s whole life “is an encounter with Jesus: in prayer, when we go to Mass, when we do good works, when we visit the sick, when we help the poor, when we think of others, when we’re not self-centered, when we are amiable,” he said in a homily given at a Rome parish Dec. 1.

“We always encounter Christ in these things and the journey of life is exactly this: walking to encounter Jesus,” he said.

Beginning Advent for the first time as pope, Pope Francis visited the parish of San Cirillo Alessandrino in a neighborhood on the outskirts of Rome.

Before celebrating Mass, he met with the sick, children who recently received their first Communion, and — accompanied by their parents — children baptized in the past year. He also heard confessions from a few parishioners and met with a group of young men he confirmed during the evening Mass.

The pope apologized to parishioners for any inconveniences caused by his visit, be it “excessive organization, security, fear; please know that I don’t agree. I’m on your side,” he said.

Some news reports said a beefed-up police presence was also due to protests calling for more affordable housing. The pope later met with some of the activists. 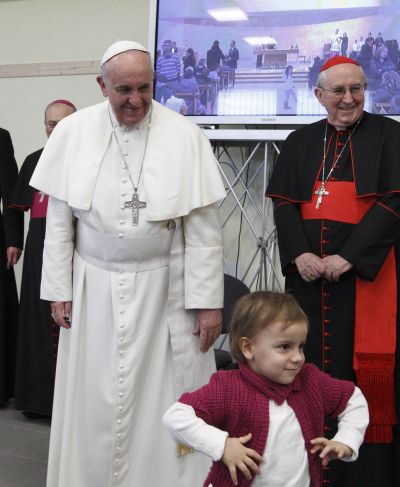 A child walks away after greeting Pope Francis during his visit to the Parish of San Cirillo Alessandrino in Rome Dec. 1. At right is Cardinal Agostino Vallini, papal vicar for Rome. (CNS photo/Paul Haring)

In his homily, the pope asked the congregation if it were true that church life ended with the sacrament of confirmation, saying he’s heard it’s also known as the “sacrament of adieu” because it’s often the last time people go to church.

Encountering Christ is not a one-time event, “we encounter him every day,” he said.

However, some people, especially those who lived a life of sin, may think “How can I encounter Jesus,” he said.

“But, you know, the people Jesus tried to find most of all were the biggest sinners,” he said.

While those who believed they were without sin would admonish Jesus for keeping company with sinners, Jesus would tell them, “‘I have come for those who need good health, who need healing,'” the pope said.

“When we sin, Jesus comes and forgives us” in confession, he added.

“Do you want to met Jesus in your life,” he asked the young men he was about to confirm. With the help of the Holy Spirit and the sacraments, “you will have more strength for this journey.”

Don’t be afraid, he told them, because “the most beautiful present is encountering Jesus.”

The evening before, Pope Francis continued the papal tradition of celebrating vespers on the vigil of the first Sunday of Advent with students and professors from universities in Rome.

He urged young people to not be swayed by public opinion, but to go against the tide by remaining faithful to their Christian values.

“Don’t watch life go by from the balcony,” he also said, but be where the challenges of the modern day world are. “Whoever doesn’t respond to challenges are not living,” he said, pinpointing the problems of development, human dignity, poverty and life.

NEXT: In conversations with parishioners, pope reveals he once was a bouncer