In conversations with parishioners, pope reveals he once was a bouncer 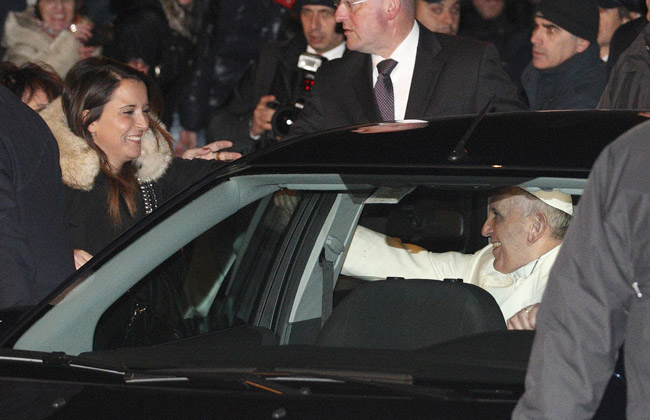 Pope Francis greets people from his Ford Focus as he leaves after celebrating Mass at the Parish of San Cirillo Alessandrino in Rome Dec. 2. (CNS photo/Paul Haring)

VATICAN CITY (CNS) — In addition to having worked sweeping floors and running tests in a chemical laboratory as a teenager, Pope Francis revealed he also used to work as a bouncer.

No longer kicking troublemakers out of clubs, he has discovered the secret to bringing people back, this time, into the church, according to the Vatican newspaper, L’Osservatore Romano, Dec. 2.

The pope spent four hours at a parish visit of the church of San Cirillo Alessandrino in a working-class neighborhood on the outskirts of Rome Dec. 1. He chatted informally with a large number of parishioners before and after celebrating Mass.

He told one group that when he was young, he worked as a bouncer, and that his work later in life, teaching literature and psychology, taught him how to get people back into the church.

He said it’s enough to be a witness of hope and, as St. Peter said, “always be ready to give an explanation to anyone who asks you for a reason for your hope.”

Recounting how he discovered his vocation to the priesthood after confession with a priest he had never met before, the pope joked it was common knowledge that the best confessors are priests the penitent does not know and priests who are deaf.

“Hypocrisy is a grave sin,” he said, underlining how important credibility was in helping the church grow, not through proselytism, but by attraction.

He also confided that he prayed “for the grace of simplicity for me and the church” when he prayed at the tomb of his namesake, St. Francis of Assisi, Oct. 4.

A woman asked the pope how she should pray for one of her relatives who was going to become a Franciscan friar.

The pope said to pray that the man would have “the perseverance to go forward, but also the courage to turn back if he understands that this is not the right path.”

Before celebrating Mass, he met with parents whose newborns were baptized within the last year, and he urged them to be patient with their children.

“When we baptize them, we bring home not just our child but also a seed of divinity that we have to help grow,” he said, according to the Vatican newspaper.

“Patience with children is beautiful just as it’s beautiful to talk with them and teach” them the things that matter in life, he said. But even more beautiful is remembering baptism brings “a sign of the divine” back to the home.

When meeting with children preparing for their confirmation, the kids presented the pope with a paper daisy. They asked him to pluck each heart-shaped petal to reveal a question the children had prepared.

Parish youngsters preparing for their confirmation presented Pope Francis with a paper daisy. They asked him to pluck each heart-shaped petal to reveal a question they had prepared.

The first question was whether he expected to be chosen as the cardinals’ “favorite” in the conclave that elected him pope.

Pope Francis said, “For the Lord, the ‘favorites’ are children.” But he added that he never dreamed that he would become the successor of Peter, not when he was ordained a priest and not even when he arrived for the conclave.

The next question was how the pope spent his day. “I pray, then I celebrate Mass, and then I start work,” which includes reading letters, cards, documents and reports as well as meeting cardinals, bishops, priests and laypeople, he told them.

He said he eats lunch between noon and 1 p.m., then rests for about 30 minutes before returning to work until the evening.

In answer to another question, he admitted feeling a bit of stage fright as pope and that he felt a little nervous celebrating his first Mass after being elected pontiff.

“Was I anxious? A little, yes, but everyone was nice. But it’s true, having a lot of people in front of you is a bit scary.”

But now, “Thank God I feel really good. The Lord helped me be a priest, to be a bishop and now to be the pope.”

Pope Francis also gave a bit of advice, saying it was important to be nice and good and to be a good example for others.

When asked how to manage that, the pope said “pray all the time, don’t speak badly of others because gossip destroys friendships, and always greet people nicely, always with a smile,” he said.

Sometimes even priests can be irritable so they need to work extra hard at being “meek, amiable and good.” That is why it is so important people “pray a lot for priests,” he added.