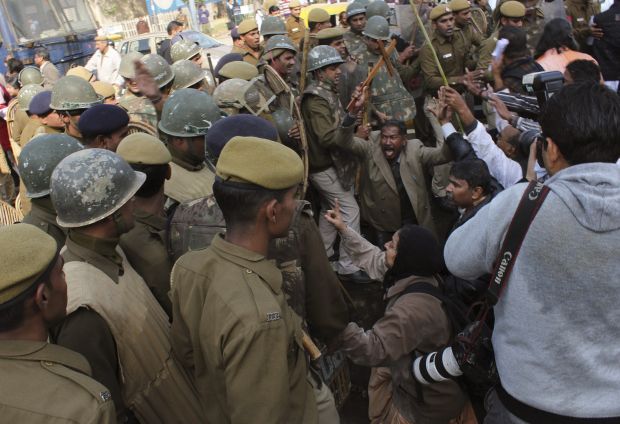 NEW DELHI (CNS) — Indian Prime Minister Manmohan Singh apologized to church leaders for the police beating of protesters — including priests and nuns — during a march to Parliament advocating for rights for low-caste Christians.

Singh apologized Dec. 12 when a 10-member delegation, led by Delhi Archbishop Anil Couto, called on him to press for the Christian demand for end to discrimination against Christian dalits, or members of the low castes.

Archbishop Couto was among six Catholic bishops and about a dozen of different denominations detained with 400 protesters during the march the previous day. Hundreds of the protesters from across India broke through police barricades and marched to Parliament shouting “We want justice.”

“Dalit,” which means “trampled upon” in Sanskrit, refers to people treated as untouchables under the caste system in India. In 1950 the Indian government established a quota system in education and government jobs as a type of affirmative action for Hindu dalits.

Though these statutory privileges were later extended to Sikh dalits in 1956 and Buddhist dalits in 1990, the repeated requests of the Christian dalits — who account for two-thirds of 27 million Christians in India — have gone unanswered.

During the Dec. 11 march, police with batons charged and beat up several protesters. Undeterred, the protesters, including Catholic priests in cassocks, knelt on the road with crosses in hand, and a police truck mounted with water cannons sprayed them with muddy water several times.

When the protesters would not move, police arrested more than 400 of them, including all the bishops, who remained in the police station for five hours until the prime minister’s office confirmed an audience for the delegation to present a memorandum on behalf of the dalits.

“We are not going to tolerate this injustice (to the dalits) any longer, said Father Devasagayraj Zakarias, secretary of the Dalit Commission of the Catholic Bishops’ Conference of India. “We have made our stand clear, and the prime minister has promised to try to build consensus on our demand.”

The priest said Catholic leaders were happy that the prime minister apologized.

“Even nuns were beaten up,” said the dalit priest, who had his cassock muddied by spray from the water cannons.

PREVIOUS: Hush up before Christmas, pope says, because God speaks in whispers

NEXT: ‘Jesus the Homeless’ sculpture may find home in Rome