‘Jesus the Homeless’ sculpture may find home in Rome 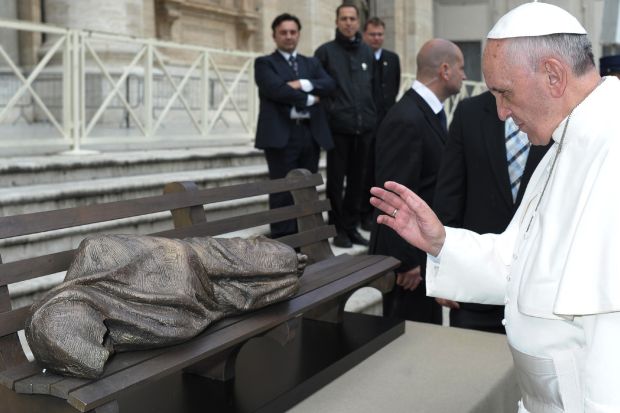 Pope Francis blesses the sculpture "Jesus the Homeless" during his general audience in St. Peter's Square at the Vatican Nov. 20. (CNS photo/L'Osservatore Romano)

VATICAN CITY (CNS) — A year ago, Timothy Schmalz’s bronze sculpture “Jesus the Homeless” had been rejected by St. Patrick’s Cathedral in New York and St. Michael’s Cathedral in Toronto.

But in late November, Pope Francis blessed the sculpture at one of his weekly general audiences in front of thousands of eager pilgrims. The pontiff touched the knee of the sculpture and prayed for a few moments. Afterward, he told Schmalz he thought the sculpture was a “beautiful piece of art.”

When Schmalz saw Pope Francis touch the sculpture, he said, “I thought well that’s just it, this sculpture is symbolically representing what he’s doing. He’s out there touching the homeless people; he’s reaching out to them every single day.”

Appropriately, “Jesus the Homeless” may have found a permanent home in Rome, very close to the Vatican. The plan is for the sculpture to be placed close to the Vatican Radio offices near the Tiber River in memory of a homeless woman who slept there every night before dying outside in the cold.

Schmalz grew up outside of Toronto, and his interest in producing religious sculptures was born when he became “disenchanted” by the abstract artwork he saw being produced at Ontario College of Art, where he studied for several years.

After undergoing a religious conversion, the artist realized he wanted to produce artwork that would “contribute to the world.” Inspired by the work of great religious sculptors like Michelangelo and Bernini, the sculptor opened his own studio and began producing his own religious artwork. Schmalz says that Christian artwork has provided him with an “endless well” for creativity.

In 2011, inspired by a section of Matthew 25, the artist began working on “Jesus the Homeless,” which is perhaps his most famous work. The bronze sculpture depicts a weary Jesus wrapped in a blanket, face covered. With only the feet exposed, Schmalz says viewers are forced to take a second look at the sculpture, realizing after a few minutes that the sculpture is Jesus.

“I can imagine some people walking on a city street, walking by thinking it’s another homeless person, and then they’ll realize it’s actually a representation of Jesus. They will have that moment of reflection.”

A true believer that art has the ability to change people’s lives, Schmalz says, “you see the most beautiful buildings, and then you look down and you see the most marginalized humans. It’s not that we don’t have money in our society, we just do not have awareness or connection, and I think that art can become that bridge.”