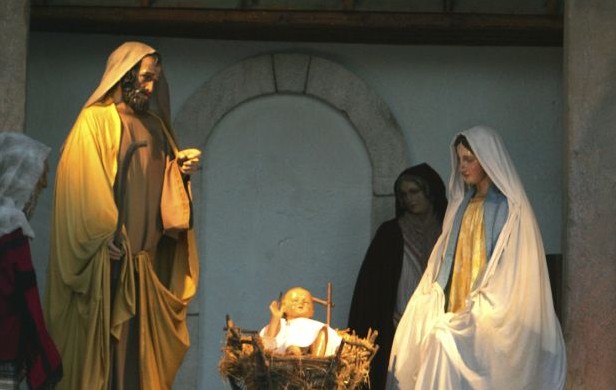 Joseph, Mary and the Christ Child are depicted in the 2007 Nativity scene in St. Peter's Square at the Vatican Dec. 28. (CNS photo/Alessia Giualiani, Catholic Press Photo)

VATICAN CITY (CNS) — The world famous Nativity scenes of Naples never follow just the biblical account of Jesus’ birth; for one thing, the figures usually are dressed in 18th-century costumes, but also it’s not unusual for a modern-day politician or even pope to enter the scene.

The Christmas creche donated to the Vatican by the Archdiocese of Naples does not have Pope Francis or any politicians in it, but Msgr. Adolfo Russo, the archdiocesan vicar for culture, said the figures of musicians, the poor, the rich, the young and the old are all meant to illustrate “the permanent coming of the Lord into history.”

“Jesus is always coming into the world, into a specific social context,” the monsignor told Catholic News Service Dec. 23 just after meeting Pope Francis with Cardinal Crescenzio Sepe of Naples and the artists who created the Nativity scene.

The public unveiling of the scene was scheduled for late afternoon Dec. 24, but the cardinal and the artists gave a preview to reporters, accompanying them behind the burlap fence hiding it from public view.

Cardinal Sepe said the scene with its life-sized figures — whose heads, hands and feet are made of terra cotta — would be donated to the Vatican Museums after Christmas.

The cardinal said his favorite part of the scene is the poor mother who brings her son to see the Baby Jesus. The mother and son are symbols for all the poor and simple people who find hope and salvation “in the Lord who is newly born,” he said.

The figures are the work of the imagination and hands of artist Antonio Cantone, who said the figure he has the most affection for is described only as “The Beggar.” Roughly dressed and dirty, he’s sitting at the feet of the Baby Jesus’ manger.

“It’s no accident that we have him sitting closest to the baby,” Cantone said. “It’s an image of how the poor are closest to God.”

“He has nothing,” Cantone said. “If you notice, we’ve put the Three Kings’ gifts farther away. The beggar brings only himself.”

The scene has Jesus, Mary and Joseph and 14 other figures, including the three Wise Men. One of the others is the “Zampognaro,” who plays a rustic form of bagpipe. Msgr. Russo said the musician is a key part of a Neapolitan Nativity because “he brings music, a note of joy. The coming of Jesus is always the cause of joy.”

Sixteen busts of angels are scattered above the manger and at its feet. Cantone said it was not possible to hang 16 full-bodied angels, so he went with the heads and wings.

PREVIOUS: Remember those like Holy Family who are homeless, pope says