Remember those like Holy Family who are homeless, pope says 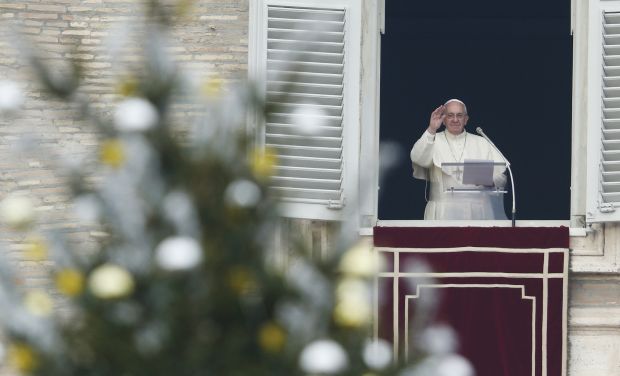 The Christmas tree is seen as Pope Francis greets the crowd as he leads the Angelus from the window of his studio overlooking St. Peter's Square at the Vatican Dec. 22. (CNS photo/Paul Haring)

VATICAN CITY (CNS) — Seeing a protest sign in St. Peter’s Square that read “The poor cannot wait,” Pope Francis urged individuals and government leaders to recognize the pain, struggles and rights of families — like Jesus, Mary and Joseph — who do not have a home.

Pope Francis read the sign out loud Dec. 22 after reciting the midday Angelus prayer from the window of the apostolic palace.

“It’s beautiful,” he said. “It makes me think how Jesus was born in a stall, not a house. And reading that sign I think today of all the families without homes, either because they never had one or because they lost their home for some reason.

“A family and a home go together,” the pope said. “It’s very difficult to keep a family going without a home to live in. During these Christmas days, I ask everyone — individuals, social agencies, authorities — to do everything possible so that every family can have a home.”

The sign was carried by members of a loose coalition of protesters who had been demonstrating across Italy since early December. Known as the “pitchfork movement,” it included farmers, truckers and families protesting taxes and government austerity programs.

Pope Francis praised social involvement, but he insisted that citizens must resist the temptation of violence and defend their rights through dialogue.

In his main Angelus address, Pope Francis focused on the Gospel’s description of Joseph finding out that Mary was expecting a child and facing a struggle between his love for her and his obedience to God’s law, which prescribed shunning her because they were not married.

“This brief phrase describes a real and true interior drama, if we consider how much Joseph loved Mary,” the pope said, adding that it must have been like the internal struggle of Abraham when God told him to sacrifice his only son Isaac.

“But, as he did with Abraham, the Lord intervenes; he found the faith he was looking for and opens a different path, a path of love and happiness,” the pope said.

Pope Francis prayed that Christians would learn to entrust themselves fully to God like Mary did and that, like Joseph, they would “prefer to believe the Lord rather than listening to the voices of doubt and human pride.”