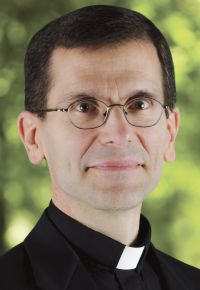 Pope Francis accepted the resignations of Bishops Latino and Pfeifer. Canon law requires bishops to turn in their resignation to the pope when they turn 75.

The changes were announced in Washington Dec. 12 by Archbishop Carlo Maria Vigano, apostolic nuncio to the United States.

Bishop-designate Kopacz will be ordained and installed at a Feb. 6 Mass at the Cathedral of St. Peter the Apostle in Jackson.

Bishop-designate Sis will be ordained and installed at a Jan. 27 Mass at the McNease Convention Center in San Angelo.

Bishop Latino, who will serve as diocesan administrator in Jackson until his successor’s installation, asked Catholics of the diocese to keep the newly named bishop in their prayers and to offer him “a warm Mississippi welcome” when he begins “his many responsibilities as shepherd of the Diocese of Jackson.”

He added: “This is indeed a joyful day.”

A native of New Orleans, the retired bishop had headed the Jackson Diocese since March 2003. Ordained a priest for the New Orleans Archdiocese in 1963, he held educational, parish and administrative posts in the archdiocese and in the Diocese of Houma-Thibodaux, La., after it was formed in 1977. He was vicar general for Houma-Thibodaux when Blessed John Paul II named him the 10th bishop of Jackson.

Scranton Bishop Joseph C. Bambera said in a statement the appointment of Bishop-designate Kopacz was “cause for great joy” in his home diocese. Pope Francis has recognized the priest’s “many gifts and deep faith,” he said.

While Holy Trinity parishioners and many others in the Scranton Diocese “will undoubtedly feel a certain sadness in losing the presence of a such a dedicated pastor and friend,” Bishop Bambera said, “we give thanks to God that he has chosen Father Kopacz to serve the broader church and particularly our brothers and sisters” in Jackson.

A native of Dunmore, Pa., Bishop-designate Kopacz has a bachelor’s degree in history from the University of Scranton, a master’s in Latin from Fordham University in New York, and a master’s in theology from Christ the King Seminary in the Diocese of Buffalo, N.Y. He also earned a master’s in counseling and psychology and a doctorate in human development from Marywood University in Scranton.

He was ordained for the Scranton Diocese in 1977 and had several assignments as assistant pastor, parish administrator and pastor.

From 1998 to 2002 he was diocesan vicar for priests and formation director at St. Pius X Seminary in Dalton, Pa., then was appointed pastor of Sacred Hearts of Jesus and Mary in Scranton. In 2005 he was named vicar general for the diocese, while still vicar for priests and Sacred Hearts pastor. In July 2006 he became pastor of St. Mary of the Mount in Mount Pocono; he was vicar general until August 2009. St. Mary was consolidated with two other parishes to form Holy Trinity, his current parish.

Other diocesan positions he has held include as president of the Catholic Schools’ Board of Education, a member of the diocesan finance council, director of continuing education for priests and a coordinator of Hispanic ministry for Monroe County.

The Jackson Diocese is comprised of 65 counties, covering about 38,000 square miles. It is home to close to 48,000 Catholics, out of a total population of 2.1 million people. It has 75 parishes and 24 missions.

Since his ordination for the Austin Diocese in 1986, he has served in a variety of roles. He has been associate pastor and pastor at several parishes. From 1990-1992 he was an associate pastor in campus ministry at St. Mary’s Student Center in College Station, Texas, which is home to Texas A&M University.

From 1993 to 2006, he was pastor of St. Mary’s Student Center. In 2006, he began a three-year stint as vocation director for the diocese. In 2010, Austin Bishop Joe S. Vasquez named him vicar general and moderator of the curia.

At a news conference in San Angelo, Bishop-designate Sis called his appointment “a joy and an honor and an undeserved privilege.”

He asked for prayers from Catholics of the diocese as their new shepherd. “I want to learn your hopes, your dreams, your struggles and fears,” he said.

The new bishop made some remarks in Spanish, saying, “The church belongs to all.”

Bishop Pfeifer told him: “We welcome you. We open our hearts to you, and our hands.”

Bishop Pfeifer has been San Angelo’s bishop since he was ordained and installed to head the diocese July 26, 1985. Born in Alamo, Texas, he was ordained a Missionary Oblate of Mary Immaculate in 1964. He served various assignments, including many years as a missionary in Mexico.

He was elected provincial of his order’s Southern province, and while in that position, Blessed John Paul II named him fifth bishop of San Angelo May 31, 1985.

The San Angelo Diocese covers more than 37,000 square miles spread across 29 counties in central and west Texas. Catholics number 77,000 out of a total population of about 860,000. The diocese has 47 parishes and 22 missions.

PREVIOUS: Pope: Human trafficking is crime against humanity, must be stopped

NEXT: Pope says peace is impossible without fraternity based on Christ