Pope says peace is impossible without fraternity based on Christ 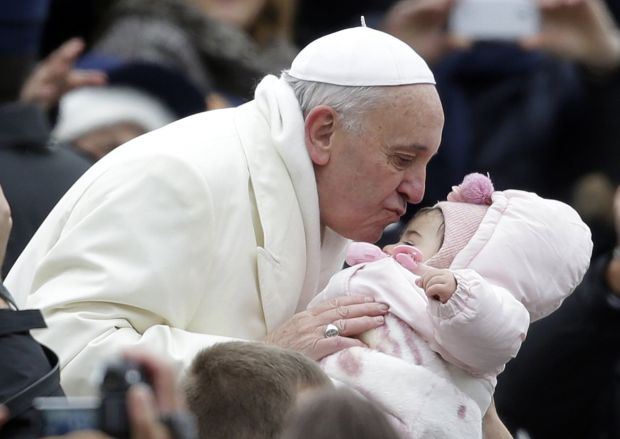 Pope Francis kisses a baby as he arrives for his weekly audience in St. Peter's Square at the Vatican Nov. 27. (CNS photo/Max Rossi, Reuters)

VATICAN CITY (CNS) — In his first annual message for the World Day of Peace, Pope Francis writes that peace and social justice are impossible without a spirit of fraternity based on recognition that all men and women are children of God — a relationship fulfilled in the death and resurrection of Jesus Christ.

The nearly 5,000-word message, entitled “Fraternity, the Foundation and Pathway to Peace,” was released by the Vatican Dec. 12 in preparation for the World Day of Peace Jan. 1.

“Without fraternity it is impossible to build a just society and a solid and lasting peace,” the pope writes. “At the same time, it appears clear that contemporary ethical systems remain incapable of producing authentic bonds of fraternity, since a fraternity devoid of reference to a common Father as its ultimate foundation is unable to endure. True brotherhood among peoples presupposes and demands a transcendent Fatherhood.”

The pope adds that, “in a particular way, human fraternity is regenerated in and by Jesus Christ through his death and resurrection. The cross is the definitive foundational locus of that fraternity which human beings are not capable of generating themselves.”

He decries a widespread “poverty of relationships as a result of the lack of solid family and community relationships,” and writes that “fraternity is generally first learned in the family, thanks above all to the responsible and complementary roles of each of its members, particularly the father and the mother.”

With regard to economic justice, the pope calls for “effective policies” to reduce income inequality and guarantee “access to capital and services, educational resources, healthcare and technology so that every person has the opportunity to express and realize his or her life project and can develop fully as a person.”

He also calls on ordinary Christians to embrace a “sober and essential lifestyle” and share their wealth, calling such practice of “detachment” a “form of promoting fraternity — and thus defeating poverty — which must be the basis of all the others.”

The current economic crisis, Pope Francis writes, offers a “fruitful opportunity to rediscover the virtues of prudence, temperance, justice and strength” that are “necessary for building and preserving a society in accord with human dignity.”

He repeats his own calls and those of previous popes for the “nonproliferation of arms and for the disarmament of all parties, beginning with nuclear and chemical weapons,” and appeals directly to “all those who sow violence and death by force of arms” to see every enemy instead as “your brother or sister, and hold back your hand!”

“Human beings can experience conversion,” the pope writes. “I wish this to be a message of hope and confidence for all, even for those who have committed brutal crimes, for God does not wish the death of the sinner, but that he converts and lives.”

Criminal organizations of all sizes “gravely offend God, they hurt others and they harm creation, all the more so when they have religious overtones,” the pope writes.

He deplores the “inhumane conditions in so many prisons, where those in custody are often reduced to a subhuman status in violation of their human dignity and stunted in their hope and desire for rehabilitation.”

Calling for responsible and equitable use of natural resources, Pope Francis focuses on agriculture. “It is well known that present (food) production is sufficient, and yet millions of persons continue to suffer and die from hunger, and this is a real scandal,” he writes.

Underscoring the critique of globalization that has become a major theme of his teaching as pope, he observes that the “ever-increasing number of interconnections and communications in today’s world makes us powerfully aware of the unity and common destiny of the nations.”

But this unity, he writes, is “still frequently denied and ignored in a world marked by a ‘globalization of indifference’ which makes us slowly inured to the suffering of others and closed in on ourselves.”

NEXT: Hush up before Christmas, pope says, because God speaks in whispers