Pope celebrates birthday by having breakfast with homeless men 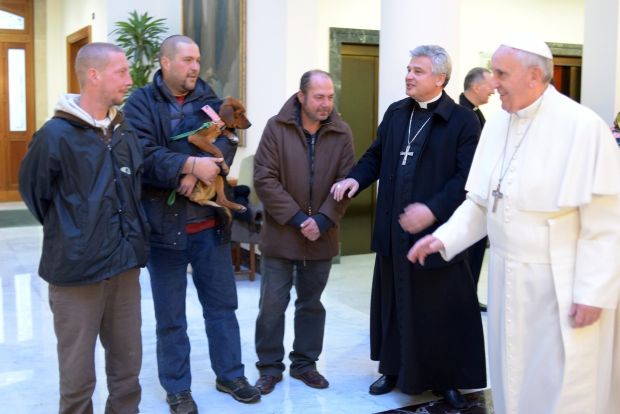 Pope Francis talks with three men Dec. 17 who live on the streets near the Vatican. (CNS photo/L'Osservatore Romano via Reuters)

Updated – VATICAN CITY (CNS) — As part of a low-key celebration of his 77th birthday, Pope Francis had breakfast with three people who live on the streets near the Vatican. A small dog, belonging to one of the homeless men, was also on the guest list.

The pope started the day with his usual morning Mass held in the chapel of the Domus Sanctae Marthae residence where he lives.

However, he requested that the Mass be attended by the residence staff “in order to create a particularly family atmosphere for the celebration,” the Vatican press office said in a written statement Dec. 17. Cardinal Angelo Sodano, dean of the College of Cardinals, represented the world’s cardinals at the Mass, and Archbishop Pietro Parolin, Vatican secretary of state, attended.

After the Mass, all those present sang “Happy Birthday” to the pope, the Vatican statement said. The pope then met with everyone, including three homeless men who were brought there by Archbishop Konrad Krajewski, the papal almoner.

The archbishop invited the first group of men he had found early that morning sleeping under the large portico in front of the Vatican press hall on the main boulevard in front of St. Peter’s Square, according to the Vatican newspaper, L’Osservatore Romano.

“Would you like to come Pope Francis’ birthday party,” he asked them, reported the paper.

The men, in their forties, were from Slovakia, Poland and the Czech Republic. They loaded all their belongings in the archbishop’s car; the dog rode in the middle.

When they got to the residence, they waited for the Mass to end, then greeted the pope. Together with Archbishop Krajewski, they gave the pope a bouquet of sunflowers, because they always turn toward the sun like the church turns toward its sun, Christ, the archbishop explained.

The pope invited the men to have breakfast with him in the residence dining room, where they talked and shared a few laughs.

One of the men told the pope, “It’s worthwhile being a vagrant because you get to meet the pope,” the paper said.

The pope was scheduled to carry out a normal workday, the Vatican said.

Some Vatican offices paid homage to the pope in different ways: the Vatican television center created a special video of visual highlights of Pope Francis’ nine-month-long pontificate; the Vatican internet office posted on the vatican.va website an e-album of images and quotes by the pope; the Vatican newspaper, L’Osservatore Romano, rolled out a newly designed website at www.osservatoreromano.va that lets readers easily share stories on social media.

A group representing the pope’s favorite soccer squad — San Lorenzo de Almagro — had wanted to celebrate the pope’s birthday by showing him the Argentine league championship trophy they won Dec. 16.

However, Passionist Father Ciro Benedettini, vice director of the Vatican press office, said it was expected the group would meet the pope Dec. 18.

A group of children receiving assistance from the Vatican’s St. Martha Dispensary, a maternal and pediatric clinic, had given the pope a surprise birthday party Dec. 14 marked with singing, a real cake with candles and a sweater as a gift.

When presented with the cake, the pope blew out the candles with the children and joked, “I’ll tell you later if it’s good or not.”

Pilgrims gathered for the Angelus prayer in St. Peter’s Square Dec. 15 also sang “Happy Birthday” as they waited for the pope to appear at the window of the apostolic palace.

NEXT: Pope proclaims sainthood of Jesuit companion of St. Ignatius