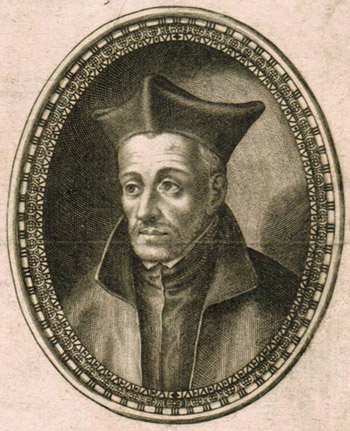 St. Peter Faber, who lived during the 16th century, is seen in an undated illustration. (CNS photo/courtesy of Jesuit General Curia)

The decree is what the Vatican terms an “equivalent canonization,” in which the pope inserts the name of the new saint in the universal calendar of saints without verifying a miracle performed through his intercession and without holding a formal canonization ceremony.

The Vatican announced Dec. 17 that the pope formalized the church’s recognition of the 16th-century priest, who with St. Ignatius of Loyola and St. Francis Xavier, was a founding member of the Society of Jesus, by “inscribing him in the catalog of saints.”

The same day, the pope advanced the sainthood cause of Sister Miriam Teresa Demjanovich, a member of the Sisters of Charity of St. Elizabeth in Convent Station, N.J., who died in 1927. By recognizing a miracle attributed to her intercession, the pope clears the way for the beatification ceremony to be held.

Sister Demjanovich was born in Bayonne, N.J., in 1901. After attending Bayonne public schools, she began studies at the College of St. Elizabeth in Convent Station, graduating in 1923. Two years later, she entered the Sisters of Charity at Convent Station. She wrote a series of spiritual conferences, which were collected and published after her death as a book, “Greater Perfection.” She died in 1927 at the age of 26. She was declared venerable by the Vatican in May 2012.

Welcoming the news of St. Faber’s canonization, a statement from the Jesuit headquarters in Rome said the canonization was significant because it highlights a man who “is a model of the spirituality and priestly life of the current pontiff and at the same time is one of the important references for understanding his style of governance.”

St. Faber, who was born in 1506 in what is now France, shared lodgings with Ignatius and Francis Xavier at the College of St. Barbara at the University of Paris. Faber actually was the first of the Jesuits to be ordained a priest and he celebrated the Mass in 1534 during which St. Ignatius and the others took their vows of poverty, chastity and obedience.

Jesuit Father Marc Lindeijer, vice postulator or promoter of Jesuit sainthood causes, told Catholic News Service Nov. 27 that “more or less right after his election” in March, Pope Francis asked that the process be started for the canonization of St. Faber.

While according to church law Pope Francis could have signed a decree immediately, Father Lindeijer said the pope asked that the cause “be studied and evaluated on its merits.”

The “equivalent canonizations” — used most recently for St. Angela of Foligno and St. Hildegard of Bingen — recognize the candidates’ widespread fame of holiness and veneration by Catholic faithful sustained over centuries.

For modern Jesuits, Father Lindeijer said, the canonization would be another step forward in recognizing that the Society of Jesus was founded by a group of companions and not only by St. Ignatius.

Jesuit Father Antonio Spadaro, editor of La Civilta Cattolica, who conducted the interview with Pope Francis published in Jesuit periodicals in September, had asked Pope Francis about his favorite Jesuits.

Pope Francis began “by mentioning Ignatius Loyola and Francis Xavier, but then focuses on a figure that other Jesuits certainly know, but who is of course not as well known to the general public: Peter Faber (1506-46),” Father Spadaro wrote.

Asked what he admired about Faber, the pope replied, his “dialogue with all, even the most remote and even with his opponents; his simple piety, a certain naivete, perhaps, his being available straightaway, his careful interior discernment, the fact that he was a man capable of great and strong decisions but also capable of being so gentle and loving.”

Pope Francis also recognized the heroic virtues of Father Manuel Herranz Estables — the 20th-century Spanish founder of the Handmaids of Our Lady of Sorrows, and Jerzy Ciesielski — a Polish husband and father who died in Egypt in 1970. Pope Francis declared them venerable; a miracle attributed to their intercession still is needed before they can be beatified. In general, a second such miracle is needed for canonization.

PREVIOUS: Pope celebrates birthday by having breakfast with homeless men