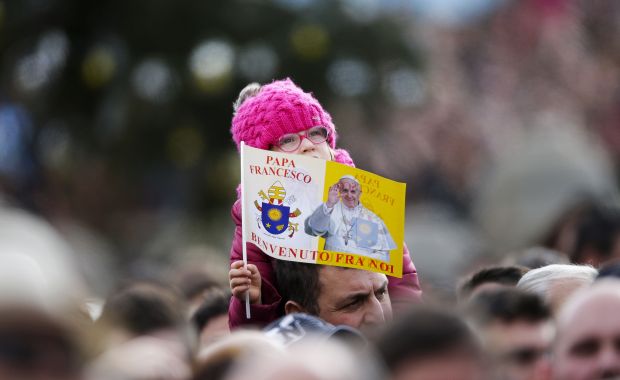 A child holds a flag with an image of Pope Francis as he leads the Angelus from the window of his studio overlooking St. Peter's Square at the Vatican Dec. 29, the feast of the Holy Family. (CNS photo/Max Rossi, Reuters)

VATICAN CITY (CNS) — Just as people must never ignore the plight of today’s immigrants and refugees, they must also remember today’s “hidden exiles” — the elderly and other relatives who are abandoned or forgotten by their own families, Pope Francis said.

“One sign for knowing how a family is doing is to see how they treat children and their elderly” relatives, the pope said at his noon blessing at the Vatican Dec. 29, the feast of the Holy Family.

Remembering how Jesus, Mary and Joseph had to live in exile, seeking escape in Egypt, Christians must also think about the tragedy of “migrants and refugees who are victims of rejection and exploitation, who are victims of human trafficking and slave labor,” he said before praying the Angelus with visitors gathered in St. Peter’s Square.

“But let us also think about the other ‘exiled,’ I would call them the ‘hidden exiles,’ those exiled by their own family: the elderly, for example, who sometimes are treated as a burden,” he said.

The pope said today’s families should be inspired by the Holy Family’s simplicity and way of life, so they, too, can become “communities of love and reconciliation where one experiences tenderness, helping one another and mutual forgiveness.”

God wanted to be born in a human family and “wanted to have a mother and father, like we” have, the pope said.

Jesus also wanted to belong to a family that had to go through many hardships “so that no one would feel excluded from God’s loving closeness.”

The Holy Family’s forced exile shows that “God is where people are in danger, where they suffer, where they flee, where they experience rejection and abandonment,” he said.

But God is also where there is hope — hope in returning to one’s homeland, in being free and being able to build a life of dignity for oneself and one’s family, he said.

The pope reminded people that the key phrases for cultivating peace and joy in one’s family are “May I; thank you; and I’m sorry,” so that everyone treats each other with respect and generosity.

Families must also recognize how important they are for the church and society, he said.

“The proclamation of the Gospel, in fact, is promoted above all by families so that it then reaches the different areas of daily life.”

After the Angelus, the pope underlined how the family will take center stage during the next consistory or consultation with the College of Cardinals in February and at an October Synod of Bishops, whose work, he said, he was entrusting to Jesus, Mary and Joseph.

The pope created a special prayer for the world’s families, which he recited to the crowd gathered in the square.

The prayer, dedicated to the Holy Family, asks for their intercession to help today’s families be places of love, prayer and healing; be free from violence and division; and be mindful of the sacredness and beauty of the traditional family.