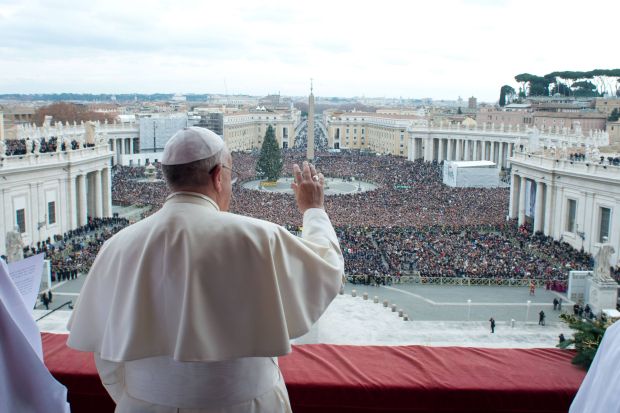 Pope Francis waves as he delivers his Christmas blessing "urbi et orbi" (to the city and the world) from the central balcony of St. Peter's Basilica at the Vatican Dec. 25. (CNS photo/L'Osservatore Romano via Reuters)

VATICAN CITY (CNS) — After a year that included the historic resignation of Pope Benedict XVI and a series of celebrated innovations by Pope Francis, it is hard to imagine 2014 at the Vatican could be nearly as eventful. Of course, the biggest stories are likely to be those that come by surprise, but in the meantime, here are developments bound to loom large in Vatican news over the coming year:

— New Cardinals: Pope Francis is scheduled to create new cardinals Feb. 22. By that time, no more than 106 members of the College of Cardinals will be under the age of 80 and thus eligible to vote in a conclave to elect a new pope. Under rules established by Pope Paul VI, the college should not have more than 120 such members, though subsequent popes have occasionally exceeded that number. So Pope Francis can be expected to name at least 14 new cardinal electors.

The election of the first Latin American pope has raised expectations of greater geographical diversity among cardinal electors, so the new slate might prove relatively heavy on names from statistically underrepresented regions, especially Latin America and Africa.

— Vatican reform: The eight-member Council of Cardinals that Pope Francis formed to advise him on governance of the universal church and reform of the Vatican bureaucracy has already joined him for two rounds of meetings at the Vatican and will do so again in February. The body is working on the first major overhaul of the Roman Curia, the church’s central administration at the Vatican, since 1988.

Although the council has not announced a timeline for its work, Pope Francis has established a record of acting fast; in December, he approved an idea for an international commission on the sexual abuse of children just one day after the council proposed it. So few will be surprised if the council gives him a draft of an apostolic constitution reorganizing the curia before the end of 2014.

— Canonization of two popes: The double canonization ceremony of Blessed John XXIII and Blessed John Paul II, scheduled for April 27, is almost certain to draw crowds larger than the more than 1 million who attended the latter’s beatification in May 2011.

By choosing to declare the sanctity of both men on the same day, Pope Francis may be trying to emphasize fundamental continuities between two popes widely seen as respectively liberal and conservative, especially with regard to reforms ushered in by the Second Vatican Council. Blessed John opened the council in 1962, and Blessed John Paul attended all four sessions as a bishop. The ceremony could thus serve as an occasion for Pope Francis to expound on his own understanding of Vatican II and its legacy for the church.

— Papal trip to the Holy Land: The Vatican has yet to announce dates or an itinerary for an expected papal visit to the Holy Land but has not denied recent reports that it will take place in late May and last three days, with stops in Israel, Jordan and the Palestinian territories. Pope Francis has said a Holy Land visit would include a meeting with Ecumenical Patriarch Bartholomew of Constantinople, considered first among equals by Orthodox bishops.

The trip would be Pope Francis’ second outside of Italy, following his visit to Brazil in July 2013, and the first planned during his pontificate. The destination would be fitting for a pope whose relations with Jews have been exceptionally warm and who has made peace in the Middle East a priority of his geopolitical agenda. While a three-day papal visit would be unusually brief for such a prominent destination, it would be appropriate for Pope Francis, who has a heavy agenda of reform at home and the media flair to reach the world without leaving the Vatican.

— Divorced and remarried Catholics: An extraordinary session of the Synod of Bishops will meet at the Vatican for two weeks in October to discuss the “pastoral challenges of the family in the context of evangelization.”

Pope Francis has indicated topics of discussion at the synod will include church law governing marriage annulments and the eligibility of divorced and remarried Catholics to receive Communion — problems he has said exemplify a general need for mercy in the church today.

In addition to speculation about possible changes in church practice in those areas, the synod has drawn attention with a preparatory questionnaire sent to the world’s bishops, which asks about the promotion and acceptance of Catholic teachings on such controversial topics as premarital cohabitation, same-sex unions and contraception.

NEXT: Pope: Don’t forget plight of exiles, elderly marginalized by own family