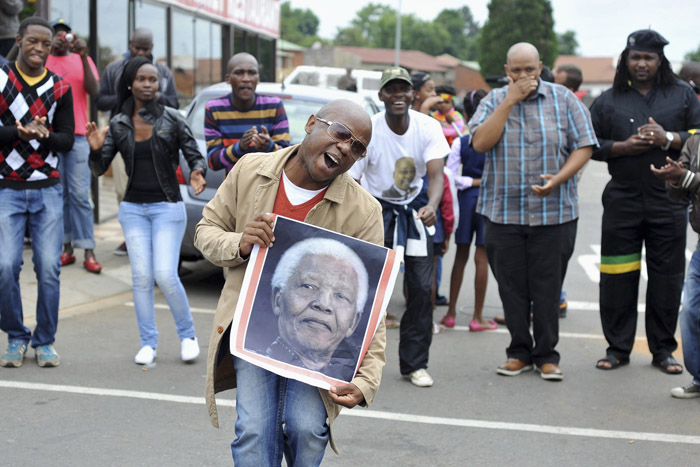 People sing and dance during a Dec. 6 gathering of mourners in Soweto, where former South African President Nelson Mandela once resided. Mandela, who led the struggle to replace the country's apartheid regime with a multiracial democracy, died Dec. 5 at age 95 at his home in Johannesburg. (CNS photo/Ihsaan Haffejee, Reuters) 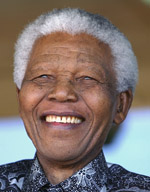 Mandela, 95, became the country’s first black president in 1994. He was awarded the Nobel Peace Prize in 1993.

One of the world’s most revered statesmen, Mandela had a touch of humanity rarely seen in political leaders, said Cardinal Wilfrid Napier of Durban, South Africa in an interview with Catholic News Service earlier this year.

Cardinal Napier represented the South African Catholic Church in discussions between Mandela and church leaders beginning in 1990, following Mandela’s release after 27 years in prison, until he retired from public life in 2004.

Cardinal Napier said he came to treasure Mandela through regular meetings church leaders had with his African National Congress in the transition from apartheid to democracy.

“I always felt we should introduce ourselves to him again, but it was never necessary,” said the cardinal, who was president of the Southern African Catholic Bishops’ Conference from 1987 to 1994.

Mandela “remembered names and faces and always gave us a hearty welcome,” he said.

“I came to realize that if he had met someone he had no trouble remembering their names or where they were from. To him, people mattered because of who they were, not the position they held,” he said. “That’s what I really treasure about the man.”

Negotiations between Mandela and South Africa’s apartheid regime began in 1989 while he was still imprisoned. The late Archbishop Denis Hurley of Durban told Catholic News Service at the time that he was “astonished” to hear that the notoriously intransigent former President P.W. Botha had approached Mandela to discuss negotiating an end to the armed struggle against apartheid.

The negotiations were fraught with difficulties, and Mandela frequently called on the country’s church leaders to help overcome the deadlocks, Cardinal Napier said.

“When there was a problem, Mandela would say exactly how he saw the problem,” he said, noting that the South African leader was a “direct man and it was easy to engage with him.”

Mandela’s humility and self-deprecating sense of humor were other qualities Cardinal Napier said he valued. 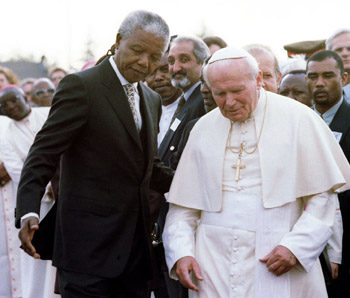 In February 2001, when Cardinal Napier was inducted into the College of Cardinals by Pope John Paul II, Mandela was in Mozambique.

“He tracked me down to St. Peter’s to congratulate me. He said, ‘Archbishop Napier, how wonderful that you’ve been promoted to this esteemed position and you still have time for all of us back home.’ I called him Mr. Mandela and he said, ‘No, it’s Madiba.’ He wished me luck and asked me to pass on his greetings to everyone there.”

Mandela, who was born in 1918 into the Xhosa-speaking Thembu people in a village in South Africa’s Eastern Cape province, was often called by his clan name ‘Madiba.’

Cardinal Napier recalled a 1991 meeting at retired Anglican Archbishop Desmond Tutu’s Cape Town office, where church leaders and liberation movement leaders were introducing themselves to each other.

“I could see Mandela quite clearly from where I was seated, and when the Methodist bishop’s turn came to introduce himself Mandela said, “That’s my bishop.’ He’s the only political leader I’ve known who’s … allowed himself to be defined in terms of his faith, not just in terms of political allegiance,” the cardinal said.

After serving one term in office, Mandela became a high-profile ambassador for South Africa and helped with peace negotiations in other African countries.

Mandela was diagnosed with prostate cancer in 2001 and, three years later, at the age of 85, retired from public life. He made rare public appearances after that, but helped to secure South Africa’s right to host the 2010 FIFA World Cup soccer tournament.

On his 80th birthday, he married Graca Machel, the widow of the former president of Mozambique.

After his official retirement, his public appearances were primarily connected with the work of the Mandela Foundation, a charitable fund he founded.

On July 18, 2007, his 89th birthday, Mandela formed The Elders, a council that aims to tackle global problems.

In honor of Mandela’s birthday in 2011, U.S. President Barack Obama called the South African leader “a beacon for the global community and for all who work for democracy, justice and reconciliation.”

Every July 18, people around the world take up Mandela’s call for citizens to “take responsibility to change the world into a better place” by donating 67 minutes of their time — one minute for each year of Mandela’s struggle against white-minority rule — to helping others.

The parishioners of Regina Mundi Church in Soweto are among thousands of South Africans who have heeded the call, said Oblate Father Benedict Mahlangu, a priest at the parish.

On July 18, 2011, members of the Catholic Women’s League were at the church at 6 a.m. to prepare a special meal for unemployed and homeless people in and around Soweto, Father Mahlangu said, recalling that Mandela came to a service at the church to celebrate his birthday in 2010.

The church, the largest in Soweto, served as a refuge for anti-apartheid activists for decades. Bullet holes in the ceiling and the broken marble altar have been preserved and serve as reminders of the apartheid era.

PREVIOUS: Pope to set up advisory commission on sexual abuse

NEXT: Pope calls for action against hunger in a world of plenty