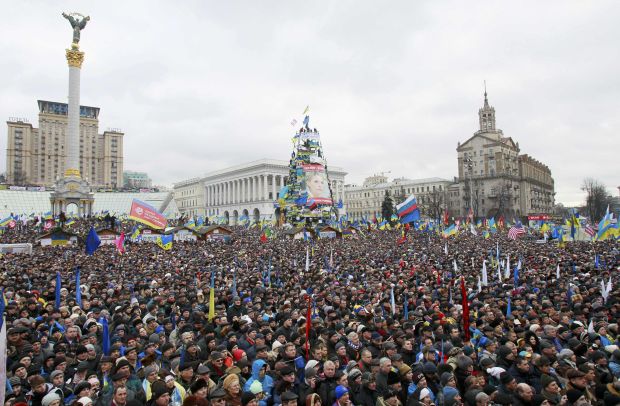 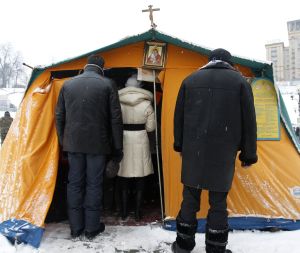 ROME (CNS) — When Ukrainian Catholic Bishop Borys Gudziak addressed the crowds in Kiev’s Independence Square Dec. 8, he focused on the youth and told them they could change the country.

Bishop Gudziak was not the only prelate at the large Dec. 8 demonstration. Retired Cardinal Lubomyr Husar, the 80-year-old former head of the Ukrainian Catholic Church, spoke from the main stage early in the morning. The protest area includes a tent chapel where liturgy is celebrated, Bishop Gudziak said, and Catholic, Orthodox and Protestant clergy have been assisting the demonstrators.

“It’s very much a spiritual movement, a movement of hearts and values,” Bishop Gudziak told Catholic News Service Dec. 9. Speaking by telephone from Kiev, he said the protesters want “a country where corruption doesn’t reign, where a mother doesn’t have to pay a bribe to get a doctor for her child, where students don’t have to pay bribes to get into university.”

Corrupt politicians, he said, are getting rich, while the population gets poorer and more people try to emigrate in search of work.

The protests began in late November when Ukrainian President Viktor Yanukovich announced the end of a process to bring Ukraine closer economically and legally to the European Union. The students had seen the move toward Europe as a sign of “hope that things would change, that the rule of law would be instituted,” Bishop Gudziak said.

“The reneging on the promises he had been making for two years was an incredible betrayal,” the bishop said.

The demonstrations grew in strength after a police crackdown Nov. 30 left dozens of people injured. 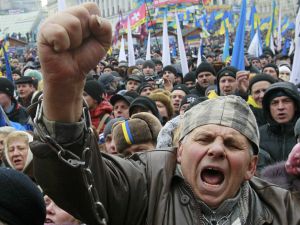 “The wanton violence — with no apologies, no one fired or even suspended, no sanctions” — made Ukrainians believe they had to act, Bishop Gudziak said. The police action “gave new life to a protest movement that was fizzling.”

As the bishop spoke, he said police were beginning to circle the area around the demonstrations, leading to fears of a new violent crackdown.

The BBC reported early Dec. 10 that police were dismantling barricades raised by the protesters near government buildings. The opposition Fatherland Party claimed security forces had entered its offices and seized computer equipment, shutting down the party’s website.

Many of the protesters believed Yanukovich withdrew from the European Union association agreement in preparation for a new trade agreement with Russia. In reaction, some protesters toppled a statue of Vladimir Lenin in central Kiev.

At the Dec. 8 rally, Bishop Gudziak read the story of the healing of Jairus’ daughter from Luke 8. The passage, he said, “tells of people who were suspicious, cynical or afraid” and Jesus tells them, “Don’t be afraid, she will rise again.”

The bishop encouraged the protesters to continue their peaceful demonstration: “I told them the whole world is watching you with admiration: your smiles, your dedication, your fortitude in the cold, your determination, your songs.”

He said he told them that with peaceful protests, Nelson Mandela, Mahatma Gandhi and the Rev. Martin Luther King Jr. were able to change entire continents, and “you can change the country.”

PREVIOUS: Pope calls for action against hunger in a world of plenty

NEXT: Mandela ‘touched my heart, my soul, my life,’ says ex-fellow prisoner