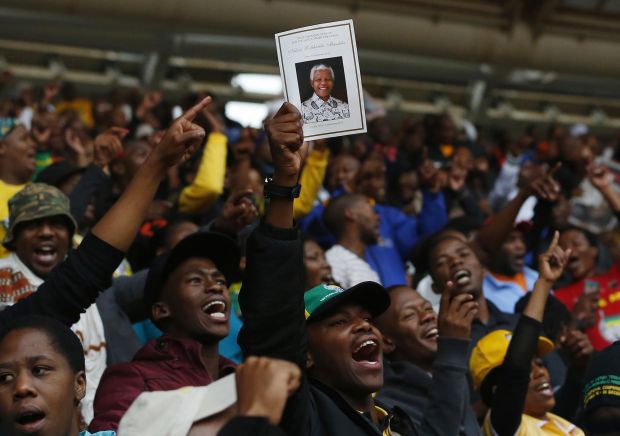 JOHANNESBURG (CNS) — Former South African President Nelson Mandela looked down on the tens of thousands of people gathered at his memorial service in Johannesburg and smiled as he watched them celebrate his legacy, said Andrew Mokete Mlangeni, a Catholic who was imprisoned for decades with the late anti-apartheid icon.

The first to address the crowds at the FNB Stadium Dec. 10 after prayers by Christian, Jewish, Muslim and Hindu leaders, 87-year-old Mlangeni said it was a “privilege and honor to say how Madiba touched my heart, my soul, my life.” Madiba was Mandela’s clan name.

“He touched many lives around the world. I am overjoyed by the outpouring of love and admiration by all of you here today,” Mlangeni said.

Mlangeni, who was on trial with Mandela in 1963-64 and imprisoned with him on Robben Island, said he had occupied a cell next to Mandela.

In prison, “Madiba exuded leadership,” said Mlangeni, who was released in late 1989, shortly before the start of negotiations that ended apartheid.

Mandela strongly influenced “my own evolvement as a man, South African citizen and ANC (African National Congress) member,” he said, noting that “without his guidance and leadership I would not have been the person I am today.”

Mandela’s greatness stemmed from his humility “and his belief in collective leadership,” Mlangeni said.

“He created hope when there was none” and was an inspiration to billions by “epitomizing the values of sacrifice and patience,” he said. 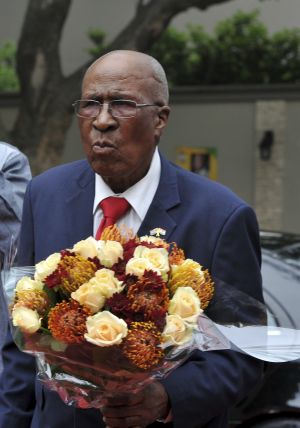 Mandela “negotiated the way forward in our nation’s darkest hour,” he said.

Mandela’s fight against racial domination was done “not by force, but with understanding and love,” Mlangeni said, noting that “it was his goal to unite all colors and creeds to live together in mutual respect and kindness.”

Anti-apartheid political prisoners “sacrificed years” to imprisonment, which undermined their health and well-being, yet on his release Mandela “remained a man of integrity” and an “incomparable force,” Mlangeni told tens of thousands who braved rain for the memorial.

The service was said to have been one of the biggest gatherings of world leaders, with nearly 100 presidents, kings, dukes, sheiks and celebrities in attendance. Pope Francis sent a special envoy, Cardinal Peter Turkson, president of the Pontifical Council for Justice and Peace. Archbishop William Slattery of Pretoria represented the Southern African Catholic Bishops’ Conference.

“I am not going to give you a blessing until all of you stand, and I want to hear a pin drop,” he said.

Speaking Afrikaans and Xhosa before switching to English, Archbishop Tutu said Mandela was “a great gift.”

He urged those present to join him in this pledge: “We promise God that we are going to follow the example of Nelson Mandela.”

In a prayer at the start, Anglican Archbishop Thabo C. Makgoba of Cape Town asked God to “help us to build on the firm foundations left by Madiba” and to “give us the grace to live the values of Madiba and to share them with the world.”

“Go forth revolutionary and loving soul …. Go home Madiba, you have certainly done all that is noble,” he said.

U.S. President Barack Obama told the gathering, “We will never see the likes of Nelson Mandela again.” But he said learning about Mandela “woke me up to my responsibilities to others and to myself, and it set me on an improbable journey that finds me here today. And while I will always fall short of Madiba’s example, he makes me want to be a better man. He speaks to what’s best inside us.”

He said it was tempting to remember Mandela as an icon, removed from society, but the former president “insisted on sharing with us his doubts and his fears; his miscalculations along with his victories. ‘I am not a saint,’ he said, ‘unless you think of a saint as a sinner who keeps on trying.’

“We can choose a world defined … by peace, justice and opportunity,” he said, noting that Mandela lived out his belief that, “‘I am the master of my fate, I am the captain of my soul.’

Zuma, U.N. Secretary-General Ban Ki-moon and four of Mandela’s grandchildren were among other speakers at the service.

NEXT: Pope Francis is third pope to win Time’s Person of the Year honor