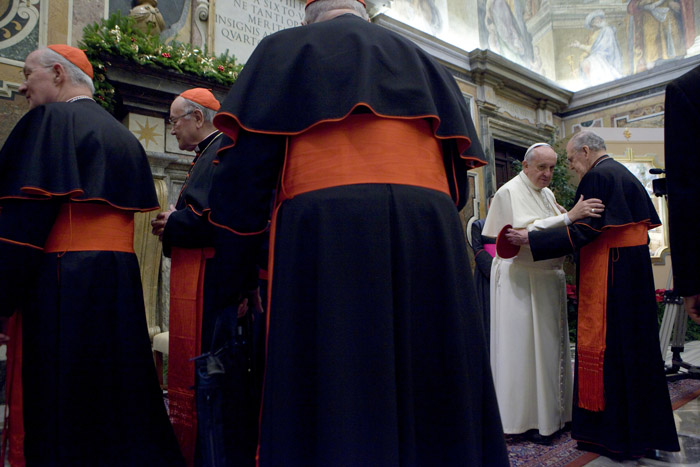 VATICAN CITY (CNS) — In terms of Vatican news, 2013 was surely one of the most eventful years in living memory. Here are the highlights at a glance:

— Feb. 11: Pope Benedict XVI announces that he will become the first pope in more than 600 years to resign.

— Feb. 25: Cardinal Keith O’Brien of Scotland, under accusation of “inappropriate conduct” with priests, announces that he will not vote in the upcoming papal conclave.

— Feb. 28: On his last day in office, Pope Benedict flies to the papal summer residence at Castel Gandolfo in a spectacular helicopter ride televised around the world.

— March 13: Cardinal Jorge Mario Bergoglio of Buenos Aires, Argentina, is elected pope. The first pope from the Americas and the first Jesuit to hold the office, he is also the first to take the name Francis.

— March 26: The Vatican announces that Pope Francis will not move into the papal apartments in the Apostolic Palace but remain in the Vatican guesthouse, where he stayed during the conclave.

— April 13: The Vatican announces that Pope Francis has named an international group of eight cardinals to advise him on governance of the universal church and reform of the Vatican bureaucracy. (The pope formally establishes the body as the Council of Cardinals in September.)

— May 2: Retired Pope Benedict returns from Castel Gandolfo and moves into a refurbished monastery within the Vatican walls.

— June: Leaked notes from Pope Francis’ private June 6 meeting with leaders of religious orders in Latin America describe the pope referring to a “gay lobby” in the Vatican.

— July 5: The Vatican announces that Pope Francis has cleared the way for the canonizations of Blessed John XXIII and Blessed John Paul II. The same same day, the Vatican publishes Pope Francis’ first encyclical, “Lumen Fidei” (“The Light of Faith”), which he acknowledges to have been written mostly by Pope Benedict.

— July 8: Pope Francis visits the southern Mediterranean Island of Lampedusa, a major entry point for immigrants without permission to enter Europe, where he decries hostility and indifference to the immigrants’ plight.

— July 22-28: Pope Francis visits Brazil for World Youth Day. His modest car is mobbed on the streets of Rio de Janeiro, he visits a notorious “favela” slum and celebrates Mass for more than 3 million people on Copacabana beach.

— July 28: On his flight back to Rome, the pope takes questions from the press on such controversial topics as homosexuality in the priesthood, divorced and remarried Catholics, the ban on female ordination and corruption in the Vatican.

— August: Pope Francis works through the summer at the Vatican, breaking with his predecessors’ summertime practice of relocating to the cooler climate of Castel Gandolfo.

— Sept. 19: Jesuit Father Antonio Spadaro publishes a wide-ranging interview with the pope, in which Pope Francis lays out his missionary vision and says the church “cannot insist only on issues related to abortion, gay marriage and the use of contraceptive methods.”

— Oct. 1: Italian journalist Eugenio Scalfari publishes an article based on a private meeting with Pope Francis, whom he quotes saying that the church should be less “Vatican-centric.” The Vatican later announces that the article is not based on a transcript of the conversation and should not be considered a record of the pope’s exact words.

— Oct. 1-3: Pope Francis meets with the Council of Cardinals for the first time, and the Vatican announces the body will work toward an overhaul of the Vatican bureaucracy.

— Oct. 4: Pope Francis celebrates the feast of St. Francis of Assisi by visiting the saint’s hometown, meeting with the poor and disabled, with Franciscan friars and Poor Clare nuns, and celebrating an outdoor Mass.

— Oct. 8: The Vatican announces that an extraordinary session of the Synod of Bishops will meet in October 2014 to discuss the “pastoral challenges of the family in the context of evangelization.” The pope has already told reporters the synod will explore a “somewhat deeper pastoral care of marriage,” including the question of the eligibility of divorced and remarried Catholics to receive Communion.

— Nov. 24: At a Mass in St. Peter’s Square to conclude the Year of Faith, Pope Francis venerates the bones of St. Peter, the first time the relics have ever been exposed for public veneration.

— Nov. 26: In his first apostolic exhortation, “Evangelii Gaudium” (“The Joy of the Gospel”), Pope Francis lays out a vision of the Catholic Church dedicated to evangelization in a positive key, with a focus on society’s poorest and most vulnerable, including the aged and the unborn.

— Dec. 5: Pope Francis, during his second round of meetings with the Council of Cardinals, accepts their proposal for an international commission dedicated to protecting children against sexual abuse.

PREVIOUS: Photo of the day