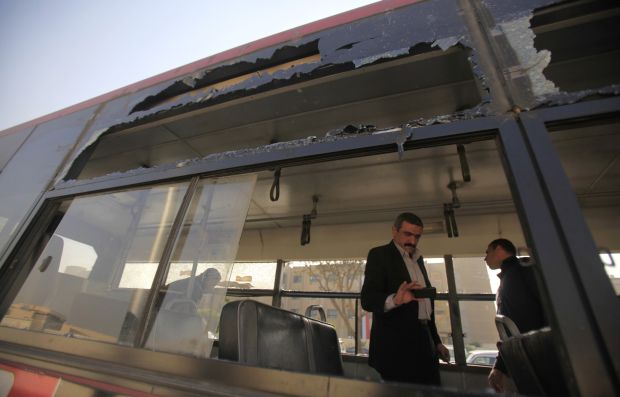 CAIRO (CNS) — A Dec. 26 attack in Cairo and other violence will not keep Egypt from going ahead with its planned referendum on a new constitution, said Coptic Catholic Bishop Antonios Aziz Mina of Giza, Egypt.

“These explosions will not prevent the mass mobilization for the referendum on the constitution. On the contrary, they increase our determination … to follow through with advancing the nation,” Bishop Mina told the Egyptian online newspaper, Al Youm Al Sabea, after an explosion hit a Cairo bus, wounding five people.

The attack was one of several Egypt has witnessed since the military ouster of Islamist President Mohammed Morsi last July and the ensuing crackdown on Morsi’s Muslim Brotherhood, which the interim government labeled as a terrorist group Dec. 25.

On Dec. 24, a suicide car bomber attacked a police facility in the Nile Delta city of Mansoura, killing 16 people.

Bishop Mina strongly condemned “the terrorist attacks” he said were taking a toll on Egypt’s civilians, according to the newspaper report.

In an interview earlier in December, the bishop told Catholic News Service that the negative effects of dictatorship, corruption and theft in Egypt would take decades to overcome but that the country’s new constitution was a step in the right direction.

The bishop was one of 50 people on a national assembly tasked with producing a draft for a new constitution, which the group finished in early December. The draft will be put to a nationwide referendum Jan. 14 and 15.

“The new generation grew up with no democracy and with corruption, selfishness, egotism and theft, where the clever takes advantage of his peers. All the morals that disappeared will take a long time to return, not in a year, or 10, but it can take 30 or 40 years,” Bishop Mina told Catholic News Service at his residence in the satellite city 6th of October, 20 miles outside the Egyptian capital, Cairo.

He said it would take sustained improvements in education, increased democracy and a general “respect in society for all Egyptians,” regardless of creed, in order for the predominantly Muslim country to rebuild and prosper, and that the new constitution could set the tone for this to happen, if “properly implemented.”

“Will this constitution … be put aside in a pretty cover in some office somewhere? If it stays only words on paper, it will be a big loss for Egypt. But if it starts to be properly implemented on the ground, it will be the best constitution for this country,” said Bishop Mina.

The new draft constitution is meant to replace one passed by Morsi and paves the way for new parliamentary and presidential elections.

The document lacks the Islamist-inspired provisions of the constitution approved while Morsi was still in office last year and restricts the formation of political parties based on religion.

It offers more civil liberties but also further strengthens the autonomy of the country’s military, which overthrew Morsi following mass protests against him.

“The draft allows for the military trial of civilians, discriminates against foreign nationals, and leaves the door open for undue restrictions on freedom of expression and assembly,” Amnesty International stated soon after the new draft constitution was announced.

But Bishop Mina focused on what he termed “positive articles” that he said would “ensure more freedoms,” including for Egyptian women as well as for Egyptian Christians who — for the first time in modern history — will be allowed to build churches without presidential decree under a new law promised in the draft constitution.

He said he planned to vote in favor of the new constitution in the January referendum but was not calling on Egypt’s estimated 300,000 Catholics to necessarily do the same.

“I will vote yes, but that is not to say I am going to stand in church and tell people what to do. The (Coptic Catholic) church is telling the people ‘read the constitution, and whatever your conscience tells you to do, do it,'” he said.

Like most other Egyptian Christian leaders, Bishop Mina blamed the ongoing violence in the country on the Muslim Brotherhood and its supporters who back the now imprisoned Morsi and who are calling for his release and restoration to power.

Brotherhood leaders, many of them in jail, have denied their followers are behind the violence, much of which has targeted Christians and their properties as well as government and security facilities.

Bishop Mina said he expected more attacks on Egypt’s Christian community, which makes up an estimated 10 percent of the country’s nearly 85 million people, but “it is the price we know we have to pay” for “Egypt to get back up on its feet again.”

He said he was concerned that at such troubled times, many young Christians — and even more young Muslims — were seeking to emigrate because “they feel oppressed, and their economic situation is not comfortable.”

But he said young people should stay in Egypt to help it rebuild.

“We are telling our children, our life is the life of the cross, and no one can build the country except her children. The youth have to work with the country and when the level of the country rises, so will the level of its Christians and Muslims, together,” he said.

NEXT: Syrian Christian refugees ponder their plight at Christmas