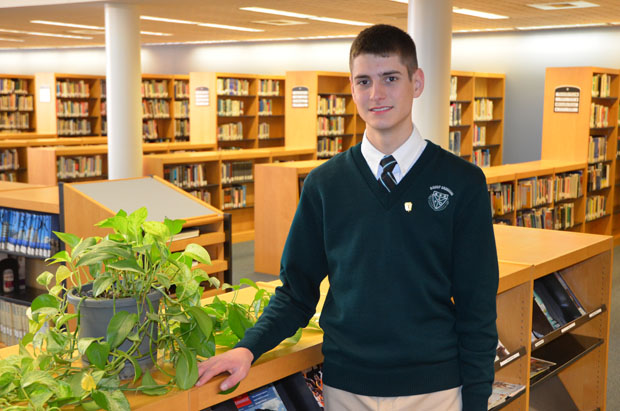 If you ask someone to stand in front of a group and speak, there’s a good chance that person is facing their greatest fear and feeling anxious about it.

For Joseph Kelly, a junior at Bishop Shanahan High School in Downingtown, public speaking doesn’t faze him. Kelly is on the forensics team where he gives extemporaneous speeches, and he is a member of the Academic Bowl team that competes against area high school teams. He also participates in the Mathletes Club.

This may not seem like a big deal for a high school junior. But Kelly, 17, has been diagnosed with an anxiety disorder and Asperger syndrome. Asperger’s is an autism spectrum disorder, and individuals often have difficulties with social interactions and nonverbal communication.

Despite these challenges, Kelly has thrived both in his extracurricular activities and academically. He has been ranked first in his class since freshman year, and he is a member of the National Honor Society.

When Kathleen Eckinger, a guidance counselor at Shanahan, met Kelly in freshman year she was impressed that he took the initiative to participate in school activities.

“Some people seem to have a preconceived attitude toward people with these diagnoses, but at the end of the day, they don’t live with it. They have no idea what it’s like to live like this. They shouldn’t judge people like me,” said Joseph Kelly, Bishop Shanahan High School.

“He would really put himself out there trying to get involved with different clubs and activities which I have to commend him for,” Eckinger said. “Putting yourself out there and not making the team or not being accepted can be difficult.”

Over the past three years Eckinger has watched Kelly move beyond his comfort zone and emerge as a leader in school.

“We’re seeing Joseph step up to the plate with Mathletes and Academic Bowl,” she said. “My hope is to see him in a leadership role in those clubs next year. He’s very dependable, and if I need something done, I know he will do it.”

Recognizing these accomplishments, Eckinger nominated Kelly for the 2013 High School Leadership Award from Widener University and WCAU-TV/NBC10. He was among 134 juniors selected from regional high schools to receive the award. The students are recognized for their academic excellence and character traits that mark them as potential leaders and future citizens of character.

“It was surprising, and I certainly didn’t expect it,” Kelly said. “I’m honored to receive the award.”

Award winners also receive a scholarship of $20,000 over four years if they enroll at Widener University for undergraduate studies. Kelly plans to pursue a degree in secondary education with a minor in history, his favorite subject.

He is considering Widener as well as other local colleges including Villanova University, St. Joseph’s University, Immaculata University and Cabrini College. His career goal is to teach history in high school or college.

“I love it because it’s a great school academically,” he said. “I also like being able to express my faith because God gave me everything, and I feel I should praise and thank him for it. I wouldn’t be able to do that in a public school.”

As for maintaining his number-one ranking, Joseph takes it in stride. “There’s always pressure from something,” he said. “I just try to cope with it any way possible.”

Right now Kelly’s focus is preparing for mid-term exams. “Mid-terms are always a stressful time of year,” he said, noting that he appreciated having additional study time due to the Martin Luther King Jr. holiday and the recent snowstorm.

His favorite extracurricular activities are the forensics and academic bowl teams. “With both activities I get to learn new things, and I get to meet other people and interact with them,” Kelly said.

Eckinger said Kelly continues to expand his peer circle as he gets more involved in school. “He’s such a nice genuine individual,” she added. “It’s hard to not like him, and I think that’s part of what helps in forming those peer relationships.”

Outside of school he enjoys taking walks and watching movies. “I’m a huge fan of cinema,” he said. His absolute favorite film? “The Lion King.”

“I love the plot and the animation, and the music is awesome.”

Kelly explained that one of the challenging aspects of his diagnoses is that other people can be judgmental.

“Some people seem to have a preconceived attitude toward people with these diagnoses, but at the end of the day, they don’t live with it,” he said. “They have no idea what it’s like to live like this. They shouldn’t judge people like me.”

A celebration for the leadership award winners will be held March 20 at the National Constitution Center in Philadelphia, and they will be invited to a leadership conference at Widener University this fall.

NEXT: Willow Grove school gets ready for kindergarten