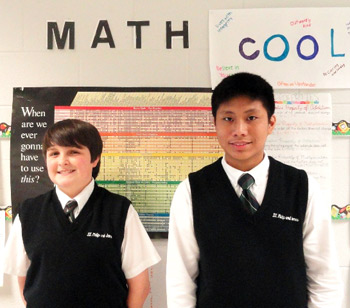 “The foundation of knowledge is in mathematics,” said Roger Bacon, a Franciscan friar and philosopher back in the 13th century. Yet in world surveys, American students have slipped to 29th place in math assessments, according to a recent international survey.

The foundation for a solid math education is laid in elementary school, and some schools are taking notice of this.

At St. Philip and James School in Exton, all students in grades six through eight are exposed to algebra, according to Cindy Schneider, who is the honors and eighth grade math teacher at SS. Philip and James, with 11 years teaching experience at the school.

The testing is done in four 30-minute sessions at the participating schools that then pass the results on to the South Carolina-based Catholic Math League for ranking.

In all, 125 students in grades six through eight participated. There were 33 students in the honors and 92 in the non-honors program.

Encouraging students to compete at the middle school level, Schneider said, “introduces them to out-of-the-box thinking so that they may explore problems they haven’t yet learned or experienced and to discover the level of problem-solving required by competitive mathematics.”

Getting back to Roger Bacon’s thesis that mathematics is the foundation of knowledge, the question is, how will mathematics impact the future lives of Cindy Schneider’s students, at least as they understand it now?

“Math is one of the most important things we can learn,” said eighth grader Katie Bradley. “We use math to pay taxes and bills, to calculate tips in a restaurant and to find the better buy in a store. I will use math in all of those ways no matter what my profession may be. Math will be even more important in the future, when I am responsible for all of my own taxes, bills and payments.”

“In my future I will use math to maybe teach,” said seventh grader David Carangan, who ranked ninth nationally out of 1,315 pre-algebra students. “I will do my taxes to the exact amount to save money. I will probably use it to find the better buy and save money.”

“I will use math in my future in everything I do,” said Samantha Capriotti, grade eight. “I plan to open my own bakery where I will have to measure and multiply ingredients. I will have to pay my workers’ salaries and bills for my business. From my job to finding the tax while shopping, math will be an important part of my whole life.”

“I plan to use math every day of my life,” said Matt Delphais, an eighth grader who ranked 18th in the nation in algebra out of 1,100 students and first in Pennsylvania. “I hope to continue learning math through high school and college. I believe I can build my future on my mathematical knowledge.”