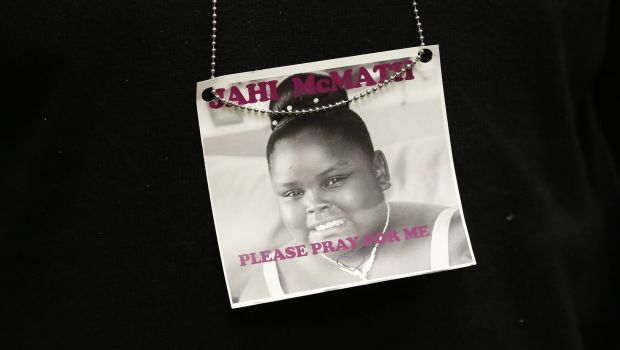 A photograph of 13-year-old Jahi McMath, who doctors had declared brain dead following complications after routine surgery for sleep apnea, is seen in late December 2013 on a necklace in Oakland, Calif. (CNS photo/Stephen Lam, Reuters)

BALTIMORE (CNS) — Recent conflicts in California and Texas between physicians and the families of patients considered to be brain dead have prompted new questions about end-of-life decision-making.

But the nationally publicized case of 13-year-old Jahi McMath in Oakland, Calif., and the less-well-known case of Marlise Munoz, a 33-year-old pregnant woman in Fort Worth, Texas, provide a teaching moment to help clarify Catholic teaching on the determination of death, according to the leading Catholic bioethical organization.

The cases are distinctly different, but each pits health care professionals against relatives of the brain-dead patients.

McMath’s family transferred her from Children’s Hospital & Research Center Oakland to an undisclosed location Jan. 5 to continue medical treatment despite the issuance of a death certificate Dec. 12. Her doctors had declared McMath brain dead following complications after routine surgery for sleep apnea.

McMath’s mother, Nailah Winkfield, has said her Christian beliefs require her to remain open to the possibility that God will perform a miracle and restore her daughter to health.

Munoz, who was 14 weeks pregnant when she collapsed at home in November and was deprived of oxygen for up to an hour, is being kept on life support at John Peter Smith Hospital in Fort Worth against the wishes of her husband and parents. Hospital officials say they cannot remove her respirator because of a Texas law that prohibits doctors from withdrawing “life-sustaining treatment” from pregnant women.

But the National Catholic Bioethics Center in Philadelphia said in a Jan. 7 statement about the McMath case that nothing in Catholic teaching would contradict the determination of death by the teen’s physicians, using “the rigorous application of neurological criteria.”

If the facts in the McMath case are being accurately reported in the media, the center’s statement said, the determination of death has been made “by physicians repeatedly and rigorously applying the neurological criteria” and confirmed by an independent, court-appointed pediatric neurologist from Stanford University.

“If this is accurate, at this point there would be no moral obligation for a hospital or physician to perform any procedure on a corpse such as placing a feeding tube or trying to stabilize the bodily functions that are kept working using mechanical means,” it added.

The center quoted from talks by Popes John Paul II and Pius XII, as well as the U.S, bishops’ “Ethical and Religious Directives for Catholic Health Care Services,” to back its conclusion. The directives, which guide ethical decision-making in Catholic health facilities, read: “The determination of death should be made by the physician or competent medical authority in accordance with responsible and commonly accepted scientific criteria.”

The Munoz case in Fort Worth is complicated by several factors — her pregnancy and the inability of her unborn child to survive outside the womb; the law passed in Texas in 1989 and amended 10 years later that requires the continuation of life support for pregnant women; and federal health privacy laws that restrict any sharing of information with the media without the permission of Munoz’s family, which the hospital says has not been granted.

Even if Munoz’s physicians have determined her to be brain dead, there is another patient to consider, said Marie T. Hilliard, director of bioethics and public policy and a staff ethicist at the National Catholic Bioethics Center. The unborn child cannot survive without receiving oxygenated blood from his or her mother until he or she reaches at least 23 or 24 weeks of gestation, Hilliard said.

The unborn child’s surrogate decision-makers — which in the Munoz case would apparently be his or her father, Erick Munoz, 26 — must act in the child’s best interests in determining whether continuing medical treatment would be disproportionately burdensome on the patient, the family and the community in relation to the anticipated outcome, Hilliard said.

Catholic teaching is clear, she added, that any “direct, intended termination of a pregnancy” before viability is an abortion and not permitted. “But we don’t have the facts to ascribe any intent” to Munoz’s husband and parents, who are seeking to force the hospital to remove the woman’s respirator, Hilliard said.

It also is unclear whether the Texas law barring the removal of “life-sustaining treatment” for pregnant women was intended to apply to women who have been declared brain dead.

Jeffrey Patterson, executive director of the Texas Catholic Conference, did not respond immediately to a Catholic News Service request for comment on whether the conference supported the original law or an amended version in 1999.

According to a 2012 report from the Center for Women Policy Studies in Washington, Texas is one of 12 states that “automatically invalidate a woman’s advance directives if she is pregnant.” Another 14 states base their legislation on the model Uniform Rights of the Terminally Ill Act, which requires that a pregnant woman be given life-sustaining treatment if it is “probable” that the pregnancy will develop to the point of a live birth.

Five states — Maryland, Minnesota, New Jersey, Oklahoma and Vermont — allow a woman to specify in her advance directives whether they should apply if she is pregnant and require that her wishes be followed.

Hilliard said she hopes the Munoz family is receiving assistance from a hospital chaplain or social worker to work through the complexities of the case and their own feelings of loss.

“Because in any of these situations, there must be terrible grieving going on,” she said. And if the Munoz baby manages to survive, he or she “could be a great comfort to the family,” she added.

NEXT: ‘Great misunderstanding’ seen on church’s teachings on end of life