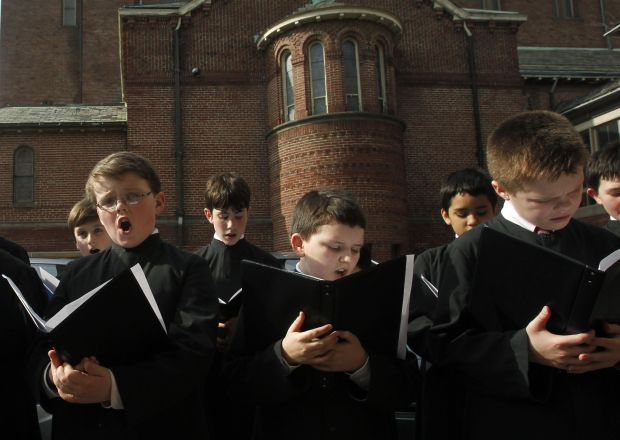 Boys from the Boston Archdiocesan Choir School sing as a bell is rung for Pope Benedict XVI at St. Paul Parish in Harvard Square in Cambridge, Mass., Feb. 28, the last day of his papacy. (CNS photo/Jessica Rinaldi, Reuters)

See video at bottom of story

CAMBRIDGE, Mass. (CNS) — While some students may fantasize about breaking into song in the middle of a school day, it’s a common occurrence at St. Paul’s Choir School.

“We used to joke that it was like an episode of Glee,” said Merritt Prinzivalli, an English teacher at the only U.S. Catholic boys’ choir school, nestled in Harvard Square. “I joke with the boys and say, ‘Gosh, you know I come in in the morning with a song on the radio in my head, and my classroom is right underneath the rehearsal room, and I always leave the school day singing Alleluia.'”

The frequent melodious reverberations gave eighth-grader Atticus Olivet a lasting impression of the first time he walked into the school building.

“It was magical,” Atticus said, as he fiddled with the red and blue striped tie that was resting on his flawlessly pressed white shirt. “It’s still magical every day that I come to school. Yes, we’re learning and we’re studying and our workload can be pretty crazy. But, hey, we get to go to school where music is always around you.”

Founded in 1963, the St. Paul’s Choir School is celebrating its 50th year, and last November a group of current students traveled to Rome to sing for Pope Francis.

“It’s a great honor for our boys to perform for our new pope, on this, our 50-year anniversary,” said William McIvor, headmaster of the school, which has a maximum enrollment of 60 students in grades fourth through eighth.

In the days before the boys — and a select group of teachers, parents and staff — departed for Rome, there was a growing exhilaration about the trip, endless rehearsals and a packed church to hear the choir perform.

“To hear the boys sing, with their angelic voices, at Mass on Sunday, is really a transformative experience,” said Paul Haley, who serves on the school’s advisory board and is the parent of an alumnus.

Haley first became aware of the school in the 1970s when he was an undergrad at Harvard University, which is just a short walk from St. Paul’s Catholic Church.

The first time he attended Mass at the church, he was struck by the intensity of the boys’ choir.

“It was like I was hearing the voice of God,” Haley said in an interview with Catholic News Service. “To hear the liturgy sung with those beautiful sounds forever changed how I interpret the Mass. It’s deepened my faith.”

He was thrilled when his son showed an interest in the school and auditioned and was equally as proud when he was accepted.

Life at the choir school may be fun, but it also has challenges.

The musical training is rigorous, the academic standards are high, and the performance schedule is grueling, McIvor said.

“The boys work so hard at this school, from music theory to Latin, to singing at vespers on Wednesday evening, not to mention that Sundays are an all-day affair here,” said Michael Flynn,” a parent of one of the students and president of the school’s parents’ guild. “They travel all over too, but you know what’s funny, is when you drive a group of the boys to and from a performance, they sing their parts on the way there and on the way home.”

Eighth-grader Forrest Eimold admitted that the schedule has zapped his energy level from time to time, and Prinzivalli said she has seen the effects of the exhaustive schedule on her students.

“As a teacher I try to be as cognitive as I can about their choir obligations and try not to not to be too heavy on homework those nights when the schedule is really intense,” she told CNS. “But, it can take a while for a student to learn the time management skills that are required of them.”

The choir rehearsal room can also be an intimidating atmosphere for new students.

“My first thought when I first entered into this rehearsal room was ‘they said I could sing, but not this good, I’m not this good,'” said Theodore Why, an eighth-grade student at St. Paul’s.

But, the boys who attend the school — for the most part — are up to the challenge, said John Robinson, the school’s director of music.

“We’re preparing boys for the future for roles as singers in choirs, hopefully vocations as well come from here,” he said. “It’s prayerful singing. It’s a very important, powerful tool of art and music in service to the liturgy that we feel very strongly about.”

As McIvor looks ahead to the next 50 years of the St. Paul’s Choir School, he hopes it will serve as a model for future institutions of learning and music.

“We would love to see other Catholic choir schools emerge across the country,” he said. “The lives of the boys who have attended here have been fully enriched. We’d love to see that happen in more places.”

The experience of attending St. Paul’s has provided 14-year-old Forrest with a passion for sacred music.

“The music here is incredible,” he said, after taking a break from playing the piano. “Going to a school where you actually have music as an important part of your day is very amazing.”

NEXT: Bill would require feds to respect state laws on traditional marriage