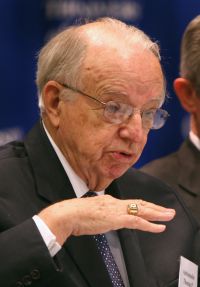 Former U.S. Ambassador to the Vatican Thomas Melady, who died Jan. 6 at age 86, is pictured in a 2009 photo. (CNS photo/Bob Roller)

WASHINGTON (CNS) — Thomas P. Melady, the former U.S. ambassador to the Vatican who died Jan. 6, was remembered at his Jan. 13 funeral Mass as a man who loved his Catholic faith and who was inspired by that faith to reach out and help others.

“Through the mist of our sorrow and deep sense of loss, we have been moved by the stories we’ve heard of the lives he touched with the gift of self — the most precious gift,” Christina Melady, the ambassador’s daughter, said at the end of the nearly two-hour funeral Mass that was offered at the Cathedral of St. Matthew the Apostle in Washington.

Monica Micklos, Melady’s other daughter, said her father “was a man of strong values and principles.”

“His strong faith guided him in the decisions he made,” Micklos said. “He was a man of strong character … who taught us to stand up for what we know is right. He showed us faith in action can change lives.”

Washington Cardinal Donald W. Wuerl was the principal celebrant of the funeral Mass, which was concelebrated by Bishop Paul S. Loverde of Arlington, Va., and about 20 priests. Msgr. James Watkins, pastor of Immaculate Conception Parish in Washington and a friend of the Melady family, was the homilist.

“God saw fit through Tom Melady — from the moment of his conception until his natural death — to bring about a small part of his kingdom,” Msgr. Watkins said. “God prepared Tom for a life of public service.”

Noting that Melady also served as ambassador to Burundi and Uganda, Msgr. Watkins said that “as an ambassador, the representative of our nation, Tom’s embrace of people of different faiths, different religions, across the board was always to bring about peace.”

While Melady was a man of public service, Msgr. Watkins said, he was also a man of faith.

“Tom loved the church, he loved the institution, he loved the sacraments, he loved the rules because Tom was a man of truth,” Msgr. Watkins said. “He understood the truth of his church — his faith — and its doctrines.”

The priest said Melady was “a guiding light with tremendous care and concern for people” who treated people with charity and humility “regardless of their power or station in life.”

“Tom was always living for the Lord,” Msgr. Watkins said. “Tom has gone home to a place far more beautiful than Rome, which he loved, and more eternal — the new Jerusalem, where there is no more pain, no more sorrow.”

In addition to serving as an ambassador, Melady was the author of 17 books and was a senior diplomat in residence and a professor at the Institute of World Politics in Washington. In that post, he was active in mentoring students and others.

“He loved advising, guiding and mentoring. He experienced great joy in helping others and empowering them to believe in themselves,” Miklos said of her father. “Our home was a meeting place for people of diverse races and religions, and he treated everybody with respect and dignity — whether you were the president of a university or a parking attendant. He believed that common ground was stronger than what divides us.”

During the funeral, Cardinal Wuerl said “the church gathers to offer her last fond farewell to Tom and to thank God for his life and witness.” The cardinal also prayed that God would “welcome him into your presence so that he might enjoy eternal light and peace.”

Melady was a Knight of Malta and recipient of the Grand Cross of the Order of Malta, and many Knights and Dames of Malta were among the hundreds who attended the funeral Mass.

“Tom Melady was a wonderful, respected diplomat, said former Ambassador Jim Nicholson in a Jan. 12 interview. “First and foremost, he was a devout Catholic and set a great example for all the people with whom he came into contact (with).”

In addition to his two daughters, Melady is survived by his wife of 52 years, Margaret, and by seven grandchildren.