Mideast Catholic leaders give mixed reactions after death of Sharon 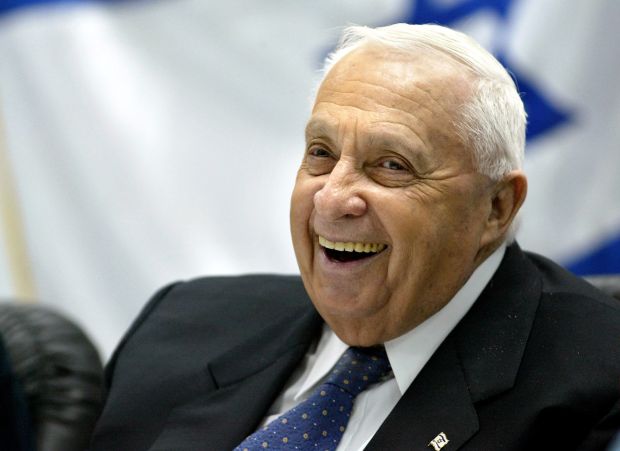 Former Israeli Prime Minister Ariel Sharon smiles during a meeting with army and police forces at an army base near Jerusalem in this 2005 file photo. (CNS photo/Nir Elias, Reuters)

JERUSALEM (CNS) — Former Israeli Prime Minister Ariel Sharon, a controversial figure in Israel and abroad, died Jan. 11 after being in a coma following a stroke eight years ago. He was laid to rest at his Negev farm Jan. 13.

Beloved by many for his humor and warmth and for his strong leadership in forging the nation, he also was disdained by many for his military ruthlessness and the way some of his policies had serious negative impacts on Palestinian Christians and Muslims.

Melkite Archbishop Elias Chacour said although the Catholic community of Israel was praying for Sharon’s eternal rest, Catholics could not forget the things he did that hurt Palestinians.

“We have mixed feelings. We can’t remember him as always a good man because (of) some events in his life which hurt Palestinians. We can’t forget Sabra and Shatila and when he went up on the Temple Mount and started the horrible intifada,” the archbishop told Catholic News Service in a telephone interview from his Haifa office.

Though Sharon is remembered by many Israelis as a great military leader who defended and fought for his country, his detractors recall him as the man who, as defense minister in 1982, failed to prevent a Lebanese Christian massacre of Palestinians at the Sabra and Shatila refugee camps near Beirut shortly after Israel invaded Lebanon in 1982. Sharon was forced to resign as defense minister after an Israeli inquiry found him indirectly responsible.

“He was a tough military leader without mercy. What happened in Sabra and Shatila was a reference point for all his life,” said Archbishop Chacour.

“From one side, he participated in or led more of the wars between Israelis and Arabs,” Msgr. Shomali told CNS. “But at the end of his career he founded a political party (Kadima) whose aim was to make peace with Palestinians. He fell sick before he could achieve his aim.”

After his military career, Sharon entered politics with the Likud Party, serving in ministerial posts such as defense minister in Likud-led governments from 1977 to 1992 and from 1996 to 1999. In 2000, he became head of Likud and led Israel as prime minister from 2001 to 2006, when he fell into a coma following a stroke.

Bishop Richard E. Pates of Des Moines, Iowa, chairman of the U.S. bishops’ Committee on International Justice and Peace, was in the Holy Land when Sharon was buried.

“Sharon was the leader of Israel at a particular time,” the bishop said. “He was very much a person of his time reflected in his attitude of Israel at the time.”

One of Sharon’s last divisive acts was the withdrawal of the Israeli civilian settlements from the Gaza Strip in 2005, a move that still angers many Israelis.

Archbishop Chacour recalled that, just after the withdrawal and just three days before he had his stroke, Sharon called him to wish him a merry Christmas.

The archbishop said he encouraged the Israeli leader to continue on that new path.

He said Sharon replied: “I promise that I will dedicate all the rest of my life to make the peace you have worked for (for) 30 years, to make that a reality.”

“He didn’t have time to implement this,” said Archbishop Chacour. “He didn’t have the luck like (assassinated Israeli Prime Minister Yitzhak) Rabin, to die while making peace.”