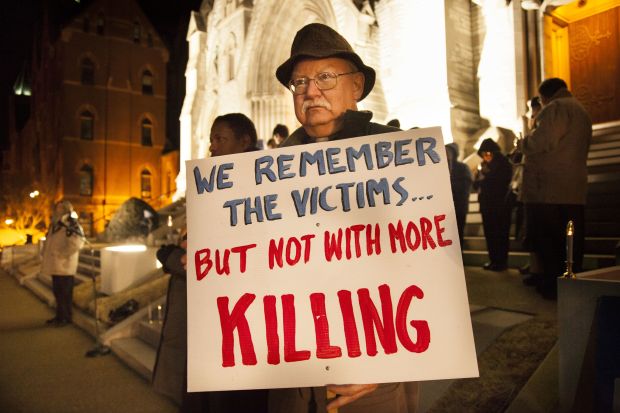 The U.S. Supreme Court had vacated three separate stays of execution after issuing a temporary stay of the execution the previous day. At issue in the appeal was the need to disclose the compounding pharmacy and details of the drug used in lethal injection.

Vigils were held across the state Jan. 28 to protest the execution, including one on the steps of St. Francis Xavier (College) Church on the St. Louis University campus in midtown St. Louis.

More than 20 people came to the vigil at the campus church, mostly Catholics, including Deacon John Flanigan of Most Holy Redeemer Parish in Webster Groves. They prayed with Smulls via a telephone call made by a boyhood friend. Many were moved to tears as the deacon prayed psalms and the group sang a song.

Smulls, who was from St. Louis, spoke briefly to say he appreciated the prayers and the fact that people stood out in the cold for him.

Missouri’s Catholic bishops have reaffirmed the Catholic Church’s opposition to the use of the death penalty, saying it disregards the dignity and sanctity of human life and, because of the modern justice system, capital punishment is not necessary to protect society.

Smulls, 56, was found guilty in a St. Louis County Circuit Court in 1992 of first-degree murder. On July 27, 1991, Smulls and Norman Brown robbed a jewelry store in Chesterfield owned by Stephen and Florence Honickman.

Court records show Florence Honickman ran and hid behind a door after looking up and seeing Smulls aiming a pistol at her. Smulls fired three shots at her, striking her arm and side. Smulls then fired several shots at Stephen Honickman, who was struck three times. Stephen Honickman died and his wife suffered permanent injuries from the attack.

Religious leaders, including the Catholic bishops of Missouri, had filed a clemency petition with Gov. Jay Nixon asking that he stop the execution. Nixon denied clemency, citing the “cold-blooded, deliberate manner” of the crime.

Besides stating their moral opposition to capital punishment, the clemency petition highlighted the role they said racial bias played in this case. The first trial for Smulls, who was African-American, was heard by a multiracial jury and resulted in a hung jury. In his retrial, the prosecutor removed an African-American juror, resulting in an all-white jury that convicted and sentenced Smulls.

The state executed Joseph Franklin Nov. 29 and Allen Nicklasson Dec. 11. These were the first executions to take place in Missouri since February 2011.

Franklin was a white supremacist who in the late 1970s killed as many as 20 people — blacks, Jews and interracial couples. Nicklasson, also white, was executed for killing a man who came to his aid after his car broke down on a highway in 1994.

The executions run counter to a national trend of a decline in the number of executions.

The Death Penalty Information Center released a report showing 39 executions took place in the United States in 2013, the second time in 19 years that there were fewer than 40 executions. The center report also shows that public support for the death penalty has reached its lowest level in 40 years.

Kenny is a staff writer at the St. Louis Review, newspaper of the St. Louis Archdiocese. Review photographer Lisa Johnston contributed to this story.