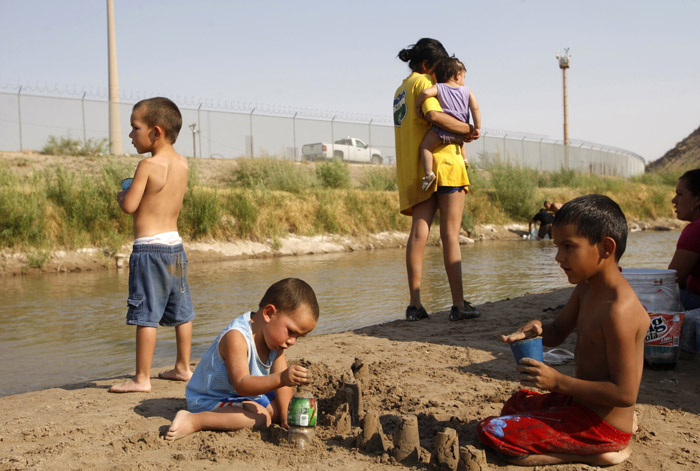 Children play on the shores on the Mexican side of the Rio Grande at the border crossing between between Mexico and the United States in Ciudad Juarez. (CNS file photo)

WASHINGTON (CNS) — Dangerous conditions in their homelands are leading tens of thousands more families in Central America and Mexico to send their children by themselves to cross the U.S. border illegally, according to a report by the U.S. Conference of Catholic Bishops’ Committee on Migration.

Citing data from two U.S. federal agencies, the report estimates that, based on the dramatic increase in unaccompanied minors apprehended at the border over the past 10 years, as many as 60,000 children traveling without relatives could enter the country this fiscal year.

The report, released Jan. 30, was drawn from the observations and data gathered during a trip to Mexico and Central America in November by a delegation representing various Catholic agencies that work with immigrants and immigration-related issues.

It delves into the reasons why families send their children away, the dangers the travelers face and how they are treated if they come to the attention of various countries’ government agencies along the way.

Among other things, the report recommends two dozen steps for various governments, child welfare experts, local communities and nongovernmental agencies. The recommendations address the home-country problems that lead families to send their kids away including the prevalence of criminal gangs; how child welfare systems function; the particular difficulties of indigenous youth and procedures for asylum and repatriation.

The report said the delegation found “a series of interrelated factors” contributed to the increase of unaccompanied minor migrants. It cited data from the Office of Refugee Resettlement, a division of Health and Human Services, showing an average of 6,800 unaccompanied minors were apprehended in the U.S. each year between 2004 and 2011. In 2012 the number doubled to 13,000 and nearly doubled again to more than 24,000 in 2013.

Among the primary factors cited for the increase in traffic to the border by children and teens, were:

— Weak economies, particularly in Guatemala, resulting from a decline in the coffee industry, and in El Salvador because of a decrease in remittances from abroad during the global recession.

— Violence “and a corresponding breakdown of the rule of law” that have “created a culture of fear and hopelessness.”

Criminal gangs are the main factor in the violence problem, the report suggested. Extortion, kidnapping, forced recruitment of children into gangs and trafficking in drugs and humans are rampant in the hometowns and regions of many of the child migrants, it said.

Violence and danger confront children at home and on the route to another country, it said. Even children who might be eligible for asylum often don’t get the opportunity to apply, it said.

The recommendations for the United States include:

— Adopt new approaches for placing such minors with extended family, and provide them legal counsel. Screening for exposure to gang activity should be provided.

— Adopt international principles for repatriation that are based on the best interests of the child.

— Have the Border Patrol develop “trauma-informed and developmentally appropriate” screening for children who may need protection based on forced sex, forced labor and other abuses and exploitation.

— Boost funding for the programs that support unaccompanied minors.

— Invest in programs to help minors repatriate to their home countries and those that help encourage youths to remain at home.

For other countries, the report recommends:

— Mexico should build capacity for handling child welfare cases, including screening for trauma and human trafficking.

— El Salvador should expand programs such as one operated by Catholic Relief Services to help children who are at risk develop skills and training to be safe and have employment options.

— Honduras should, with help from the United States, improve capacity for protecting children, reunify families and shelter minors without families.

NEXT: Catholic advocates find little to praise in farm bill passed by House