Youths must help world see God has plan for ‘each life,’ priest says 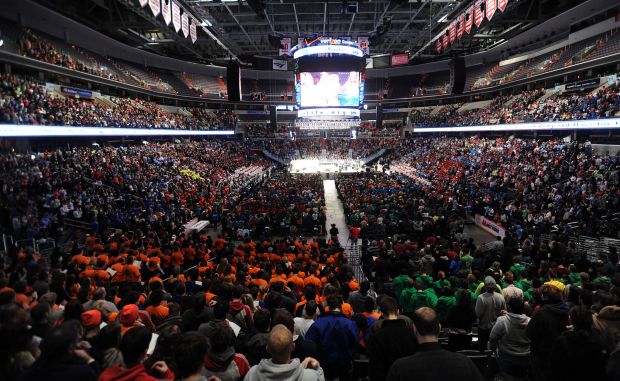 Thousands of young people gather for a pro-life youth rally and Mass at the Verizon Center in Washington Jan. 22. (CNS photo/Leslie Kossoff)

WASHINGTON (CNS) — Braving near-record low temperatures and Arctic-type wind chills, thousands of young people from across the Archdiocese of Washington and the United States gathered in Washington for a rally and Mass prior to the annual Jan. 22 March for Life.

“We can help the world understand that no one is an accident, all have a purpose and are loved because each person has the face of Jesus Christ,” Father Michael Paris, a parochial vicar at St. Patrick Parish in Rockville, Md., told more than 10,000 youth who gathered for the Archdiocese of Washington’s Youth Rally and Mass for Life at the Verizon Center in downtown Washington.

The priest was the homilist at the Mass, which was celebrated by Cardinal Donald W. Wuerl of Washington. Concelebrants included several bishops, including Washington Auxiliary Bishop Martin D. Holley, and more than 160 priests.

“I believe God wants to use us to end abortion. … By helping the world see that God has a plan for each life, that everyone is loved by God,” Father Paris said. “If people believed that, they would never think that killing a child could be an option. … Abortion cannot stand if each person believes this.”

The Mass and Rally for Life is traditionally held on the morning of the annual March for Life, which this year marks the 41st anniversary of the Supreme Court’s 1973 Roe v. Wade decision that legalized abortion on demand in the United States.

The same day the archdiocese also sponsored an additional Youth Rally and Mass for Life that drew thousands of mostly out-of-town marchers to the Stadium Armory in Washington. Washington Auxiliary Bishop Barry C. Knestout was the main celebrant of that Mass.

Cardinal Wuerl, in speaking with young people at the Verizon Center before the Mass, remarked: “Considering its freezing outside, the thousands of youth here (at the rally and Mass) shows how much value they place on human life.” 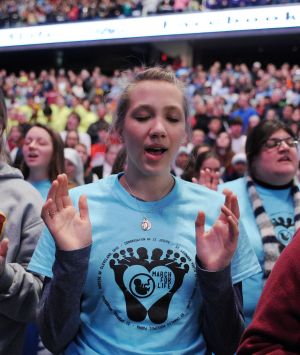 A young woman prays during a pro-life youth rally at the Verizon Center in Washington Jan. 22. (CNS photo/Leslie Kossoff)

“The basis of all respect is recognizing the right to life,” he said. “The young people here are the voices of life. They are the future.”

Among the “voices of life” at the rally and Mass was William Bolin, a member of St. Andrew Apostle Parish in Silver Spring, Md. He said the frigid temperatures would not deter young people who defend life.

“Snow or no snow, no matter what, we are pro-life, and it is crucial to show the world that youth are pro-life,” he said. “Despite all the obstacles, we will be here.”

The inclement weather did not keep a group of young pro-lifers from St. Martin of Tours Parish in Gaithersburg, Md., from attending the event.

“Because of the weather, our buses were canceled and we had to be creative to get here,” said Theresa Mondoa, a youth leader from the parish. “We carpooled because the kids are very committed to this and look forward to this day when they stand up for life.”

During his homily, Father Paris encouraged young people to be proud to “protect life (and) … stand up for our unborn brothers and sisters.”

“He (God) loves each unborn child and has a plan for their life, no matter how hard a situation they might come from.,” the priest said. “But before we can help anyone else believe this, we have to know this ourselves.”

Father Paris told youth not to be discouraged in sharing the pro-life message with others.

“How can we help the world around us understand? We are so young, so weak, the culture of death is so strong,” he said. “Say not, ‘I am too young.’ … The Holy Spirit will give us everything we need to make this happen.”

Cardinal Wuerl said the rally and Mass and participation in the March for Life offer ways “to renew our commitment to recognize and value the dignity of each human life. We recognize the warmth of your commitment in contrast to what is going on outside.”

Also during the Mass, Archbishop Carlo Maria Vigano, apostolic nuncio to the United States, read a message of support to the pro-lifers from Pope Francis. He said the pope was “most grateful to all those who take part in this outstanding public witness to the right to life.” Participants at the Verizon Center rally offered Pope Francis a thunderous standing ovation.

Father William Byrne, pastor of St. Peter Parish on Capitol Hill and the Archdiocese of Washington’ secretary for pastoral ministry and social concerns, opened the rally with a prayer.

“We come here to praise and worship God and to defend life,” he said. “Today is dedicated to the dignity of the human person.”

Young people in attendance said they were committed to seeing an end to abortion.

“I am motivated to see this terrible thing called abortion stopped,” said Kaycie Willard, a junior at Bishop McNamara High School in Forestville, Md., and a member of St. Joseph Parish in Beltsville, Md.

Susan Lea, a member of St. Francis of Assisi Parish in Derwood, Md., said that young people have an important role to play in defending life.

“This is the generation that is going to change the culture of death,” she told the Catholic Standard, Washington’s archdiocesan newspaper. “The message that everybody has a right to life is a message that young people will pass on to their peers.”

More than 400 people from the Diocese of Wichita, Kan., made a 24-hour bus journey through snow and ice to attend the youth rally, Mass and March for Life.

“Despite the chill, we have pledged to stand for life,” said Cheryl Greer, a member of the group. “This is our pilgrimage, and we offer it as penance, a prayer to end abortion.”

Cleopatre Thelus and Amande Cholodewitsch, college students from Cleveland, traveled to Washington by themselves. “I just wanted to be with my fellow Catholics and stand for life,” Thelus said.

Cholodewitsch noted that this was her fourth year attending the rally and Mass.

“I’m glad that it’s cold and there is snow – that is more suffering we can offer up to end abortion,” she said. “I keep coming back because I’m not going until Roe vs. Wade is gone.”

PREVIOUS: ‘No sacrifice too great’ for pro-life cause, says March for Life head