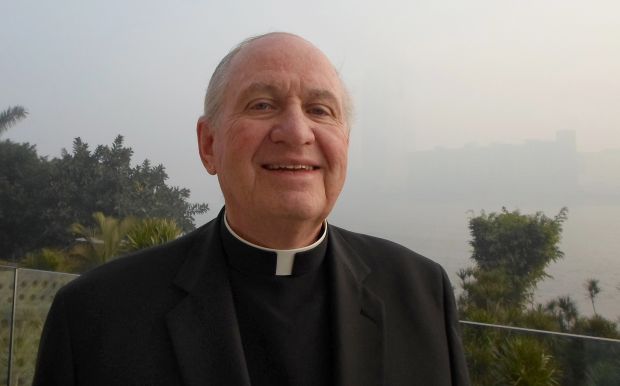 CAIRO (CNS) — A U.S. bishop on a fact-finding trip to Egypt said he would tell policymakers back home that “the investment of our country in human projects is really going to be the most beneficial of all.”

“Sixty-eight percent of the population here live under the poverty level, and what they want … is to be full participants in the economy, in a way that really represents the dignity of the family and the person,” Bishop Richard E. Pates of Des Moines, Iowa, told Catholic News Service in Cairo Jan. 10.

The projects included activities to create employment and promote tolerance between Egypt’s Muslim and Christian communities, as well as projects to increase educational facilities for the country’s most vulnerable, the bishop said.

He said he also visited a CRS program in Cairo that is helping Syrian refugees find housing and jobs.

“What (the humanitarian projects in Egypt) are really doing is building infrastructure of human capital that will be of benefit to friendship and peace going forward,” Bishop Pates said.

Egypt, the Arab world’s most populous country, has stumbled on its path to democracy since the popular uprising that toppled President Hosni Mubarak in 2011.

The tumultuous events have chased off tourists and investors, decimated the economy, and unleashed unprecedented violence in predominantly Sunni Muslim Egypt.

Some of the violence has targeted the nation’s Christian minority, thought to represent 10 percent of Egypt’s more than 85 million people.

At such times of instability, heightened fears, and growing poverty, U.S.-funded aid programs to Egypt are particularly critical, said Stephen Colecchi, director of the Office of International Justice and Peace of the U.S. Conference of Catholic Bishops, who was with Bishop Pates on the trip.

“One major issue that I see is that people are longing for stability,” Colecchi said.

PREVIOUS: Pope: Too many Christians have watered-down hope, lukewarm faith in God

NEXT: With few words, Pope Francis shows a new way to be pro-life