With few words, Pope Francis shows a new way to be pro-life 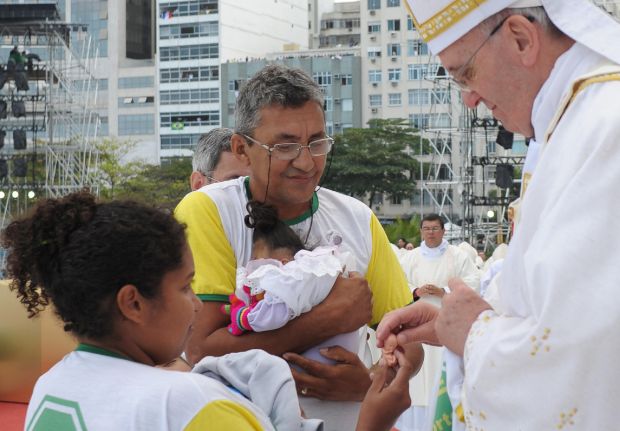 A couple wearing T-shirts with the message in Portuguese, "Stop Abortion," present a replica of a fetus to Pope Francis during the offertory at the closing Mass of World Youth Day in Rio de Janeiro in this July 28, 2013, file photo. (CNS photo/L'Osservatore Romano)

VATICAN CITY (CNS) — On the morning of Jan. 25, 2013, participants in the Washington, D.C., March for Life received an unexpected boost in the form of a Twitter message from Pope Benedict XVI.

“I join all those marching for life from afar, and pray that political leaders will protect the unborn and promote a culture of life,” the pope wrote on his account, @Pontifex.

This Jan. 22, when marchers on the Mall again protest the U.S. Supreme Court’s 1973 decision legalizing abortion, Pope Francis might very well follow Pope Benedict’s lead by tweeting his support. If he does, those words will be among the relatively few Pope Francis has devoted to the subject.

Pope Francis’ decision to talk less than his predecessors about abortion has puzzled and distressed some supporters of the pro-life movement. Yet the pope has made clear his commitment to the defense of unborn life and, thanks to his colossal popularity and gift for communicating across cultural divides, his pontificate could prove a boon to the pro-life cause in enormous and unprecedented ways.

The pope’s comparative reticence on abortion became evident to many observers a few months into his pontificate. At a June Vatican Mass dedicated to pro-life causes, an event that had been planned under Pope Benedict, Pope Francis surprised many when he delivered a homily without any reference to abortion, euthanasia or any other specific threat to life.

If any public figure today is capable of persuading large numbers of people outside the pro-life ranks to change, or at least open, their minds on the question, it is Pope Francis.

During his weeklong visit to Brazil the following month, the pope said nothing about the country’s moves to liberalize abortion (or its legalization of same-sex marriage), explaining afterward to reporters that the “church has already expressed itself perfectly on that.”

Among people used to regarding the pope as the world’s foremost advocate for the unborn, his silence was disquieting.

“Some people think that the Holy Father should talk more about abortion,” Cardinal Sean P. O’Malley of Boston said in a speech to the Knights of Columbus in August. But the cardinal added: “I think he speaks of love and mercy to give people the context for the church’s teaching on abortion.”

In a widely quoted interview published the following month, Pope Francis acknowledged that he had “not spoken much” about “issues related to abortion, gay marriage and the use of contraceptive methods,” and that he had been “reprimanded for that.”

The day after that interview was published, Pope Francis spoke out strongly on abortion for the first time since his election, denouncing it as a product of a “widespread mentality of profit, the ‘throwaway culture,’ which has today enslaved the hearts and minds of so many,” and stating that “every unborn child, though unjustly condemned to be aborted, has the face of the Lord.”

Just as strong were his words in the apostolic exhortation “Evangelii Gaudium” (“The Joy of the Gospel”), published in November, in which he affirmed the church’s “particular love and concern” for “unborn children, the most defenseless and innocent among us,” and quoted Blessed John Paul II’s statement that “every violation of the personal dignity of the human being cries out in vengeance to God.”

A key element in the pope’s words on abortion is the link he makes between protection of the unborn and the wider cause of social justice.

“Defense of unborn life is closely linked to the defense of each and every other human right,” Pope Francis wrote in the apostolic exhortation. “It involves the conviction that a human being is always sacred and inviolable, in any situation and at every stage of development. Human beings are ends in themselves and never a means of resolving other problems. Once this conviction disappears, so do solid and lasting foundations for the defense of human rights, which would always be subject to the passing whims of the powers that be.”

It is nothing new for a pope to draw such connections, as Pope Francis knows, since he made a similar point in September by quoting Pope Benedict: “If personal and social sensitivity in welcoming a new life is lost, other forms of welcome useful to social life will dry up.”

Yet such arguments are especially effective coming from Pope Francis, because his vehement criticisms of global capitalism, along with his conciliatory attitudes toward some of the more contentious issues between the church and contemporary secular culture, have earned him a reputation as less of a conservative than either Blessed John Paul or Pope Benedict.

“It is not ‘progressive’ to try to resolve problems by eliminating a human life,” Pope Francis has written. Nevertheless, many now see support for legalized abortion as a progressive position. The idea of a pope who is at once progressive and pro-life is thus bound to strike them as paradoxical.

And there is nothing better than a good paradox for getting someone to question his assumptions, even on a topic as polarizing and long-debated as abortion. If any public figure today is capable of persuading large numbers of people outside the pro-life ranks to change, or at least open, their minds on the question, it is Pope Francis.

There is another way, at least as important, in which Pope Francis acts a witness for life: the countless images of him embracing, kissing and caressing people with crippling or disfiguring injuries or diseases. No verbal argument could more powerfully refute the eugenic mentality behind the culture of abortion than the sight of a pope passionately celebrating human lives that many would insist are not worth keeping.

NEXT: Pope names 19 new cardinals, including six from Latin America