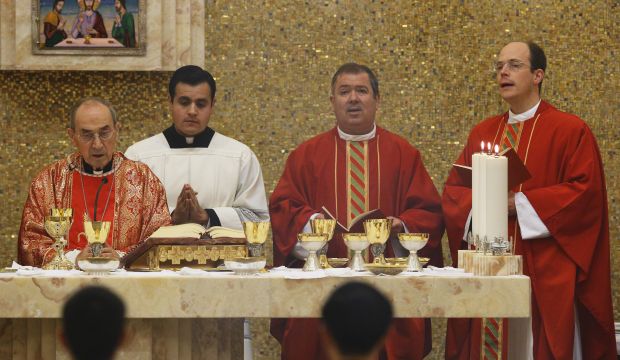 ROME (CNS) — As the Legionaries of Christ started their extraordinary general chapter, the cardinal overseeing the troubled congregation said scandal had taken a toll on its finances, but that members had made progress in overcoming the moral and administrative legacy of their disgraced founder.

Cardinal Velasio De Paolis, the papal delegate to the Legionaries, spoke in an interview with Vatican Radio broadcast Jan. 9, the chapter’s first working day. The cardinal had formally opened the gathering by concelebrating Mass with members of the congregation the previous evening.

The chapter, expected to last six weeks, is the culmination of a reform process that began with a Vatican-ordered apostolic visitation in 2009. That investigation was prompted by revelations that the congregation’s founder, Father Marcial Maciel Degollado, had fathered at least one illegitimate child and sexually abused children.

In 2010, the Vatican announced that Father Maciel, who died in 2008, had been guilty of “seriously and objectively immoral behavior” and “real crimes,” and had lived a “life devoid of scruples and of genuine religious meaning.” That same year, Pope Benedict XVI named Cardinal De Paolis to supervise the Legionaries’ reform.

The 61 Legionary priests from 11 countries now gathered in Rome are supposed to select new leaders and approve a revised constitution, which has not yet been released to the press.

The reference seemed to indicate that the revised constitution would permit Legionaries to choose their own confessors, removing a requirement that they confess only to priests chosen by superiors.

The cardinal said drafters of the new constitution had found it necessary to “reaffirm that authority is not arbitrary but must operate within a council.”

Father Maciel “would often act as he pleased, without making use of his council,” Cardinal De Paolis said. “So the problem was precisely helping the superiors to learn a form of government in which superiors are transparent, observant of the church’s norms and respectful of her rules.”

The cardinal justified his initial decision not to dismiss Legionary officials who were in place when he took over with his advisers in 2010, “because those of us who came in could not operate and govern without knowing the situation.” But he emphasized that the Legionary officials “could not decide anything unless we were present.”

“We were convinced that, once the Legion was equipped with worthy superiors, the journey would be on its way and could make progress,” the cardinal said. “I think that has been the case.”

In 2012, Cardinal De Paolis invited Legionary Father Alvaro Corcuera, who had succeeded Father Maciel as the congregation’s general director in 2005, to take a sabbatical until the general chapter, for the sake of Father Corcuera’s health.

The cardinal said his first task in reform had been confronting the Legionaries’ rank and file with revelations about Father Maciel and their implications for the congregation.

Some members accepted that the “government of the institute was tainted,” he said; but “there was another group that could not grasp the news,” and insisted that the Legionaries’ virtues “had prevented them from falling into the defects of other religious institutes.”

“They had fallen into a trap far more dangerous,” the cardinal said, “that of the founder himself.”

Cardinal De Paolis said the Legionaries, well known as effective fundraisers, “are not as rich as you might think. Their economic situation had deteriorated, both because of the global financial crisis” and “because the loss of reputation caused a loss of students at their schools, and therefore also in financial revenue.”

Acknowledging the challenge of identifying the congregation’s “spiritual patrimony” in light of its founder’s disgrace, the cardinal said the Legionaries’ charism is the same as that of their affiliated lay movement, Regnum Christi, which he described as “not touched” by the scandals associated with Father Maciel.

The movement as a whole, Cardinal De Paolis said, practices a “spirituality typical of the kingship of Christ — Christ’s kingship, not from a triumphalist point of view, but from the point of view of Jesus, who triumphs from the cross — with a very strong devotion to the Eucharist and to Mary,” in an apostolate focusing on “work in universities and higher education.”

Despite their troubles, the Legionaries remain an influential presence at the Vatican, among other ways through Rome’s Pontifical Regina Apostolorum University, which they run.

In November, Pope Francis, who must approve the Legionaries’ new constitution before it takes effect, ordained Bishop Fernando Vergez, a member of the congregation, three months after naming him to the second-highest post in the office governing Vatican City.

NEXT: Malaysian official: Investigation of priest for sedition will continue