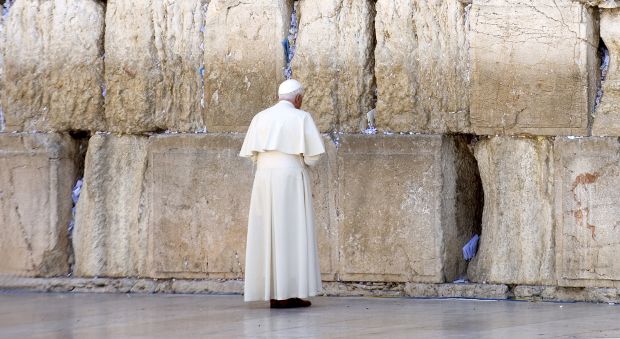 AMMAN, Jordan (CNS) — Latin Patriarch Fouad Twal of Jerusalem welcomed the announcement of Pope Francis’ May visit to the Holy Land and said he hopes the pilgrimage will be a “cry for peace,” particularly for Palestinians, Israelis, Syrians and others beset by conflict.

Pope Francis announced his first trip as pontiff to the Holy Land, May 24-26, during his weekly blessing in Vatican City Jan. 5. His visit to Jordan, Israel and the Palestinian territories is planned to mark the 50th anniversary of the historic visit by Pope Paul VI to the Holy Land in 1964.

Pope Francis is expected to celebrate Masses in the West Bank town of Bethlehem, Jerusalem, and the Jordanian capital, Amman, where he will begin his trip.

Speaking to reporters in Amman Jan. 5, Patriarch Twal underscored that Arab Christians are badly in need of the pope’s encouragement as their numbers continue to decrease due to violence and economic hardship.

“How great is his concern for us. And our presence, I think is one of the aspects he will mention in his speech to ask us to be courageous and to stay,” the Jordanian-born patriarch said.

Christians throughout the Middle East represent the oldest such community in the world. But in their ancient homelands of Iraq, Syria, Egypt, Lebanon and the Palestinian territories, they have increasingly become targets of intimidation and killing in the midst of civil unrest and war.

“The visit is intended to consolidate the good relations that bind the Muslims and Christians of these Arab countries since ancient times, as well as contribute to intensifying calls for mutual respect and redoubling efforts to respect for religious pluralism in an atmosphere of love and cooperation,” the patriarch said.

“We need the pope to bring peace to Jerusalem,” Mary Yadi, a Jerusalem native and parishioner at St. Joseph’s Church in Amman, expressed as her hope for the visit.

“Our world is engulfed in war and it desperately needs peace. More prayers must be offered to see something positive happen,” she said.

Fellow parishioner, Sameh Girguis, an Egyptian Orthodox, said he wants the pope to “bring God’s love and stability to Arab countries,” writhing in the aftermath of the Arab Spring upheavals that saw long-time rulers toppled.

Another aspect of the papal pilgrimage aims to strengthen efforts initiated by Pope Paul VI to encourage greater unity between the Western and Eastern churches. Pope Francis will meet Ecumenical Patriarch Bartholomew of Constantinople, considered first among equals by Orthodox bishops, and the three Catholic patriarchs of Jerusalem.

He is expected as well to build on reconciliation efforts by moderate Muslims, such as Jordan’s King Abdullah II, to foster better relations between Muslims and Christians. Immediately after his arrival in Jordan May 24, Pope Francis will meet privately with the king, who visited the pontiff with his wife, Queen Rania, in August at the Vatican.

Pope Francis also will hold talks with Jordanian religious and political leaders and celebrate an open-air Mass in an Amman stadium.

Later that evening, the pontiff will travel to the site where it is believed that Jesus was baptized and the “place chosen by Jesus to begin his mission,” Archbishop Giorgio Lingua, apostolic nuncio to Jordan and Iraq, told the news conference.

The place has been “significantly chosen for the pope to share dinner with the ‘least,’ that is, with those living in peculiar conditions of suffering and uncertainty,” he said.

Pope Francis, who is well-known for his simplicity and humility in the vein of his namesake, St. Francis, will dine with Syrian refugees, the handicapped and the impoverished at the sacred site along the banks of the Jordan River.

Archbishop Lingua said the pontiff, much like Pope Paul, wanted to visit Damascus, Syria, to walk in the footsteps of St. Paul, but he, too, will be able “only in spirit, by heart and mind, to share the suffering of that country.”

Father Rifat Bader of the Catholic Media Center in Amman said Pope Francis will travel to Bethlehem by helicopter from Amman May 25. He will celebrate Mass in Bethlehem’s Manger Square and will meet Israeli President Shimon Peres.

Patriarch Twal expressed hope that Christians from Gaza and Galilee will also be allowed to participate in the Manger Square Mass.

Samir Karadsheh, an aviation consultant visiting Amman from the Immaculate Heart of Mary Church in Grand Rapids, Mich., said he intends to return to Jordan for the pope’s May visit just as he did for that of Pope Benedict XVI in 2009.

“I won’t ask anything of the pope,” he said. “Instead, I want to say, ‘Thank you for bringing faith back to everyone.'”

American Jesuit Father Alfred J. Hicks, who has served in the Middle East for decades, initially in Iraq and now Jordan, expressed a similar sentiment.

“He’s been sent by the Spirit to reform the church. We’re very proud of what the pope is trying to do, whether in Rome or here,” he said.