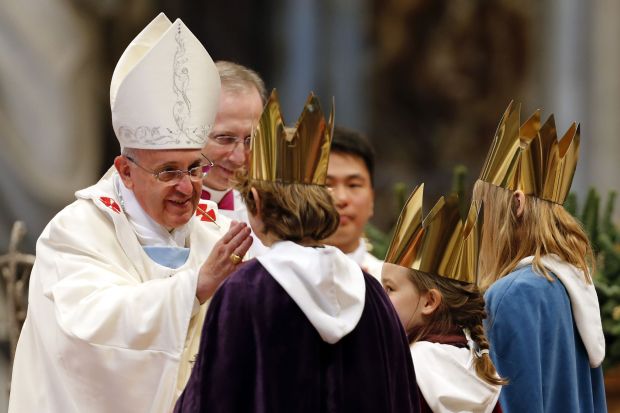 Children bring Pope Francis a chalice during the offertory as he celebrates Mass in the Vatican's St. Peter's Basilica on the feast of Mary, Mother of God, Jan. 1. (CNS photo/Giampiero Sposito, Reuters)

VATICAN CITY (CNS) — Welcoming in a new year, Pope Francis said it was time to stop provoking and ignoring violence, tragedy and conflict in the world, and begin building peace at home.

“Justice and peace at home, among us — you begin at home and then you move on to all of humanity. But we have to start at home,” he said Jan. 1, which the church marks as the feast of Mary, Mother of God and as World Peace Day.

Speaking to tens of thousands of pilgrims gathered in St. Peter’s Square for the first noon Angelus of 2014, the pope referred to his peace day message, which he said called for building a world where everyone “respects each other, accepts others in their diversity and takes care of each and every one.”

People must not remain “indifferent and immobile” in the face of violence and injustice, but commit themselves to “build a truly more just and caring society,” he said.

The pope referred to a letter he had received the day before from a man struggling to understand why there were still so many tragedies and wars.

The pope said he wanted to ask the same question: “What is happening in people’s hearts? What is going on in the heart of humanity” that leads to violence?

“It’s time to stop,” Pope Francis said. “It will do us good to stop taking this path of violence.”

May God “help all of us walk the path of justice and peace with greater determination,” he said, and the Holy Spirit break down the obstinacy and barriers people construct between each other.

The pope also prayed to Mary that the “Gospel of fraternity” might “speak to every conscience and knock down the walls that hinder enemies from recognizing each other as brothers and sisters.”

Earlier in the day, the pope celebrated Mass in St. Peter’s Basilica, which was decorated with white flowers, evergreens, gold trim and poinsettias. Two girls and one boy, wearing long capes and shiny gold paper crowns in memory of the magi who traveled to Bethlehem, brought the offertory gifts to the pope.

Prayers for peace were offered in five languages; the Spanish version asked that God “bless all women and all mothers, called to bring forth, to guard and to promote life.”

In his homily, the pope said Mary, the Mother of God, became the mother of all humanity when Jesus, dying on the cross, gave her to the world.

When she lost her divine son, “her sorrowing heart was enlarged to make room for all men and women, whether good or bad, and she loves them as she loved Jesus,” he said.

Even before the church officially defined Mary as God’s mother in the fifth century, the faithful had already acknowledged her divine maternity and called for its recognition, the pope said, noting the case as an example of the “‘sensus fidei’ (sense of the faith) of holy people, the faithful of God, who, in their unity, are never ever wrong.”

Mary is a source of hope and true joy and continually strengthens people in their faith, vocation and mission, he said. “By her example of humility and openness to God’s will she helps us to transmit our faith in a joyful proclamation of the Gospel to all, without reservation.”

He asked the faithful to entrust with Mary their journey of faith, their hopes and needs as well as “the needs of the whole world, especially of those who hunger and thirst for justice, peace and God.”

In his homily, Pope Francis also mentioned the Marian icon “Salus Populi Romani” (health of the Roman people) in Rome’s Basilica of St. Mary Major, which he said was the first Marian shrine in the West where the image of the Mother of God — the “Theotokos” — was venerated.

According to Vatican Radio, the pope visited St. Mary Major Dec. 31 to pray at length before the icon, repeating a pilgrimage he made on the first morning of his pontificate in March and on other subsequent occasions.

NEXT: Churches inundated as violence continues in Central African Republic