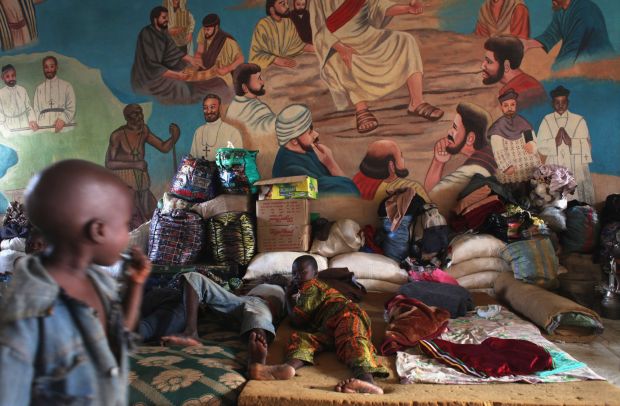 Displaced families rest next to their personal belongings as they take refugee from religious violence in a Catholic church in Bossangao, Central African Republic, Dec. 29. (CNS photo/Andreea Campeanu, Reuters)

OXFORD, England (CNS) — Church leaders in the Central African Republic report an increasing humanitarian crisis and warn that international forces, which have been in their country a month, had not secured law and order.

“The situation is very chaotic and worsening all the time,” said Msgr. Cyriaque Gbate Doumalo, secretary-general of the Catholic bishops’ conference.

“All our churches and parishes are inundated with displaced people, and some were unable to celebrate Christmas as a result. Whole districts of Bangui are deserted, while even those in the relative safety of Catholic centers are living in total fear,” he told Catholic News Service.

Clashes continued in the capital between rival Christian and Muslim armed groups, despite the Dec. 8 arrival of 1,600 French paratroopers under a U.N. mandate.

Msgr. Doumalo told CNS Jan. 2 that Bangui Archbishop Dieudonne Nzapalainga had paid a morning visit to Bangui airport, where the church’s Caritas charity was helping distribute food and shelter to more than 100,000 refugees.

However, he added that 12,000 more displaced civilians had sought refuge in Bangui’s major seminary, while the bishops’ conference secretariat was sheltering 600 people, half of them children. He said many children had been abandoned when their parents were killed or fled and were now without food and clothing and “at the mercy of armed groups.”

In a Dec. 30 report, UNICEF said attacks on children in Bangui had “sunk to a new vicious low,” adding that two had been beheaded in the violence.

“More and more children are being recruited into armed groups, and they are also being directly targeted in atrocious revenge attacks,” Souleymane Diabate, UNICEF’s representative to Central African Republic, confirmed in the report.

“Targeted attacks against children are a violation of international humanitarian and human rights law and must stop immediately. Concrete action is needed now to prevent violence against children,” the report said.

Bishop Nestor-Desire Nongo Aziagbia of Bossangoa said conditions in the western provinces had “marginally improved” but cautioned that peace initiatives were being disrupted by “a few mostly young individuals.” In a Christmas message, the bishop said the number of displaced seeking refuge at his Bossangoa residence had risen to almost 50,000.

“Both the Muslim and Christian communities are fearful of each other,” Bishop Nongo told CNS by telephone Jan. 2. “But the two sides are at least living separately and can ensure their security more easily. In Bangui, the various communities are mixed together and heavily infiltrated by fighters from both sides.”

French and African troops have attempted to disarm militants from the rebel Seleka movement, after communal fighting in Bangui during December left around 1,000 dead, and 370,000, half the city’s population, displaced. Around 785,000 people have been displaced within the country since violence erupted in December 2012, according to the U.N.

Seleka is composed partly of Arab-speaking Islamists from neighboring Chad and Sudan, who suspended the constitution after ousting President Francois Bozize last March.

Bishop Nongo said some Bossangoa inhabitants had obtained food from local farms, but added that Christian women were still being routinely threatened and robbed by “armed thugs” when visiting shops in Muslim areas.

“We need a bigger peacekeeping mission here; the present force is plainly unable to cope or play an effective role,” the bishop told CNS. “Without this, things are certain to get difficult. Unless the huge quantities of guns now in popular circulation are collected, people will continue killing each other.”

In mid-November, Bishop Nongo traveled to Washington to testify before the House Subcommittee on Africa, Global Health, Global Human Rights and International Organizations, and he told CNS he was counting on the U.S. government to back the extension of a December U.N. resolution authorizing peacekeeping forces.

Bishop Nongo said the bishops’ conference would issue a fresh peace appeal in mid-January, although most members would be unable to attend a planned Jan. 6-12 plenary in Bangui.

NEXT: Sub-Saharan refugees in Cairo find challenges blending with society