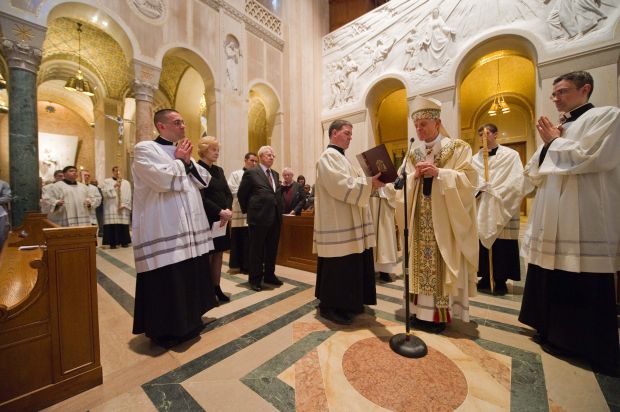 Cardinal Donald W. Wuerl of Washington gives a blessing during the dedication of the South Gallery Vault Mosaic at the Basilica of the National Shrine of the Immaculate Conception in Washington Feb. 2. (CNS photo/Matthew Barrick)

WASHINGTON (CNS) — Cardinal Donald W. Wuerl of Washington Feb. 2 dedicated a newly installed mosaic at the Basilica of the National Shrine of the Immaculate Conception and the work is the “the second to the last step” in completing the artistic vision of the shrine’s original designers.

A news release said installation of the South Gallery Vault Mosaic, above the shrine’s M.P. Moller pipe organ, leaves just one area in the Great Upper Church unadorned — the Trinity Dome, which is the interior of the blue dome that is one of the exterior hallmarks of the shrine.

The mosaic dedicated by the cardinal, who is chairman of the shrine’s board of trustees, was fabricated by Travisanutto of Spilimbergo, Italy, using a design by the Rambusch Co. of New York and New Jersey. Miotto Mosaics of Carmel, N.Y., and Rugo Stone of Lorton, Va., installed the work.

A simple cross is the mosaic’s primary feature.

“It is this mosaic and cross that leads one visually and purposefully,” the release said, “to the succession of mosaics through the nave of the basilica and thematically through salvation history: ‘The Incarnation,’ ‘The Redemption,’ ‘The Trinity,’ ‘The Descent of the Holy Spirit,’ ‘The Triumph of the Lamb,’ finally culminating with ‘Christ in Majesty.'”

The national shrine is the largest Catholic church in North America and one of the 10 largest churches in the world. Designated by the U.S. bishops as a national place of prayer and pilgrimage, it receives 1 million visitors annually.

Initial work on the shrine, named a basilica in 1990, began in the early 1900s. Although the cornerstone was laid in 1920, the Great Depression and World War II delayed completion of its upper church until 1959.

Since that time, the national shrine has always remained a work in progress with the continual additions of stained-glass windows, mosaics, statues, dome work and chapels.

More than 70 chapels and oratories — which are similar to chapels but do not have altars — are located throughout the shrine. Periodically, new ones are dedicated by various ethnic groups and religious communities. These chapels relate to the shrines of the regions they represent such as Our Mother of Africa, Our Lady of Czestochowa and Our Lady of Guadalupe, to name just a few.

The Rambusch Co., a fourth-generation family business founded in 1898, has had many projects over the years in synagogues, state capitols, government buildings, museums across the country and Washington’s national shrine.

In 1931, the company designed and installed its first chapel, which was dedicated to Our Lady of Lourdes. Since then, Rambusch has designed several other shrine chapels, many of the stained-glass windows and much of the lighting. The newly installed mosaic is the latest the firm has designed and overseen for the shrine’s domes.

NEXT: ‘Troublemaker’ pope reshaping church, but drawing some skepticism