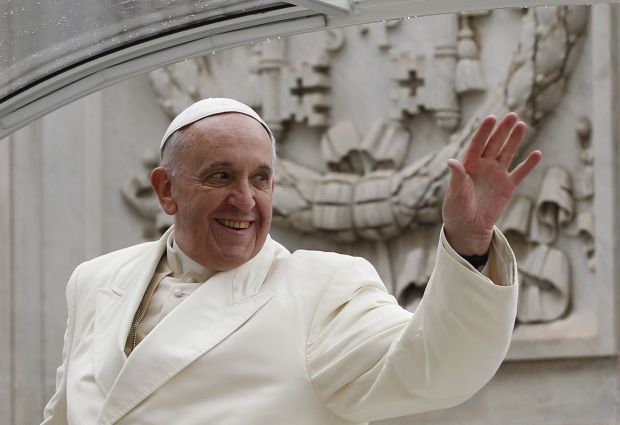 Pope Francis waves as he leaves his general audience in St. Peter's Square at the Vatican Feb. 5. (CNS photo/Paul Haring)

WASHINGTON (CNS) — As early on as it is for the pontificate of Pope Francis, his statements and actions already have given guidance for how simple changes can improve the world, said panelists at Georgetown University.

In the latest in a series of conversations hosted by the Initiative on Catholic Social Thought and Public Life Feb. 3, two journalists and an expert on church management considered the effect of the “Francis factor” on politics and public policy.

Much of the discussion built upon an observation from the previous session of the initiative, in December, when columnist Michael Gerson, an evangelical who was a speechwriter and adviser to President George W. Bush, called Pope Francis “a troublemaker with a plan.”

John Carr, moderator and the initiative’s director, mentioned some of the pope’s recent actions that might suit the “troublemaker” description, including telling the 19 priests and bishops he named cardinals in January to “leave the entourage at home,” and not to plan big parties to celebrate.

Carr previously served as secretary of the Department of Justice, Peace and Human Development at the U.S. Conference of Catholic Bishops.

Kerry Robinson, executive director of the National Leadership Roundtable on Church Management, said the pope is a troublemaker “for those who want nothing to change.” She later said one type of change she hopes is possible under Pope Francis is to expand and elevate the role of women. She said her organization has been encouraging staff of Vatican offices to identify leadership roles in the curia that may be held by women.

There are many high level posts “that don’t violate canon law or doctrine” which could raise the profile of women in the church, and address one area of harsh criticism about the nature of the institution, Robinson said.

New York Times columnist Ross Douthat, author of books including “Bad Religion: How We Became a Nation of Heretics,” said Pope Francis “is obviously a troublemaker.” Less than a year into the pontificate, “he has revolutionized the papacy in ways I would not have thought possible a year ago.”

More amazingly, said Douthat, is that the pope has accomplished this without major doctrinal changes, and primarily with symbolic measures.

Douthat, who has written several columns expressing skepticism about the level of adulation Pope Francis has received, suggested that if Pope Benedict XVI had done the same things, news media would not have covered them in the same way.

The remaining panelist, John Allen, former Vatican correspondent for the National Catholic Reporter and now associate editor for the Boston Globe, said one reason for differences in how Popes Francis and Benedict have been covered by news media is that by the time he was elected pope, “the narrative was already in place,” for the former Cardinal Joseph Ratzinger. As longtime head of the Congregation for the Doctrine of the Faith, Pope Benedict’s image as the stern, doctrinaire German, “the Rottweiler,” wasn’t easily shaken.

But as a little-known archbishop from Argentina who had never worked at the Vatican, Cardinal Jorge Mario Bergoglio presented a blank slate, Allen said. And his many actions that contrast with images of a distant, formal pope have challenged aspects of the status quo.

Allen said that in choosing Cardinal Bergoglio, the conclave last March was “the most anti-establishment papal election in a century.” He said the choice represented not a decision to change doctrine, but to change “management style,” in a church that has been reeling from high level crises including the handling of sexual abuse cases, banking irregularities and leaks of sensitive information by Pope Benedict’s butler.

Allen said that based on conversations he has had with about a third of the papal electors, he thinks most were not surprised that Pope Francis turned out to be a strong leader with an emphasis on simplicity. Some, however, expected him to be more politically conservative, based upon some of his actions in Argentina during its “dirty war” in the 1970s and in opposing same-sex marriage legislation there.

There are likely some cardinals “who would admit some things he’s done make them nervous,” Allen said. But in general, they also likely appreciate that the enormous popularity of Pope Francis makes life easier for them, as people want to know more about the pope.

Each of the participants commented about the pope’s actions defining him as a Christian in the most challenging, personal understanding of the word.

Robinson said his call in September for a worldwide day of prayer and fasting for peace in Syria struck a chord across faith denominations.

“Most of the world cares deeply about the things the pope is talking about,” she said.

Robinson said that the most important thing Pope Francis has done “is to call us to personal conversion.” Whether his is a short or lengthy pontificate, she said, the kind of conversion in the world he seeks “starts now, with us.”

Douthat said he remains skeptical about the institutional impact Pope Francis may have in the long term.

“Pope John Paul II gave the impression of dragging the church into the modern world,” Douthat said, “but the apparatus stayed outdated.”

If people learn anything from the words and example of Pope Francis, Allen said he would like people within the church to stop running everything he says “through the meat grinder,” parsing phrases for meanings that can be used to achieve a political gain.

The Initiative on Catholic Social Thought and Public Life, established last year and based at Georgetown, is intended to promote understanding and dialogue around Catholic social thought.

In addition to the ongoing panel discussions, Carr said the next effort of the initiative seeks young Catholics involved in public policy to work on making connections between faith, Catholic social teaching and their professional lives. Those who want to get involved or want to recommend a young professional to participate should send an email to: catholicsocialthought@georgetown.edu.

NEXT: Senate OKs farm bill; Obama pledges to sign it