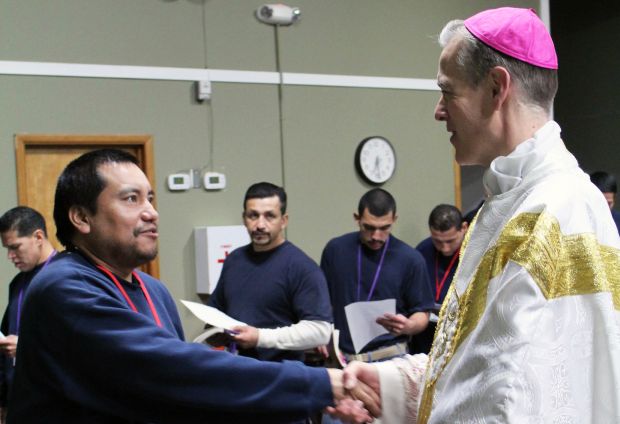 NEWARK, N.J. (CNS) — Leaders of Christian Churches Together in the U.S.A., of which the U.S. Conference of Catholic Bishops is a member, issued a pledge to engage the American public on the issue of mass incarceration in the United States.

“The church in the United States has a moral and ethical imperative to protect human dignity and must address the problem of mass incarceration in our nation,” the coalition said in a statement issued at the end of its Feb. 4-7 meeting in Newark, during which religious leaders heard from experts in the field — including a New York Baptist minister who himself had been jailed before entering the ministry.

“We recognize that the legacy of the dehumanization of people of color has borne lasting effects in current-day society,” citing slavery and Jim Crow laws as examples of “subjugation” until civil rights laws passed nearly 50 years ago tried to right it. “We see the vestiges of these systems of human control in America’s current system of mass incarceration.”

Christian Churches Together added, “These systems are not only affecting African-Americans. They are now impacting all people of color, the poor, the marginalized, and the immigrant in the United States. Latinos and other immigrants, in particular, are experiencing the brunt of increased detention rates in the midst of their struggle for immigration reform.”

“While there is a role for prisons to address violent offenses, we recognize that our nation’s justice system has lost the hope embodied by its historic vision to ‘correct’ and restore broken people back to society. As followers of Jesus Christ, we believe in the redemption and reconciliation of all things, rather than retribution. This includes the prisoner and broken systems. This is the essence of the Gospel.”

— One in three African-American men, and one in six Latino men, are likely to be imprisoned at some point in their life, compared to one in 17 white men.

“Mass incarceration must stop,” Christian Churches Together said. “We are challenging ourselves together with government and the nation to seize this moment when multiple forces are aligning toward positive action to correct the injustices within our ‘justice’ system.”

The USCCB has been participating in Christian Churches Together since 2004. Other faith groups involved with the organization include historic Protestant, evangelical/Pentecostal, Orthodox, and historic black churches.