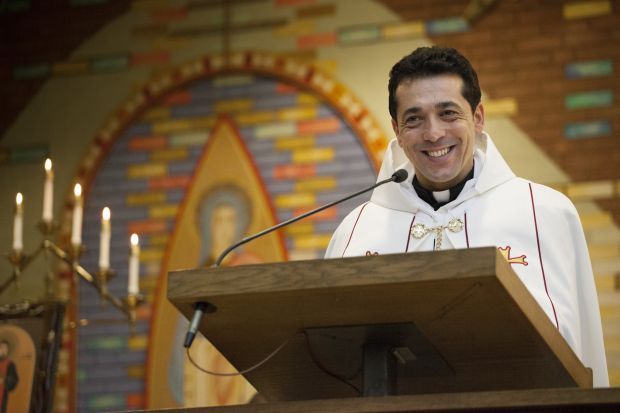 Father Wissam Akiki speaks to the congregation after being ordained to the priesthood Feb. 27 at St. Raymond's Maronite Cathedral in St. Louis. Father Akiki, who has a wife and daughter, is the first married man to be ordained a priest for the U.S. Maronite Catholic Church. (CNS photo/Lisa Johnston, St. Louis Review)

ST. LOUIS (CNS) — Father Wissam Akiki is the first married man to be ordained a priest for the U.S. Maronite Catholic Church.

On Feb. 27, with permission granted by Pope Francis, Bishop A. Elias Zaidan of the U.S. Maronite Eparchy of Our Lady of Lebanon ordained the married deacon at St. Raymond’s Maronite Cathedral in St. Louis.

“It is a blessing and an honor to officiate over any ordination, and especially so at this historic ordination of the first married man to enter the priesthood in the United States of America for the Maronite Church,” Bishop Zaidan said in a statement issued before the ordination.

“I join our Holy Father, our Maronite patriarch, my fellow bishops and priests throughout the world in our prayer for priestly vocations,” he said.

Father Akiki studied for the priesthood at Holy Spirit University in Lebanon, Our Lady of Lebanon Maronite Seminary in Washington and the Aquinas Institute of Theology in St. Louis. He is married to Manal Kassab and they have a daughter, Perla.

These Eastern churches have an ancient tradition of allowing married men to become priests, although since the 1920s the practice generally has not been permitted in the United States, according to a press release from St. Raymond’s Cathedral.

St. Raymond’s statement also noted that having a married priesthood should in no way “detract from the value that the church finds in the vocation to celibacy. The celibate priesthood continues to be highly esteemed. We need to always keep in mind that it is a vocation to be married and a vocation to be a priest.”

In the Latin-rite Catholic Church, including in the United States, celibate priesthood has been the normal practice, explained Msgr. Michael Witt, professor of church history at Kenrick-Glennon Seminary. The Council of Trent, he said, realized that celibacy within the priesthood was a church discipline.

Eastern Catholic churches traditionally have dealt with the issue of married priests in a different way.

In 692 during the Council of Constantinople, also known as the Council in Trullo, Msgr. Witt said, the council fathers “acknowledged the legitimacy of a married clergy, but it is highly restricted.”

“A (married) priest is not allowed to be a bishop — in fact most bishops (in the Eastern Church) are monks and they must be celibate. And if you’re ordained a priest and you’re not married, then you’re expected to remain celibate the rest of your life,” he explained.

“The important thing to remember about celibacy in Roman Church is that it is a covenantal relationship between the individual priest and the church itself,” Msgr. Witt said. “The priest is standing in for Christ — the ‘alter Christus’ — and he stands in for Christ not only when he is performing the sacraments, but in a much broader sense than that. We are really married to the church in a unique kind of way.”

NEXT: Judge: Any state law involving marriage must comply with Constitution