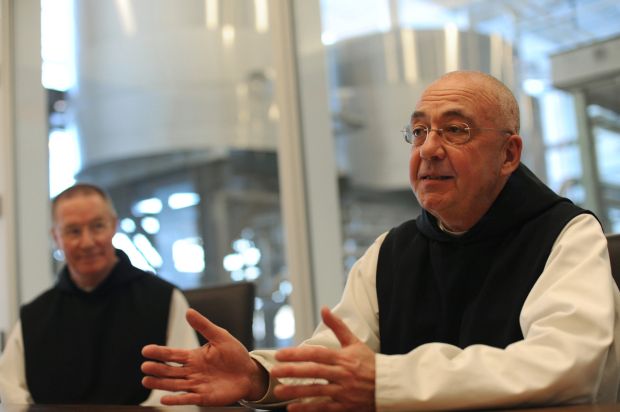 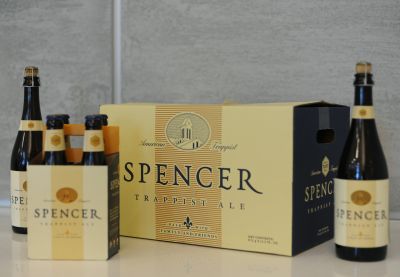 That was the assessment of Chris Pierce, assistant beer manager at Julio’s Liquors in Westborough. He was talking about Spencer Trappist Ale, brewed at the Spencer Brewery at St. Joseph’s Abbey in Spencer.

The ale went on sale for the first time in January at Julio’s outlets in Massachusetts. Until now, Trappist ale was brewed only in Europe.

“We had a very good sale,” Pierce said. The store sold 55 cases, each containing six four-packs. That’s 1,320 bottles. They were gone in two hours.

Since then, he said, the store has gotten nonstop calls asking when more of the ale would be available.

At Spencer Country Spirits, owner Alan Letendre said there has been such a demand that, after he sold out his 50 cases, he started a list for people who come in to buy the ale.

He said the day the delivery truck came to his store, he took a picture of the delivery men wheeling in the cases and posted the picture on Facebook. The beer arrived at noon. All 50 cases — 1,200 bottles — were gone by 9 p.m.

“I haven’t had a chance to try some myself,” he told The Catholic Free Press, Worcester’s diocesan newspaper. “This was a response like I’ve never seen before, and I’ve been in the business since 1990.”

Father Isaac Keeley, brewery director, said there were long and animated discussions about whether the abbey should start a brewery.

The source of the new ale that is causing the excitement is a new building on the grounds of St. Joseph’s Abbey. It is a long, stainless steel, silver-gray, 36,000-square-foot, state-of-the-art brewery located in a section of the 2,000-acre property that is closed to the public. It looks nothing like the other buildings at St. Joseph’s Abbey, which are stone and wood, for the most part.

According to the International Trappist Association, to become an authentic Trappist product, the ale must be brewed inside the walls of a Trappist monastery by the monks or under their supervision, must be of secondary importance within the monastery and should witness to the business practices proper to a monastic life. The brewery is not intended to make a profit. Income covers living expenses of the monks and maintenance of the buildings and grounds. Whatever remains is donated to charity and to help people in need.

Spencer Trappist Ale was awarded the designation “Authentic Trappist Product” by the International Trappist Association Dec. 10, 2013, according to the brewery’s website.

The Trappists at St. Joseph’s Abbey make a wide assortment of jams and jellies, which they have sold for nearly 60 years. Under the Trappists’ direction, the Holy Rood Guild on the grounds also makes and sells religious vestments. These enterprises produce income to support the brothers and pay the bills.

But jam- and jelly-making is labor intensive. The 63 brothers and priests at the abbey aren’t getting any younger and it was felt that another source of income was needed.

Father Isaac Keeley, brewery director, said there were long and animated discussions about whether the abbey should start a brewery. They hired a consultant and came up with a detailed business plan. Finally, they decided to make Trappist ale. Several of them, including Father Keeley, traveled to Belgium to consult with the Trappists there.

The Belgian Trappists at first were less than enthused by the idea of a Trappist ale being made in the United States. They weren’t sure the new ale would be up to Trappist standards. But they asked that the Spencer Brewery produce just one product. They also suggested, Father Keeley said, that “you buy the very best equipment you can find and maybe a bit more.”

The brewery, costing several million dollars, was financed by some of the Trappists’ funds and bank loans. It was named the Spencer Brewery because, as Father Dominic Whebee, prior, said, the Trappist tradition is to name the facility after the town where it is located.

The Trappists at St. Joseph Abbey researched the craft of beer-making and sent two Trappist brothers to Belgium — one for six months, the other for seven — to learn how ale is made in monasteries there. The Spencer brewery uses water from wells on the abbey grounds, malt barley from the Midwest, Canada and upstate New York, and hops from the West Coast.

Some of that could change. In a field near the brewery the Trappists planted 10 acres of barley last September. It should be ready for harvest in July or August, Father Isaac said, and could be used in the brewery.

To start the brewing process, grain, kept in a silo outside the brewery, is pumped into one of three huge stainless steel kettles and mixed with water. At various stages the grain is removed, hops are added, the liquid is cooled, then piped into fermenting vessels where the yeast — called “family yeast” because it is like the yeast used by the European Trappists — is added.

When it is ready it flows to the bottling area where the bottles are filled and capped and put into four-packs. They are put in cardboard cases, six four-packs to a case. The cases are put on wood pallets, wrapped in plastic and stored in a temperature-controlled warehouse. The entire process is automated on an assembly line requiring human eyes but not human hands.

It takes six hours to brew the ale, two weeks for it to ferment, and three weeks in the warehouse to allow the yeast to work.

The grain, filtered out in the early brewing stages, goes to dairy farmers who feed it to their cattle.

Father Isaac said there are 15 monks working in the brewery. Supervising the brewing operation is Hubert deHalleux, a Belgian who has a master’s degree in brewing science. He and his wife will be here for about two years, training the Trappists. There also are several Italian and German experts working out any problems in the bottling plant.

The monks at the abbey will be able to have the ale at Sunday dinner and on special holidays, Father Whebee said. They were recently introduced to it at dinner.

Clew is contributing editor at The Catholic Free Press, newspaper of the Diocese of Worcester. 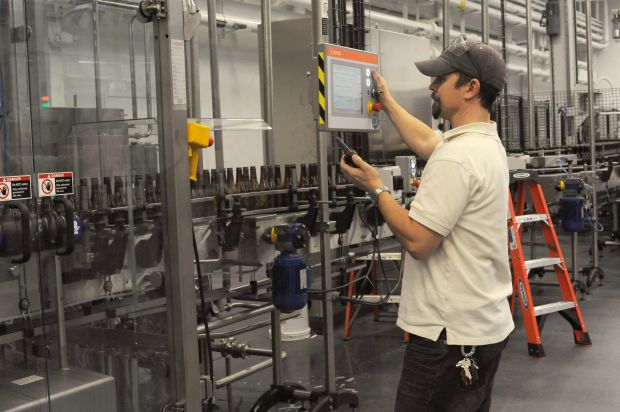 NEXT: Miami Catholic hopes app will help people ‘fall in love with the Mass’