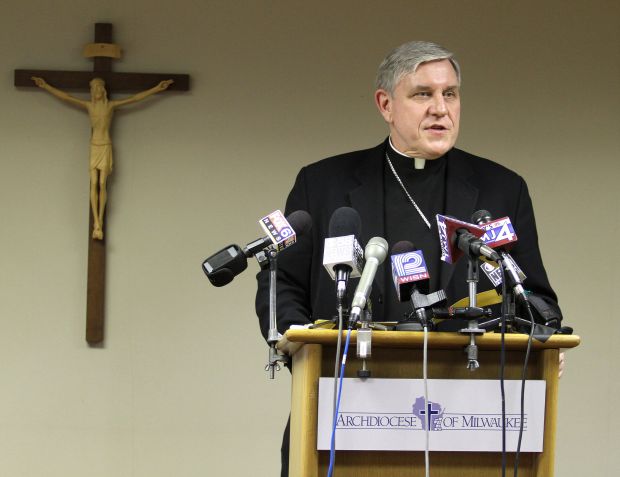 MILWAUKEE (CNS) — Attorneys for the Archdiocese of Milwaukee filed the archdiocese’s reorganization plan Feb. 12, with the U.S. Bankruptcy Court for the Eastern District of Wisconsin.

In a special edition of his weekly communique, “Love One Another,” which is sent to clergy, parish staffs and other church leaders throughout the archdiocese, Archbishop Jerome E. Listecki called the plan “the next major step toward ending the bankruptcy and returning our focus to the primary mission of the church; proclaiming the Gospel, worshipping more fully, and serving our sisters and brothers in need.”

The plan, which must be approved by Judge Susan V. Kelley, demonstrates a commitment by the archdiocese, according to the archbishop, to abuse survivors and to serving the people of God in southeastern Wisconsin.

“It’s time for us to get back to what the church is supposed to be doing. It’s time for the archdiocese to return its focus to its ministry. Outreach to and the support of abuse survivors will always be part of that ministry,” he wrote.

As he has regularly stated throughout his more than four years as archbishop, Archbishop Listecki apologized to abuse survivors, renewed his invitation to meet personally with them and reiterated the archdiocese’s “obligation to love and care for those who were harmed.”

The plan includes a Lifetime Therapy Fund — something which he insisted, since the archdiocese filed for bankruptcy on Jan. 4, 2011, had to be a part of the plan for as long as abuse survivors need it.

The archbishop noted that abuse survivors had told him “this is not about the money and I believe them.”

He continued, “No amount of money could ever be enough to restore what was taken from them. People were robbed of a part of their lives and I understand that nothing we do today can change that; nonetheless, I want to do the best I can to help abuse survivors.”

Archbishop Listecki wrote that the plan also gives remaining “unrestricted archdiocesan assets” to survivors of abuse by diocesan priests. In addition, the plan pays the cost of the bankruptcy, mostly accounting and legal fees — the latter, about which he wrote, have “depleted archdiocesan resources.”

He continued, “What many people do not realize is that the archdiocese must pay the lawyers on both sides. So every decision the creditors’ committee made to pursue assets like parish investments, school funds or other charitable trusts that didn’t belong to the archdiocese, depleted our resources even further.”

The archbishop noted that one archdiocesan asset was its insurance policies, and that “in the interest of abuse survivors” it had “aggressively pursued action against our insurance companies.” A settlement with Lloyd’s of London will provide “millions of dollars for the plan,” while the archdiocese will continue litigation against other insurers.”

Archbishop Listecki wrote that to ensure the plan will work financially, the archdiocese is selling what few properties it owns and converting them to cash by using them as collateral in securing a loan from the Cemetery Perpetual Care Trust.

“Instead of depending upon an unstable real estate market, we have been able to secure more for these properties by using them as collateral for this loan,” he wrote. “This puts an end to any speculation about the money that was always intended for cemetery perpetual care and avoids the expense of a lengthy court appeal, which could take another year or more.

“Since no bank would ever lend the archdiocese the amount of money needed to pay for the plan, this loan makes sense.”

Even with insurance money and the loan, the archdiocese expects to come out of the Chapter 11 reorganization with a debt of $7 million, according to the archbishop, because of the expenses for which it is responsible.

“The archdiocese has historically operated on a balanced budget, so the burden of paying off this debt will certainly be part of our penance,” he wrote. “I wish we wouldn’t have had to spend the past three years and millions of dollars on attorneys’ fees to get to this point, but now we have a plan that moves us forward.”

Archbishop Listecki expressed optimism about life in the post-bankruptcy archdiocese.

“I feel confident about the future of the church in southeastern Wisconsin. Confident because of the faith we share in Jesus Christ. Confident that the good work of the church conquers the evil of clergy sexual abuse,” he wrote. “I am confident, mainly because of you, the faithful Catholics in parishes across this archdiocese, who live your faith every day.”

As the archdiocese turns “a page on this ugly chapter of our history, the archbishop encouraged Catholics not to forget the past, but to look “forward to a future guided by the Holy Spirit.”

“Because of the lessons we’ve learned, we will be a stronger, better church as we continue to proclaim the Gospel, and continue our works of education, service and charity,” he concluded.

NEXT: Washington state’s bishops back governor’s moratorium on death penalty