Miami archbishop joins other bikers in ‘Ride With God’ fundraiser 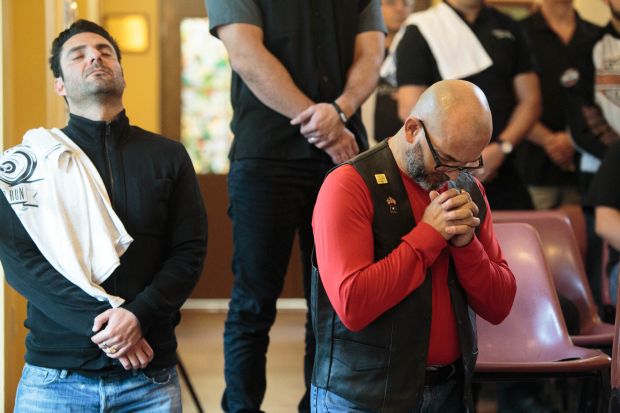 PARKLAND, Fla. (CNS) — Local computer systems engineer Pierre Victor’s Italian-made MV Agusta F4 motorcycle was evidence that almost any hobby or special interest can be an intersection for faith-sharing and awareness raising for a good cause.

“I’ve had 13 bikes and this is the best bike I’ve ever owned — nothing comes close to this; everywhere it’s a showstopper with people taking pictures,” said Victor, whose children attend Mary Help of Christians School in Parkland.

Standing around with some 150 other motorcycle enthusiasts, Victor and a handful of co-workers from the Coral Springs-based First Data company assessed other motorcycles and gave a detailed run-down of the modifications and upgrades to each machine.

There were all participants of the second annual Archbishop’s Poker Run to support Miami Catholic Charities-based programming for drug and alcohol rehabilitation.

“This ride was important to us and it has been very spiritual,” said Victor, a native of Haiti who is active in Emmaus ministry at his parish, Mary Help of Christians. The church was the starting place and site of the opening Mass for the Poker Run event Feb. 9 led by Miami Archbishop Thomas G. Wenski and in support of St. Luke’s Addiction Recovery Center.

“A lot of the people we’ve been meeting today are very down to earth, enjoying the ride; it’s very well planned,” Victor said, adding that he seeks out opportunities to be with other Catholic men — and women riders, too.

“It creates a brotherhood within the church being able to speak to each other knowing that if you need someone to talk to you have a ministry brother is there,” he told the Florida Catholic, newspaper of the Miami Archdiocese.

“One of our weaknesses as men is we don’t like to talk, and one of the things the ministry does is allows open up your heart and find counsel in Jesus Christ and know that there are other guys out there walking your same path,” he said.

This year’s Poker Run was a 72-mile charity ride from Parkland to Cutler Bay and featured several stops along the way where participants picked up a poker card toward a $500 gift certificate for the winning hand.

With the help of volunteers from local motorcycle associations, parishes and St. John Vianney College Seminary in Miami, the day began with a welcome reception and Sunday morning Mass, during which Archbishop Wenski told the gathering that Pope Francis recently raised a lot of money for charity by having a Harley-Davidson motorcycle that was given to him last summer auctioned off. 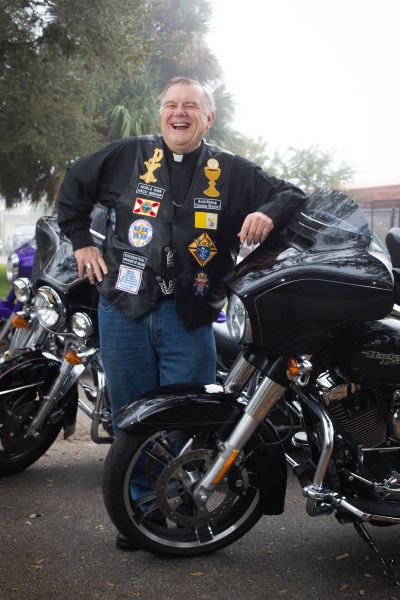 “Well, I’m trying to help a charity, not my giving my bike away but by using it to raise funds for the charity,” the archbishop said, to the congregation’s amusement.

He also spoke of the futility of a consumerist approach to religion that won’t give God much glory nor bring much relief to the hungry and oppressed.

“Jesus calls us to be salt and light — not consumers of religion seeking what God can do for us; but practitioners of a faith that seeks to act justly — giving both God and our neighbor his due,” Archbishop Wenski said. “We can call ourselves ‘practicing Catholics’ because this life is our one time chance “to practice” our religion until we get it right.

“But the point is, we must not just be ‘consumers’ of our Catholic religion; rather we must be practitioners.”

Funds from the Poker Run will assist the 32-bed facility at St. Luke’s in part by helping pay for mental health-related prescription medications for clients with no medical insurance, according to Sandra Valdes, program director.

The day began with an orientation meeting and the Poker Run participants this year included regional motorcycle riders of Jewish or other Christian denominations as well as a range of longtime riders and less experienced bikers, according to Rene John Sardina, president of the Chrome Knights Motorcycle Association in Miami, who spoke to the 150 participants about safety and rules for the event.

“It’s like the archdiocese meets rock ‘n’ roll, and the archbishop will be leathered up like a biker through and through — though he is very eloquent and has a sense of humor,” Sardina said. “People will come up to him and ask for a blessing during the run, and he takes the time and you are able to see that he doesn’t mind. It’s very touching.”

Katie Blanco Croquet, president of the Archdiocesan Development Corporation, said the Poker Run has quickly become one of Archbishop Wenski’s favorite events “because it combines a part of who he is as a person and people get to know him better as they ride their Harley’s, one of his favorite hobbies.”

Father Luis Rivero, archdiocesan campus ministry director and a Poker Run participant riding his three-wheel Can-Am Spyder motorcycle, agreed. He called the event a contemporary expression of Christian charity. Wearing his custom leather bikers vest which read, “Ride With God,” Father Rivera brought his own father with him this year.

“People have been quoting the Holy Father who has talked about getting out and ‘smelling like the sheep,’ and I think this is a wonderful opportunity to bring together people from all walks of life to help people with addictions at St. Luke’s,” the priest said.