Music ministry called a gift that can reconnect people with church 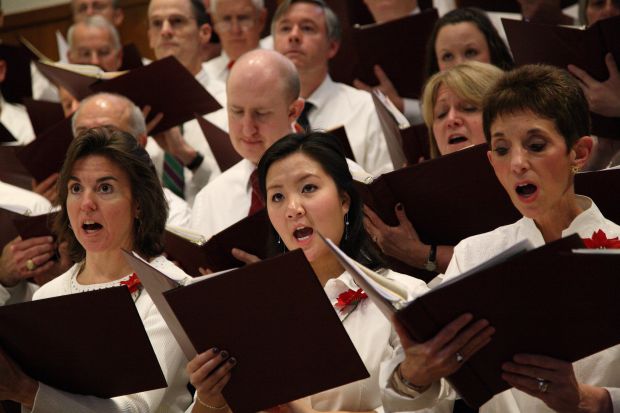 Strains of "Gloria in excelsis Deo" rise from the choir in December 2013 at Holy Family Passionist Retreat Center during a Christmastide Vespers Service in West Hartford, Conn. The center has a thriving music ministry that is seen as a model for other parishes. (CNS photo/Kevin Mihaly, Catholic Transcript)

WEST HARTFORD, Conn. (CNS) — Holy Family Monastery and Retreat Center in West Hartford, founded by the Passionist community of fathers and brothers in 1951, is famous for many reasons.

Holy Family’s retreat ministry, funded largely by the Mass card revenues, represents both the largest parish-based retreat center in the nation as well as the second-largest of any retreat center.

But the retreat center has another quality that few may realize — its thriving music ministry that has been a role model for other parishes.

Father David Cinquegrani, director of Holy Family as well as music director, started the monastery’s music ministry upon his arrival in 1996. He said the ministry is innovative, because it is intergenerational and includes groups often not found in large numbers in church, groups of high school and college students, seniors, and grade school students.

“There are many families, sometimes entire families, who participate. Husbands and wives, parents and children find it something spiritual that they can do together,” he said in an interview. “I try to feature family members with duets, trios and quartets when possible. Our music program serves the retreat center by providing both beauty and the opportunity to engage in music for worship and mediation.

“At the same time it gives the music ministers the ability to share their talents and enjoy doing what they love to do.”

Father Cinquegrani has an extensive background in music. He began playing the piano in second grade and studied piano for 11 years before entering college as a music major. He earned undergraduate and graduate degrees in music, while teaching music at every level from kindergarten through college for more than 30 years.

For the past 15 years, he has taught music at nearby St. Joseph’s College in West Hartford. In addition to his primary instrument of piano, Father Cinquegrani also can play flute, bass, guitar, organ and drums.

Members of Holy Family’s choirs have been energized by the writings of Pope Benedict XVI — in particular, an article in the Nov. 18, 2012, issue of The Universe, a weekly Catholic newspaper in the United Kingdom. It quoted the now-retired pope as saying that “sacred music can, above all, promote the faith, and what’s more, cooperate in new evangelization.”

“Music and singing that are done well can help people receive the word of God and be moved in a positive way,” the pope said.

Pope Benedict has urged church musicians to dedicate themselves to “improving the quality of liturgical song, without being afraid of reviving or emphasizing the great musical tradition of the Catholic Church.”

Sacred song “cooperates in nourishing and expressing the faith and, therefore in glorifying God and sanctifying the faithful,” he said. “Sacred music is not an accessory or embellishment of the liturgy, but is the liturgy itself.”

An active member of the Holy Family music ministry for the past six years is Jean Fitzpatrick, who attended the Christmas and Easter concerts for many years before becoming involved with the music program at the retreat center.

The clinical social worker is a member of two choirs, including the Bell Choir.

“I believe that music is a beautiful expression of community prayer. It enhances our connectedness to one another and through this connection, strengthens our relationship with God,” she said. “For those of us who participate in the music ministry at Holy Family, it is not only a gift to be part of it but it is also an opportunity to help others deepen their faith through music.”

Holy Family’s Christmas and Easter concerts have become something of a legend. At the end of each concert, the Holy Family Choir, Chamber Choir, Children’s Choir, Bell Choir and instrumentalists join in song with the entire congregation.

Hartford-area resident Lisa Bureau is not a member of the Holy Family music ministry but is a regular at the concerts.

Given how well-known the retreat center is and its Mass cards, Bureau predicted it won’t be too long before the center’s music ministry will start “a mini-revolution in the church in America as people see the power of music ministry.”

“My family and I have to get to these concerts more than an hour in advance to get a good seat,” she said. “The concerts are so powerful and I know of several people over the years that were disconnected from the church for many years and were inspired to return to attending Mass because of the Holy Family concerts.”