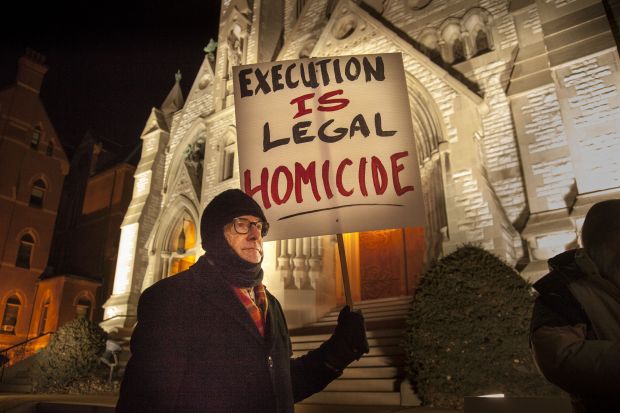 WASHINGTON (CNS) — International law, the risk of using inhumane methods of execution and opposition to capital punishment by the survivors of murder victims are among issues that are bringing fresh energy to debate about the death penalty.

In mid-January, Father Lawrence Hummer, of St. Mary’s Catholic Church in Chillicothe, Ohio, witnessed the execution of Dennis McGuire for the 1989 rape and murder of 22-year-old Joy Stewart, who was 30 weeks pregnant.

A week later, publications around the world were printing the priest’s account of watching what he called an inhumane procedure in which the convicted murderer struggled for 26 minutes while a previously untested mixture of drugs was used to execute McGuire.

At about the same time, the execution of a Mexican citizen drew international attention and warnings from the U.S. State Department that the refusal of the State of Texas to review the man’s conviction in light of an international court ruling might put U.S. citizens at risk while traveling abroad.

Meanwhile, in Colorado, the parents of a prison guard who was beaten to death by an inmate in 2002 are battling the county prosecutor for the right to be heard at the retrial of the man who previously confessed to killing their son.

While Robert Autobee supported the death penalty for Edward Montour at his first trial, he’s since had a change of heart. After meeting with Montour in prison, Autobee, also a former corrections officer, decided to forgive the repentant Montour and began working to save his life.

Montour’s original sentence was set aside after the Supreme Court ruled in 2007 that a judge cannot impose a death sentence without a jury having a role.

But, as described in a lawsuit filed Jan. 24 by Autobee and his wife, Lola, Arapahoe County District Attorney George Brauchler is trying to block the Autobees from participating in the sentencing phase for Montour because their position conflicts with his objectives.

“The Autobee family has experienced the immense harm caused, not only from the specter of the death penalty being imposed, but also its lack of healing potential,” reads the lawsuit.

“Because the Autobee family’s beliefs conflict with the prosecution’s agenda, the prosecution has ‘relegated them to the status of second-class victims,'” the suit says.

In a third situation in the news in January, Texas came under fire internationally and by the U.S. State Department for the Jan. 22 execution of Edgar Tamayo Arias, a Mexican citizen.

Tamayo was convicted in the 1994 murder of a Houston police officer. As statement from the State Department pointed out, Tamayo was entitled under international law to be notified about his rights to assistance from the Mexican consulate.

The Mexican government and U.S. Secretary of State John Kerry had pleaded with the State of Texas to review Tamayo’s conviction and sentencing as required under a 2004 ruling by the International Court of Justice. That ruling found the U.S. failed to provide consular access and notification to 51 Mexican citizens as required under the Vienna Convention on Consular Relations, to which the United States is a party.

“We have obligations under the Vienna Convention … for folks that are arrested in our country,” said Marie Harf, deputy spokesperson at the State Department in a Jan. 21 press briefing. “If we don’t uphold those obligations, it will make it much harder for us to ask other countries to do so. We take the security and safety of our citizens overseas very seriously. If they are arrested and held in detention, we want to be able to go to other countries and ask for these same consular access we are entitled to under the Vienna Convention.”

As to developments on execution methods, writing for the British publication, The Guardian, Father Hummer described meeting McGuire in November, hearing his confession and his prayers for forgiveness and agreeing to the inmate’s request that he witness the execution, along with McGuire’s family and Stewart’s family.

“I’ve seen people die many times before: in nursing homes, families I’ve known, my own mother,” he wrote. “In most settings I’ve found death to be a very peaceful experience. But this was something else.”

“There is no question in my mind that Dennis McGuire suffered greatly over many minutes,” Father Hummer wrote. “I’d been told that a ‘normal’ execution lasted five minutes — this experimental two-drug concoction had taken 26 minutes. I consider that inhumane.”

Graphic descriptions by the priest and other witnesses of watching McGuire’s stomach swell up and his 11-minute struggle for breath have led to at least one lawsuit – by McGuire’s parents – against the Illinois company that manufactured the lethal drug.

The drugs used to kill McGuire are a replacement for a three-drug combination used for years. But the European manufacturers of propofol, an anesthetic commonly used in U.S. hospitals, threatened to limit its export if it was used in executions.

PREVIOUS: Music ministry called a gift that can reconnect people with church