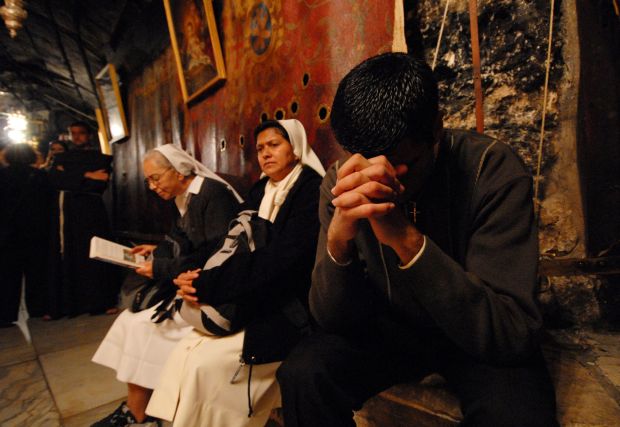 A Palestinian Christian prays in the grotto of the Church of the Nativity in the West Bank town of Bethlehem on Christmas Eve. (CNS photo/Debbie Hill)

WASHINGTON (CNS) — The Vatican’s apostolic nuncio to the United Nations told a congressional hearing Feb. 11 that “flagrant and widespread persecution of Christians rages in the Middle East even as we meet.”

Chaired by U.S. Rep. Chris Smith, R-N.J., the House subcommittee on global human rights listened to international experts testify about the rise in Christian persecution throughout the world.

The archbishop has witnessed the violence firsthand. Before taking the post as the permanent observer of the Holy See to the U.N., Archbishop Francis A. Chullikatt served as apostolic nuncio to Iraq and Jordan and lived in Baghdad from 2006 to 2010.

“This tragedy is all the more egregious when one pauses to consider that these men and women of faith … have been living at peace with their neighbors for untold generations,” the archbishop said.

The persecution of Christians in Iraq has increased in the wake of the country’s democratic transition. There and elsewhere religious minorities had enjoyed some amount of protection under the strict law and order enforced by previous rulers. Archbishop Chullikatt said that today, “because of the conflict, Christians are caught in the crossfire.”

He denounced the emerging “tradition” of bombing Catholic and other Christian churches on Christmas Eve, which has happened in the Middle East for several years.

When Smith asked Archbishop Chullikatt about the effect of persecution on children, the archbishop indicated that the damage is immense. “They live in fear … they go to schools, not even sure they will come back safe and alive.”

The archbishop also expressed concern for the future. “This is the kind of formation we are giving to the young generations who will become leaders,” he said. “It is a painful thing.”

The persecution of Christians is not limited to those living in the Middle East. The Pew Forum found that Christians suffered some form of harassment in 139 countries between 2006 and 2010, the largest of any other group. Other speakers at the hearing testified about violence against Christians in Indonesia, Vietnam, Nigeria, Myanmar, Sudan, and Eritrea, among others. Conversion laws in India, restrictions on worship in China, and denial of education or employment in various countries were cited as others forms of persecution against the world’s Christians.

John Allen, associate editor of The Boston Globe and a veteran journalist who has written extensively about Christian persecution, said many ignore the issue because of outdated prejudices.

“Say ‘religious persecution’ to most Westerners, and the images that come to mind are the Crusades, the Inquisition, the wars of religion,” Allen said. “The typical Christian in today’s world is not an affluent American male pulling up to church in a Lincoln Continental; it’s a poor black woman and mother of four in Botswana.”

Allen noted that two thirds of the world’s Christians live outside of the West, and more than half of that number live in poverty.

When Western governments such as the United States defend persecuted Christians internationally, their voice carries weight. Elliott Abrams of the U.S. Commission on International Religious Freedom said that the U.S. government needs to say that “we care, and this will affect our relations.”

“All too often, there are no sanctions, or there is double-padding — the sanctions for religious freedom are tacked on to other sanctions,” said Abrams. While Abrams clarified that sanctions are “a last resort,” and should not be used in every instance, “some form of economic sanction will get the message home.”

Another problem raised at the hearing is that the U.S. has not appointed a new ambassador at large for international religious freedoms, the State Department post established by the International Religious Freedom Act of 1998. The ambassadorship is the key position in the United States on religious freedom, and the seat has been vacant since October.

“If there is a long vacancy, it sends the message to other countries around the world of inattention and lack of concern,” said Abrams.

In his address, Archbishop Chullikatt said that Christians throughout the world must work together to ensure religious freedom for all.

“To this end,” he said, “it is crucial that every government guarantee religious freedom for each and every person.”