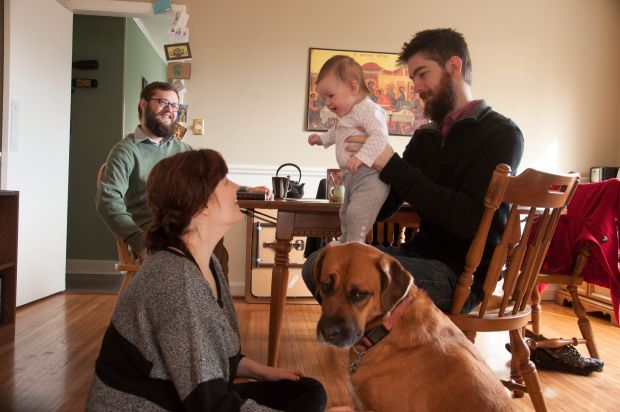 NASHVILLE, Tenn. (CNS) — In a small, unassuming brick house across the street from Christ the King Church, Jon and Natasha Stotts dote on their 3-month-old daughter Eloise, exchanging smiles as she plays on the living room floor. The dog eagerly sniffs the baby; the cat darts by and hides in a corner.

It’s a pretty typical scene for a young family enjoying a low-key day together at home.

But this is not exactly a typical household. The Stotts have a housemate, Will Hunter. On this day he’s sitting at the dining room table working on his laptop, under the watchful eye of Jesus and the apostles, looking down from a Last Supper painting.

Will, Jon and Natasha — and infant Eloise — are part of a new experiment in Christian community living, sponsored by Christ the King Church in Nashville, where they are members. They have made a one-year commitment to live together, share resources and volunteer at the parish.

“Radical Christian discipleship is something that shapes the kinds of decisions we make here,” said Jon Stotts, a doctoral candidate at Vanderbilt University Divinity School.

“We have a commitment to taking care of each other, and I’m not sure if we have a whole lot of people doing that. The wider culture seems to encourage everyone to take care of themselves,” Hunter told the Tennessee Register, Nashville’s diocesan newspaper. In this house, “we’re trying to model what a good Catholic family would do, in a nontraditional way.”

It was Patout Burns, a Vanderbilt Divinity School professor and Christ the King parishioner, who suggested the idea of having divinity students live together in the house.

“The parish was talking about what kinds of things could be done to develop community,” said Joceline Lemaire, Christ the King director of adult formation. The parish needed a bridge between young adults and the older generation, and the community house could provide that bridge, she said.

“They offer a lot of good service in the parish,” Lemaire said. The parish owns the house and gives the residents reduced rent, “but they’re working for it,” she said. “These two guys are so bright and knowledgeable, and really gifted,” Lemaire said.

And both are deeply committed to the Catholic faith. Stotts spent time at St. Meinrad Archabbey in Indiana and Hunter is contemplating a vocation to the priesthood. He’s visited the Trappist monks at the Abbey of Gethsemani in Kentucky and recently participated in a weeklong Jesuit retreat. He’s also a Benedictine Oblate. “I’m really drawn to the prayer and work” ethos, he said.

Stotts is a presenter for the current “Everyday Theology” Wednesday night series at Christ the King and Hunter was a presenter at a recent series on Dorothy Day and the Catholic Worker Movement.

“Thomas Merton and Dorothy Day are the biggest influences on my approach to Catholicism,” said Hunter, a Vanderbilt Divinity student and a convert to the faith.

Day, along with Peter Maurin, founded the Catholic Worker in New York during the Great Depression; Father Merton was a Trappist monk at Gethsemani and an acclaimed writer.

“The two strands that run through Dorothy Day’s life — her social consciousness and her political activism, and the mystical side of her — I’m really interested in that combination,” he said.

While Hunter and the Stottses are not cultivating an outreach or activist household, they are focused on building community, among themselves and among Christ the King parishioners.

“It takes a different set of values and virtues for doing outreach versus living in community,” said Jon Stotts. “It’s really hard work to live with other people outside of a vow” of marriage or religious life, he added.

“It’s harder than I thought to live with another person and start a family,” said Natasha Stotts. The couple lived in the house with Hunter for just two months before Eloise was born, barely enough time to get into a rhythm. After the baby came, “we realized we were being reclusive with our time,” she said. “We had to make an effort to reconnect with Will.”

The group tries to have Sunday night dinners together to catch up and touch base about any household issues that need addressing. They also try to make time and space for prayer, separately and together.

These young people are embracing their unusual living arrangement to show people that there is another way to live, a way not defined by individualism and financial success. “We’ve been living under a paradigm that says there’s no alternative for so long,” Hunter said. “It’s really exciting to do something different.”

Energized by Pope Francis’s consistent message to rein in consumption and create a more just economy, young adult Catholics are excited to get back to church these days, Hunter said, and he and the Stottses hope to build on that newfound enthusiasm.

“Pope Francis is pointing us back to the social teachings of the church,” Hunter said, and his words and actions provide a lot of good topics for discussion.

Natasha, Jon and Will look forward to hosting more parish groups centered on food, drink and good conversation. “I think people are really starved for a connection,” said Jon Stotts. “We want to create a space where people can come without pressure to do or be anything.”

Laurence is a staff writer at the Tennessee Register, newspaper of the Nashville Diocese.

NEXT: Miami archbishop joins other bikers in ‘Ride With God’ fundraiser