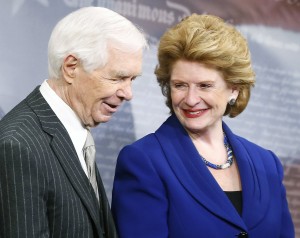 WASHINGTON (CNS) — With a 62-38 vote Feb. 4. the U.S. Senate passed a five-year comprehensive farm bill, a measure President Barack Obama said was “not perfect” but “on the whole will make a positive difference” for rural economies and the nation at large.

House passage came Jan. 29, two days before a second extension of the 2008 farm bill was to expire.

The new bill “will build on historic economic gains in rural America over the past five years, create new jobs and opportunities, and protect the most vulnerable Americans,” said Obama, who said he would sign the measure into law Feb. 7 during a visit to Michigan, the home state of Democratic Sen. Debbie Stabenow, chairwoman of the Senate Agriculture Committee.

While Catholic groups and other rural advocates were urging passage of a farm bill, their support for the House version of the bill was muted, largely because of an $800 million cut in food stamps a year and the deleting of agricultural reform measures from the version of the bill that came out of a joint House-Senate conference committee.

What praise there was to offer dealt largely with the conferees’ ability to put together a compromise bill despite their partisan differences.

“While we are disappointed that the final compromise continues to call disproportionately for sacrifices from hungry and poor people in this country and around the world, especially when large industrial agricultural operations continue to receive unnecessary subsidies, we are glad to see support will continue for domestic and international nutrition and development aid, rural development and conservation,” said a Jan. 29 statement from Archbishop Thomas G. Wenski of Miami, chairman of the U.S. bishops’ Committee on Domestic Justice and Human Development.

“We are disappointed to see that necessary reforms to farm commodity programs and payment levels have been struck down in the final bill,” said James Ennis, executive director of Catholic Rural Life, in a Jan. 29 statement. “Congress needs to close loopholes and set real payment limits. By doing so, the farm bill will help to save hundreds of millions of dollars and take a step towards leveling the playing field for all family farmers.”

In a Jan. 27 email sent to its members, Catholic Rural Life had urged a “yes vote” on the House bill, despite its “failings in reforms.” The organization said passage would at least “ensure some stability in farm, food and conservation programs for the next several years.”

In a Jan. 30 posting about the House vote on Catholic Rural Life’s website, Ennis said: “The apparent backroom deals do not represent the kind of democratic process we deserve as citizens. As devoted farm and food advocates, we believe our voice is as necessary as commodity organizations and agribusiness interests. Who else can articulate enlightened policies for a new agriculture of sustainable practices and vibrant rural communities?”

Even with passage of this farm bill, Ennis added, “we will not stop in working for real reform in farm and food policies. Much can be done at the local, state and regional levels. Much can change on the farm by the food choices we make at the store.”

Father Larry Snyder, president of Catholic Charities USA, also weighed in on the House measure in a Jan. 29 statement.

“We continue to be concerned that those who are most vulnerable will bear the greatest burden when cuts are being considered in any programs that address poverty in this country,” he said. “However, we realize that tough choices may have to be made and encourage our country’s decision-makers on this 50th anniversary on the war on poverty to commit to ensuring that millions of our brothers and sisters are not being left out or left behind.”

“We welcome the renewed commitment by Congress to programs that tackle root causes of chronic hunger and appreciate its foresight in making programs more cost effective so we can serve more people with the limited resources available,” said Bishop Richard E. Pates of Des Moines, Iowa, chairman of the U.S. bishops’ Committee on International Justice and Peace, also in a Jan. 29 statement.

National Farmers Union president Roger Johnson, in a Jan. 28 statement, said he was “encouraged by the inclusion of robust mandatory funding levels for renewable energy programs” in the bill. “We’re also very happy that the bill preserves the ability of American family farmers and ranchers to distinguish their products in the marketplace through the existing country of origin labeling law.”

The House approved the bill, which ran 959 pages, in a 251-166 vote. Its passage was not guaranteed because the House last year rejected a compromise farm bill, instead passing separate, smaller pieces of agriculture-related legislation, including a bill that would have slashed SNAP, formerly known as food stamps, by nearly $40 billion over 10 years.

NEXT: Archbishop warns against any ‘affiliation, support’ for abortion clinic