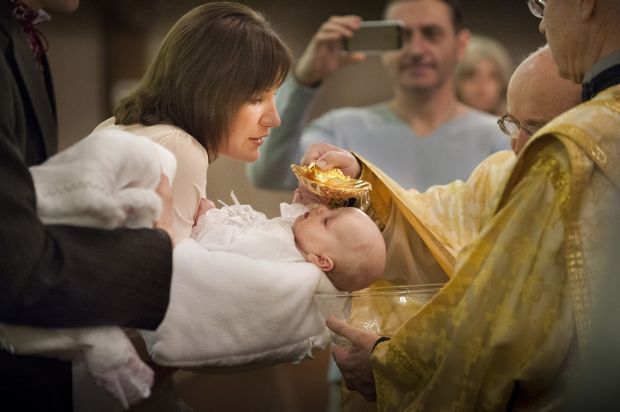 ST. LOUIS (CNS) — Olga Shulga said her father has never lived in fear. So when she learned he had joined the protesters in Independence Square in Kiev, Ukraine, she wasn’t all that surprised.

Shulga and her husband, Alex, members of St. Mary’s Assumption Ukrainian Catholic Parish in St. Louis, are among those prayerfully watching as the unrest continues to unfold in Ukraine.

“My father will fight with everything he has, because we were raised Ukrainians,” said Olga Shulga. But the 37-year-old, who came to the United States from Kiev almost 15 years ago, worries about her family members who have frequently been bringing food and other necessities to protesters or stand with them in solidarity.

The ongoing protests started last fall after Ukrainian President Viktor Yanukovych withdrew from a promised trade deal with the European Union. The situation has brought together members of St. Mary’s Assumption to support one another and their homeland as they watch from afar. In mid-January, parishioners took up a collection to be sent to support protesters.

In the Archdiocese of Philadelphia, Archbishop Charles Chaput called on Catholics to support the struggle for religious and civil liberties in Ukraine through prayer and action, specifically by pressuring the U.S. government to intercede. (Read the archbishop’s message dated Jan. 30 here.)

Many of the parish’s 30 households are recent immigrants and some came after the downfall of the Soviet Union in 1991, said the parish’s administrator, Deacon Eugene Logusch.

“The people in Ukraine have no fear,” he said. “They are prepared to stand up and they want change. They don’t want the country to continue in this way and the government was completely shocked” at the reaction.

Shulga said that while her heart is with her family, she’s grateful for the opportunities she’s had in the United States. In Ukraine, “there’s no future there. That’s why I left. It’s a fight for every person to build a new life for you and your family,” she told the St. Louis Review, newspaper of the Archdiocese of St. Louis.

United States and EU officials criticized the legislation, and the Ukrainian parliament Jan. 28 voted to repeal the new laws. At the same time, Ukrainian Prime Minister Mykola Azarov resigned in an effort to end anti-government protests.

In December, members of the permanent synod of bishops of the Ukrainian Catholic Church went to Kiev’s Independence Square to lead morning prayer. Fears of a violent crackdown gave way to cheers as the police withdrew. In January, the church received a letter from the Ukrainian Ministry of Culture complaining of a “systematic disregard for the law by some priests” with “alleged support from the church authorities.” The letter also threatened to revoke the church’s legal status.

The letter, signed by deputy minister Tymophy Kokhan, cited Ukraine’s Law on Freedom of Conscience. Article 21 restricts religious services, unless otherwise authorized, to religious buildings, places of pilgrimage, private homes and cemeteries. At the same time, Ukrainian Catholics and other Christians have continued to erect “prayer tents” at demonstration sites.

Major Archbishop Sviatoslav Shevchuk of Kiev-Halych, head of the Ukrainian Catholic Church, and the leaders of other churches and religious groups met Yanukovych Jan. 24 and offered to mediate in the name of peace.

“Our church has always been true and will remain so for the future mission that Christ the Savior entrusted, despite all the threats,” said Archbishop Shevchuk.

Yuriy Safronov, a parishioner at St. Mary’s Assumption since 1993 when he immigrated to St. Louis from Ukraine as a 27-year-old, said he participated in a peaceful hunger strike in Kiev in the early 1990s with people of many different faiths.

The church then and now, he said, followed the people, not the politics. “They don’t give political opinions, but faith opinions.”

For Safronov, witnessing the current unrest in Ukraine is akin to the movie “Groundhog Day” — which continually repeats the same day. “People are living the same thing over and over,” he said, “but now it’s at a different level.”

Deacon Logusch said technology is a factor in this current conflict, like it hasn’t been in the past. For events such as the downfall of the Soviet Union in the 1990s, or the Chernobyl nuclear explosion accident in the mid-1980s, Ukrainians abroad had much less information on which to rely.

“Ukraine, at least until now, has been relatively open, relatively free and democratic,” he said. “This is now the age of the cell phone, this is the age of Skype and the Internet. This whole crisis is happening and has unfolded as rapidly as it has because of technology.

“Just in the last four to five months, two independent Internet TV stations have launched and provide 24-7 coverage of the street events,” he said. “They’re bringing on commentators and experts … and all of this is completely beyond the control of the government.”

The Ukrainian people are much more connected to their homeland than before, said Deacon Logusch, whose parents came from Ukraine to New York City, via Germany, in 1949.

Nowadays, it has been relatively easy for Ukrainians to travel back and forth between their home country. “Young couples with children have had grandparents come here several times. It’s unlike anything that’s ever existed before.”

“In previous generations, being Ukrainian or Ukrainian Catholic was totally bound up with your parish,” he said. “That’s not the case (anymore) — through this miracle of the Internet, they feel far more informed and connected.”